Looking for affordable drain cleaning in Columbus, OH? Great! Mr. Blue Plumbing is at your service 24/7. 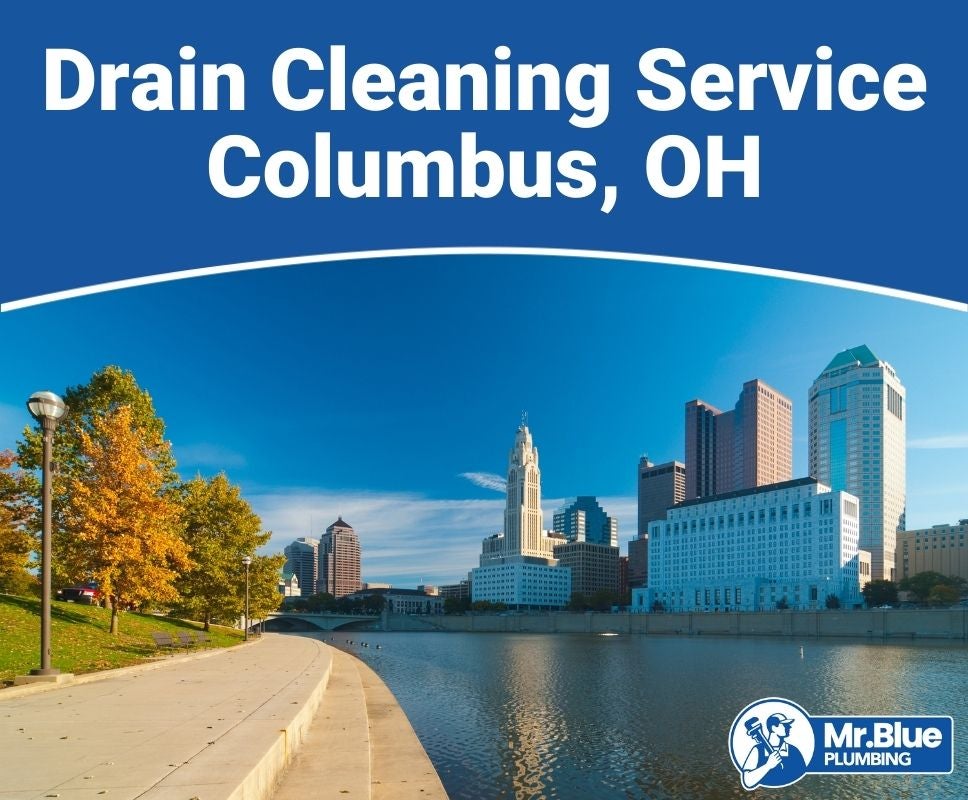 Tell us about your clogged drain issue in the form and we'll get you connected with a Mr. Blue Plumbing expert in Columbus today!

What Are the Most Common Drain Clog Issues in Columbus?

A significant amount of rainfall occurs every year in Columbus, sometimes more than the national average. Residents here know this kind of rainfall can lead to severe drain clog issues in various ways.

Our plumbing team sees drain clogs all too frequently in Columbus, even during the summer. One of the most common drain clog issues we see is slow drains in sinks, showers, or tubs. Many residents let these go too long because they think it’s a temporary problem that can fix itself.

It usually won’t and means something is going on in the drain needing more professional attention. The most common reason for recurring drain clogs is simple human hair building up in the drain system.

Other times, it might mean a more severe clog deeper in the sewer line. Residents sometimes try to fix these drain clogs by using store-bought liquid drain clog solutions. These may or may not resolve the issue.

Perhaps the drainage system needs more work if clogs become more acute. Even worse is when foul odors are detected when experiencing clogs. A bad smell usually means pollutants are backing up in the drain, causing the odors. Once in a while, this might be the unfortunate sign of pipe breakage.

We also frequently encounter the worst clogging issue: a flood in the home due to sewage backup.

You can prevent all of these issues with proper plumbing maintenance and inspections. Doing so helps save on the inevitable costs of the repairs.

How Much Does Drain Cleaning Usually Cost in Columbus?

There isn’t any way to give a definitive pricing quote on drain cleaning cost since so many factors are involved. It could be very affordable or borderline expensive.

Basic averages say around $250 maximum for most basic drain cleaning jobs. The cost might also go to $750 for something more complex. No resident should expect this to be set in stone.

The Location of the Clog

The clog’s location makes a considerable difference in how much a repair bill is. A clog in the home typically costs a little less since it doesn’t involve digging up the ground to tend to a water pipe.

A more complex clog in the sewer line requires working outdoors and possibly a couple of days of work inspecting and repairing the pipe. It would be equally costly if the clog is due to pipe deterioration within the home.

Keep in mind if a clog occurs on the side of the City’s water lines, they’ll be the ones repairing it. Most residents need a proper plumbing inspection to find out for sure.

The Severity of the Clog

Clogs can range from very minor with simple fixes to complete clogs requiring extensive work. A more extensive clog is going to take more labor time, possibly longer than we can estimate.

When clogs occur in the sewer lines, it might mean digging up the ground to gain access. If the clog is on the City’s side, it might take longer to get the job repaired based on their schedule. However, at least they won’t charge you for the work.

We’ll give you as clear of an estimate as possible about what you might pay based on the diagnosis of the clog. Even a minor clog might need extra work and may not be easily fixed with a product like Drano.

Use of Video Technology to Diagnose the Clog

Sometimes we might have to send a video camera down into the pipe to see what’s causing the clogging issue. Thanks to small cameras being very small now, advanced technology provides a more precise diagnosis of what’s going on. These cameras were not available just a decade ago.

Due to the cost of these cameras and the time it takes to send them down into the pipe, expect prices to go up.

The best news about sending waterproof cameras down into a resident’s pipes is that it can find a faster way to get the clog fixed.

Does the City of Columbus Provide Any Assistance for Clogged Drains?

Residents should never forget that two sides exist when it comes to water lines in Columbus. The homeowner owns one side and the City owns anything beyond there.

Sometimes it’s hard to tell where that line is without having a city official or plumber inspect underground water pipes on the property. Still, if a drain clog happens in one’s own home, the resident is entirely responsible for getting the clog fixed.

Things might be a little different if the clog is due to a sewer drain issue. When this occurs on city property, it’s the responsibility of Columbus’s water utility, The Division of Water. Fixing a clog on their side of the water line might require them to hire a plumbing service like us to take care of the issue. Should they not, it’s impossible to know how long it might take for them to amend the problem.

One thing Columbus does offer is tips for residents on how to prevent clogs in household drains. For instance, they offer a FOG Reduction program, which stands for Fats, Oils, and Grease control.

Many residents in Columbus (and across the U.S.) frequently pour those three substances down into their kitchen sink drains. It can create sewer blockages as a result, leading to significant repairs. The page for FOG Reduction notes these substances frequently do further damage like sewer overflows into local waterways or causing floods in basements.

It always costs the City as much as $2,000 for basic grease blockage service. They may also face fines for these substances getting into waterways. In turn, this passes on more enormous water bills to Columbus residents.

Thanks to Columbus’s basic ordinances related to FOG Reduction, sewer blockages don’t have to happen very often. Regardless, other things can undoubtedly cause drain clogs beyond dumping food remnants into garbage disposals.

Do Certain Water Contaminants in Columbus Cause Drain Clogs?

The quality of water in Columbus is generally good, thanks to independent studies by the Water Quality Assurance Laboratory. Yet, contaminants can still get in the water supply, often leading to drain clogs.

A common occurance is general hard water issues due to various minerals, mainly calcium and magnesium. Those minerals don’t necessarily cause clogs on their own. Hard water interacts with more human things in drains, namely soap scum and hair.

Soap scum, in particular, can harden in water pipes so solidly, it requires extensive plumbing work to get it loosened. When we discover a clog is due to hard water, we usually remedy this with a water softener. We also recommend water purifiers, which are easy to install right at the base where the water supply line begins.

Hard water is a continual problem, albeit other contaminants cause just as many clogs. Take a look at these four examples:

Another problem nearly as bad as FOG is residents flushing paper products down their toilets. We often find out residents have been flushing down napkins or paper towels, leading to significant clogs in the line.

Most toilet pipes were not designed to handle thick paper like this. As convenient as it might be to flush down sanitary wipes in the bathroom, think about what it might do in creating expensive plumbing bills.

It’s best to stick with toilet paper if flushing down any type of paper.

Even though iron is a natural part of the world, no resident should contend with iron in their water. When it starts collecting in water pipes, it generally hardens and begins to cause clogs.

During inspections, we also notice iron can frequently collect around the mouths of indoor faucets, something that can also cause clogging.

To amend the problem, we recommend water filters or softeners to keep iron out of the water from the source.

An all-too-common problem with clogging is the presence of general sediment collecting in the water supply. A way to tell if you have sediment in your water lines is to see if a glass of tap water has lingering cloudiness.

All water from the taps should be clear, though cloudy water tells us sediment is building up in the pipes. It can also harden and cause issues with proper water flow.

Only a professional inspection can tell. Never hesitate to call for a check to know for sure.

One of the most dangerous contaminants is lead, which is something that can do more than just cause clogs. As everyone knows, lead can also cause serious health issues if consumed through water usage.

Columbus has done much to help get rid of aging water pipes made from lead. Nevertheless, some older homes still use old water pipes where lead could be a problem.

Who Is the Water Utility Company in Columbus?

As mentioned, all of Columbus’s water utility work is handled through the City, but Aqua Ohio is the primary water provider. They serve as many as 500,000 residents throughout Ohio, including Franklin County, where Columbus is.

Public trust with Aqua Ohio is solid based on their extensive history in the area. Formed as far back as 1853, they’ve gone through numerous acquisitions through the years, leading to the name they have now.

In 2012, they utilized the name they use today, using eight other water systems and three wastewater systems in the State.

To help prevent water issues that might lead to clogs, Aqua Ohio offers helpful information about lead and other contaminants in the water, like chromium. It’s noted the levels of chromium here are well within the EPA’s limits.

Recent Requests We Received From Customers In Columbus, OH

I have a 8 inch storm drain about 240 ft that needs scoped and/or maybe cleaned out.

kitchen drain is clogged at the wall. I snakes it 8 ft but can't get it unplugged.