Looking for an affordable plumber in Mobile, AL? Great! Mr. Blue Plumbing is at your service 24/7. 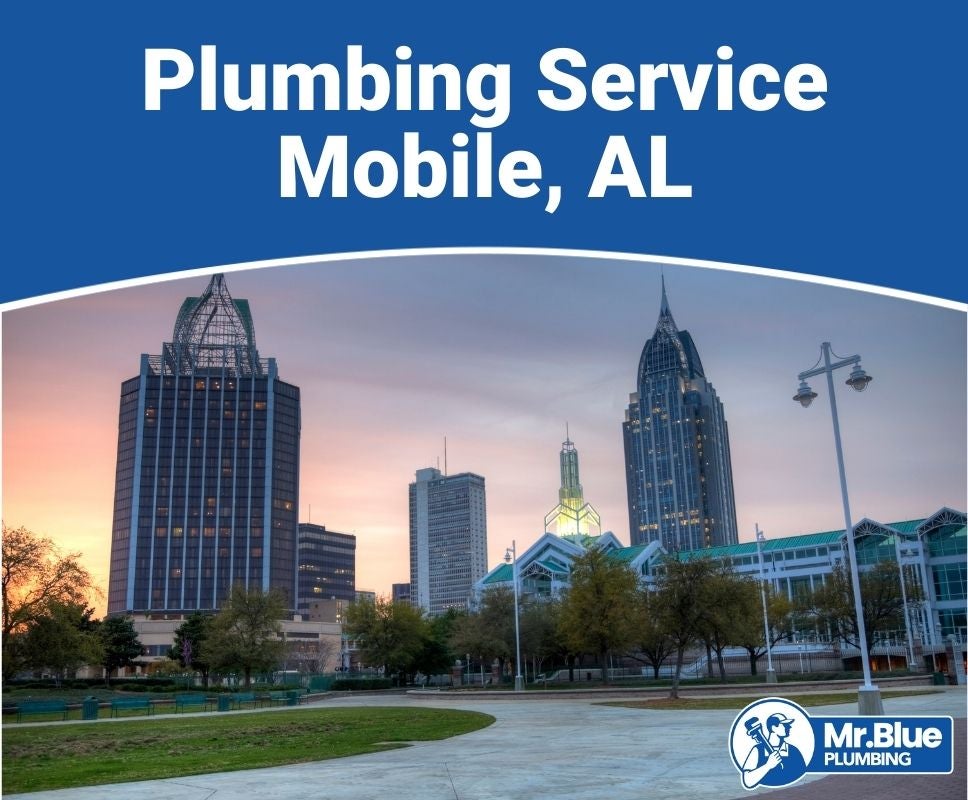 Tell us about your plumbing issue in the form and we'll get you connected with a Mr. Blue Plumbing expert in Mobile today!

What Are the Most Common Plumbing Issues in Mobile?

Plumbing issues in Mobile vary depending on the age of the home and the quality of materials and products installed. Nonetheless, the most common issues we have dealt with include:

Leaky faucets are among the most prevalent plumbing issues we handle in Mobile, since we have soft water, which can corrode fixtures. Probably because a drippy faucet is so annoying, no one can stand the irritating noise one night after another. Besides, leaks can be wasteful. The U.S. Environmental Protection Agency (EPA) reports that leaks can cost a family 180 water gallons per week. Not forgetting the excessive moisture can ruin the fixtures and surrounding structures. Irritating as they may be, a quick fix is possible. This often involves repairing or replacing a worn or improperly installed O-ring, washer, valve seat, or cartridge.

Leaks are quite a challenge in Mobile City, and leaking pipes are yet another troublesome plumbing issue. The problem is prevalent in homes with copper pipes, which makes it a huge problem in Mobile since many Mobile homes were built before the era of PEX pipes.

As the weather changes, pipes expand and contract, which leads to loosening of joints over time and subsequent leaking. Copper pipes are also susceptible to corrosion, leading to pinhole leaks.

Leaks are also caused by pipe cracks and bursts, though rare, especially where trees are planted near buildings. Mobile has an abundance of trees, which are beautiful but can cause issues with underground plumbing. As the trees spread out their roots, they exert pressure on the pipes, resulting in cracks or loosening at the joints.

Leaky toilets are not as pesky as leaky faucets unless they’re self-flushing occasionally, freaking out everyone. Running toilets usually go unnoticed though they’re pretty common. They silently leak water down the drain, which is hard to spot. Often, we diagnose the problem when customers call us with issues of faulty toilet handles. According to U.S. Geological Survey (USGS), running toilets can waste up to 22 water gallons per day.

Sometimes customers call us over low water pressure, which in most cases has nothing to do with the water supply company. Plumbing issues such as leaks, especially where they are hidden, often result in low water pressure. In some cases, pipes get blocked by either invasive tree roots or limescale buildup. These last two causes are rare, but they do occur, especially in older homes.

Water heater issues are also common. Water not warming, heater inefficiency, leaks are some of the problems we come across. While some can be fixed by repairing broken parts, others are due to excessive wear and tear, which happens as the heater ages. In such a case, we often recommend heater replacement, especially if it has outlived itself.

Clogged bathroom drains and sinks are a universal plumbing system trouble and are pretty common in Mobile City. Hair and tissues on bathroom and laundry room drain, food particles in kitchen drains are among foreign deposits that accumulate and block the lines. Though there are over-the-counter unclogging products sold in the market, we often advise against their use as they are too harsh for the plumbing system.

How Does the Water in Mobile Affect Your Plumbing?

Mobile Area Water & Sewer System (MAWSS) is the primary drinking water supplier in Mobile City. The water comes from Big Creek Lake and is usually soft. Water hardness or softness is determined by the concentration of ions, with magnesium and calcium being the main minerals.

According to the U.S. Geological Survey (USGS), water hardness varies as follows:

Mg/L stands for milligrams of calcium carbonate per liter of water. Tests on our water indicate a calcium carbonate quantity of 43 mg/L, which makes it soft. Though hard water causes most woes on plumbing systems, soft water is also damaging.

Usually, soft water has a corrosive effect on metallic plumbing pipes, fixtures, and appliances. This occurs due to the low amount of ions in the water, which causes it to leach minerals out of the metal. With time, the pipes and fixtures develop pinholes and start leaking.

According to the Environmental Working Group (EWG), our water has passed the federal safety standards but still contains 17 contaminants, eight of which exceed the group’s health guidelines. Harmful contaminants include chlorite, chloroform, haloacetic, and chromium. Some of them corrode metallic plumbing products, while others disintegrate the rubber linings.

How Much Does Plumbing Usually Cost in Mobile?

Mobile plumbers usually cost plumbing projects depending on several factors. Among the factors, we consider at Mr Blue Plumbing, materials, labor, and project type are the main ones.

Mr. Blue Plumbing plumbers in Mobile and across the nation often charge hourly rates, depending on their expertise and the project complexity. Projects requiring master plumber expertise often command higher rates than those that a journeyman plumber can handle. Similarly, complex projects such as installing a pool also call for higher rates than installing a water supply line.

Our quotes usually range between $45 and $200 per hour. However, we typically charge a flat rate for smaller projects, such as fixing a drippy faucet or unclogging a drain.

Even though we charge standard hourly rates, the quotes vary from project to project, depending on its complexity. For instance, installing a bathtub can cost about $1800, while sump pump installation can cost $900 on average. Cleaning a sewer line can cost $200 on average, while cleaning a septic tank costs slightly higher, about $250.

Our quotes often include materials (e.g., toilets, sinks, hot tubs, pipes, etc.) unless you have pre-purchased them. Generally, materials are a significant cost factor that affects a project based on your preferences. If you prefer high-end products, the cost will be higher than if you were using standard products. The type of material also impacts the price. For instance, using copper pipes can cost you multiple times higher than PEX pipes.

Can Better Plumbing Save You Money in Mobile?

Some of the ways you can save through better plumbing include:

According to the U.S. Geological Survey (USGS), each American uses roughly 82 water gallons per day. Environmental Protection Agency (EPA) observes that households can cut down their daily water usage by replacing the fixtures and appliances with WaterSense models.

For instance, installing a WaterSense toilet can reduce water usage per flush from 1.6 gallons to 1.28. WaterSense showerheads and faucets also utilize water-saving technology, leading to significant savings estimated at least 20%. On average, a family can save between $100 to $400 in water bills annually.

Upgrading your conventional water heater to a tankless model can lead to significant cost savings over the heater’s lifetime. An on-demand heater warms only the water passing through it, which reduces the energy costs associated with traditional models. They also last longer and have fewer mechanical issues than the tank-type models. Usually, a tankless water heater lasts for about 20 years, double the average life of a conventional model.

Usually, supplying water requires maintaining a certain pressure level to avoid contamination by bacteria and other pathogens. However, the higher the water pressure, the higher the usage per minute. Generally, the recommended pressure levels are between 60-70 psi (pounds per square inch), with the minimum being 20 psi. Installing pressure-reducing valves to cap the pressure at about 35 psi can drastically reduce your water consumption, hence your bills.

When Should You Call the Water Utility Company in Mobile vs Hire a Plumber?

If your taps suddenly run dry or the water pressure reduces drastically, you may get confused about whom to call – the water utility company or the plumber. Below are a few distinctions between when it’s ideal to call either.

When Do You Need Permits for Plumbing Service in Mobile?

The City of Mobile requires that you obtain a permit before hiring a plumber for significant plumbing work. This includes original installations, remodeling, repiping, and any replacements or repairs that involve rearranging fixtures, pipes, or valves. Generally, each plumbing installation is charged individually, but the minimum you can pay per permit application is $10.

However, you do not require a plumbing permit for works such as stopping leaks in drains, soil, water, waste, or vent pipe, clearing stoppages, repairing leaks in fixtures, pipes, or valves reinstalling water closets.

Recent Requests We Received From Customers In Mobile, AL

I will take out existing wall tile and fiberglass tub down to the studs leaving old drain in tact. Looking for an estimate on New bathtub installation.

I have an existing shower/tub combo. There is a leak behind the wall when the shower is turned on, but no leak when using the tub spout.

We would like to add a handicap rail (stainless steel) to our existing tub/shower stall. Please provide estimate and timing. Thanks!

replace tub and shower, same footprint. email or text only.

Need shower or bath shower installed in upstairs half bath.

How much is the labor cost to replace a water heater.