Looking for an affordable plumber in Mission Viejo, CA? Great! Mr. Blue Plumbing is at your service 24/7. 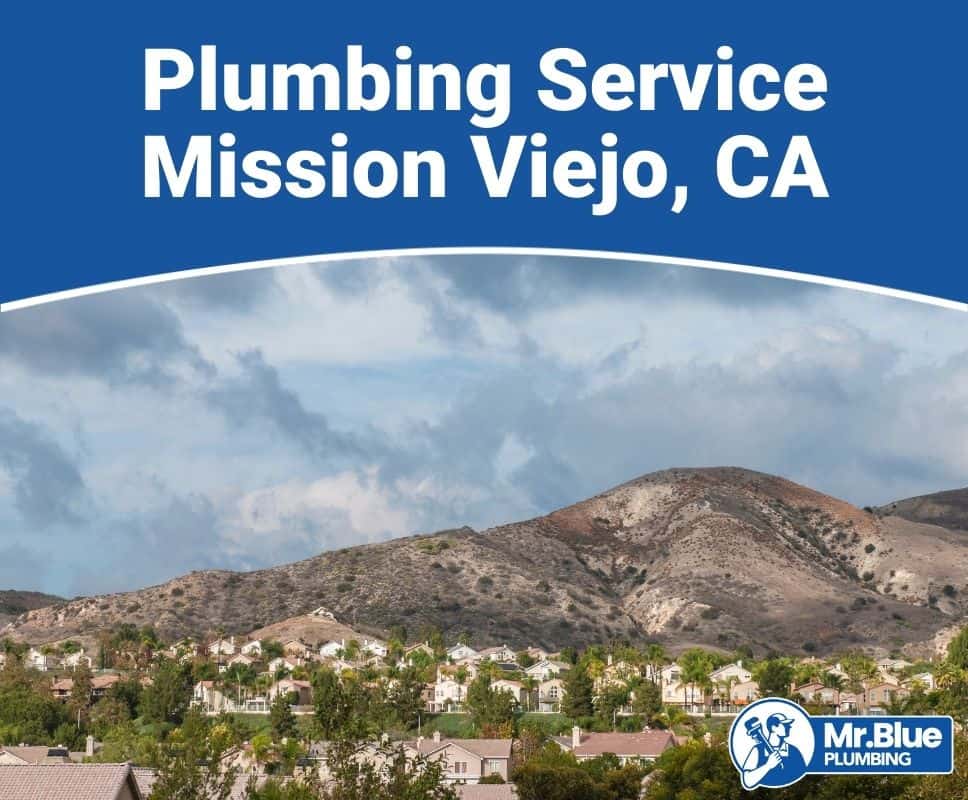 Tell us about your plumbing issue in the form and we'll get you connected with a Mr. Blue Plumbing expert in Mission Viejo today!

What Are the Most Common Plumbing Issues in Mission Viejo?

Unlike a slowly failing HVAC system, when you notice a plumbing failure, it’s already too late to put it off until later. Mission Viejo residents face these five common plumbing issues.

First, let’s discuss how Mission Viejo gets its municipal water. The city is part of the El Toro Water District (ETWD), and like 90% of Orange County, is dependent on imported water. If you’re new to the city, this may seem confusing, but not to worry. You don’t have to buy cases of bottled water, rather it flows through pipes from the Colorado River and the Sacramento Bay Delta through the State Water Project. If you want the background on water importing in Southern California, watch Chinatown – it’s way more entertaining than reading about it. At any rate, Mission Viejo is 100% dependent on outside water sources. Lake Mission Viejo is the ETWD’s largest water reservoir, not just a great place to play.

One of the side effects of importing water that lots of households in Mission Viejo occasionally have to deal with is low water pressure. Although the water comes into the city at a high-pressure level, sediment buildup in the pipes can cause pressure to weaken as it hits your faucets.

Garden-variety drain clogs can be as mundane as veggie peelings that didn’t break down in the disposal or be a sign that there’s something a lot more serious going on, like a blocked sewer pipe. If you notice that you’re plunging the sinks or running a snake down the shower drain with increasing frequency, there is a good chance that the real culprit is farther down the sewer line. Since Mission Viejo has hard water, minerals from the water can accumulate in your pipes and create blockages.

Leaky faucets aren’t confined to sinks and showers. A toilet that’s constantly running (at least until you jiggle the handle) is also a leaking faucet. A slow drip may seem like it’s a nuisance more than anything else, but the truth is that a neglected drip will eventually damage the fixtures and run up your water bill. Poor workmanship often also leads to the majority of plumbing system leaks. Leaks can also be caused when the plumbing materials rust, erode or break down from wear and tear or even abrasive chemicals.

No matter how often we are told not to put foreign objects (really, anything but dedicated toilet tissue) down the potty, plumbers find the most amazing things clogging the pipes. It’s not just what you’d expect either, like cotton swabs and baby wipes, but kid’s blocks and even shoes have been found, too. A clogged and overflowing toilet is a homeowner’s (or anyone’s, to be honest) worst plumbing nightmare, and one that might cost big bucks to have a plumber come fix it ASAP.

How Does the Water in Mission Viejo Affect Your Plumbing?

The water flowing into your home affects your plumbing more than you might think. Have you ever heard water referred to as hard or soft, and wondered exactly what that means? Isn’t water just wet?

Actually. no. Rainwater is naturally soft when it falls from the sky since it’s just hydrogen and oxygen, and is really not great for drinking as it has a salty taste. As water makes its way into the ground and eventually into waterways, it picks up an assortment of ground minerals along the way. These minerals are primarily calcium (in the form of chalk and limestone) and magnesium, and are essential to human development and health. When water has these minerals, it’s classified as hard. One way you can tell if your house has hard or soft water is when you’re in the shower. If the water is soft, it feels like you can’t get the shampoo out of your hair. If you can’t get a good lather and your hair feels sticky after you rinse, you’ve got hard water.

The water in Mission Viejo is naturally hard. It’s perfectly safe for household use, including drinking, but it does leave a chalky residue behind. Since the water in Orange County comes from three sources and then blended, it’s hard to know when those pesky white spots will show up on your glassware and your faucets.

How Hard Water Affects Your House

The calcium and magnesium in the local water dissolve in your water heater tank, with the particles sinking to the bottom and leaving a layer of sediment that accumulates over time and eventually makes it harder for the water heater to work properly. The heating elements have to work harder, costing more in electricity or gas usage. The sediment can also cause corrosion or rust in the tank, which is then more likely to leak. Hard water also makes it tough to get soap scum out of the shower, tub, and sink. What’s worse, hard water prevents your whites from getting bright and staying white in the wash. Your gray tees are a result of hard water, not water temperature.

As hard water rolls through the city into the house, it’s leaving that same scaly deposit in your pipes. The minerals don’t dissolve; they just build up in the pipes when you turn off the tap and then the water in the pipes evaporates.

Sometimes you turn on the tap and the water comes out cloudy. This is usually nothing more than an air bubble in the pipe that releases when the tap opens. The cold water in the pipes contains more air than hot water (this never happens with the hot tap), and tiny bubbles form in the depressurized water, making it look milky or cloudy. If you’re worried that there’s a problem with your pipes, set a glass of cloudy water on the counter and wait a couple of minutes. If the water clears up, it’s fine. If not, there’s a problem with either the pipes or the water itself, and you should call the City and report the problem.

How Much Does Plumbing Usually Cost in Mission Viejo?

When you get an estimate from our plumbers, notice we don’t charge an hourly rate. Rather, we estimate the cost in terms of parts and labor. This is because sometimes it’s almost impossible to diagnose the problem without getting deep into the pipes, and we have no way of knowing how long it will take to complete your project.

Is your plumbing project confined to the house or is the problem further down the pipes, out in the yard, or inside the walls? As gross as it is to unclog a toilet, for our plumbers it’s a fairly simple procedure that can be done right on the spot. If they can’t find the problem with a drain snake and have to use a remote camera to look way down the line, that’s a much more involved process that increases the cost. Why? Because you’re looking at clogged sewer lines, pipe replacement, and the possibility of digging trenches to finish the work. Since houses in Mission Viejo and most of Southern California are built on a slab, our plumbers have to tunnel under the slab to reach the damage.

The exact location of the damage is the final factor in assessing the cost of a plumbing project. If a repair can be done without tunneling or breaking into drywall, it’s a lot cheaper than any project that involves a contractor to complete.

Can Better Plumbing Save You Money in Mission Viejo?

Better plumbing can always save you money in the long run. Newer appliances are more energy-efficient, and as a bonus, generally have a smaller carbon footprint. Before you go shopping, keep in mind where you’ll get the most for your money.

The general idea for all these is the same, but the technologies and costs differ. Consult with our plumbers and do your research to determine which is best for your home.

When Should You Call the Water Utility Company in Mission Viejo Vs Hire a Plumber?

While it’s true that the city of Mission Viejo is responsible for maintaining main water and sewer lines, you will have to call in a plumber to determine where the problem originates. If the blockage is between your house and the city connection, it’s your responsibility to have the pipes repaired or replaced. If the damage is beyond that connection, towards the street, it’s up to the city to maintain the pipes.

When Do You Need Permits for Plumbing Service in Mission Viejo?

Any time you are adding or dramatically changing a water source, such as a pool, bathroom, laundry, or kitchen, you’ll need to let the City of Mission Viejo know and have the work permitted. Your plumber or contractor can take care of this for you. Some water projects are unique to Southern California and may require a permit, like installing a gray water or reclaimed water system. Our plumbers also install gas lines, so if you are replacing any appliances with gas models, you’ll need a permit.

Recent Requests We Received From Customers In Mission Viejo, CA

I want a tankless 110 volt 15 amp water heater installed under a bathroom sink. There is electricity in the area but not under the sink.

Looking to replace a bathtub but also need some plumbing inspection done due to water not draining in the current tub.

Check possible link in water line from water meter at street to house shut off valve.