Looking for an affordable plumber in Newport Beach, CA? Great! Mr. Blue Plumbing is at your service 24/7. 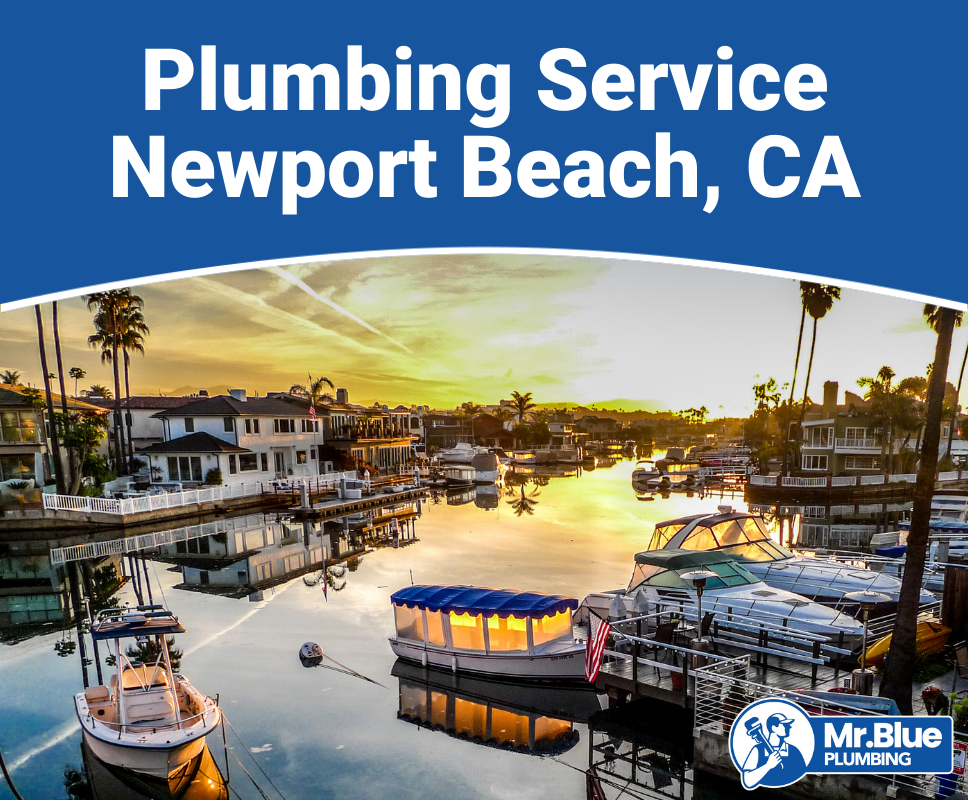 Tell us about your plumbing issue in the form and we'll get you connected with a Mr. Blue Plumbing expert in Newport Beach today!

What Are the Most Common Plumbing Issues in Newport Beach?

Plumbing issues are part of homeownership, no matter where you live. The majority of the issues we come across in Newport Beach are pretty similar to other cities. The most common ones include:

Pipe leaks are more prevalent in older houses, though we also have few cases in newer homes. Pipes can leak due to several causes. Continuous high water pressure can loosen joints over time, resulting in leaking. Trees that are too close to the houses also pose a threat to the plumbing system. As the roots spread out in search of water and nutrients, they push against the water and sewer lines, thereby loosening the joints.

Sometimes, the leaks are caused by corrosion in the pipes, which results in the formation of pinholes. Older pipes that are due for replacement may also leak from wear and tear.

While some leaks are pretty obvious, like finding a water puddle in the yard or a leaky slab, others go unnoticed. We often advise our customers to keep tabs on their water bills and ensure they investigate any abnormal surges. Doing so can help arrest hidden leaks early enough, before they cause structural damage to the home.

Leaking faucets, heaters, toilets, and showerheads are also pretty common. Dripping fixtures can be caused by worn-out faucet washers and toilet flappers, ill-fitted parts, corrosion, etc. Once we establish the problem, we either repair the broken part or replace it, depending on the extent of the damage.

Calls over clogged drains range from blocked kitchen sinks, bathroom drains, and sometimes, clogged toilets. Though some homeowners are quick to fix drain clogs with over-the-counter unblocking products, we often discourage this as the chemicals are too harsh on the pipes.

Water heater issues are pretty common in Newport Beach homes. Customers sometimes complain about the heater making strange noises; others call over discolored water coming out of their units, while most cases involve heating inefficiencies. Often, most of these issues require a quick fix, but in the case of old heaters, especially those that have been in use for more than eight years, we often recommend a replacement.

How Does the Water in Newport Beach Affect Your Plumbing?

Newport Beach gets its water from four primary sources. These sources are the Orange County Basin, Big Canyon Reservoir, 16th Street Reservoir, and Spyglass Hill Reservoir. Like the rest of California, our water is usually hard. According to the U.S. Geological Survey, water is considered hard if it contains more than 60 mg/L, which is a measure of calcium carbonate in milligrams per liter of water. There are different variations of hardness, with over 180 mg/L being considered very hard. Newport Beach water measures 240 mg/L, which makes it very hard.

Essentially, hardness in water signifies a high concentration of minerals, in this case, magnesium and calcium. While consuming mineral-rich water is good for your health, the same can’t be said about the plumbing systems. The minerals damage the systems in more ways than you can imagine.

Corrosion in Pipes and Fixtures

As the water passes through the plumbing system, mineral deposits accumulate on the pipes and fixtures’ surfaces. These eat into the metals over time, resulting in pinholes and eventual leaking.

The layer of mineral deposits is often referred to as limescale. As the layer thickens, pipes narrow, and the water pressure decreases. When the water in the supply line has too much pressure, the narrowed pipes can burst due to pressure buildup. Where the pipes are sturdy enough to withstand the force, the joints usually snap to let out the pressure.

Limescale also builds up in water heaters, forming a sort of insulation. This reduces heating efficiency as the heater takes longer to heat through the limescale layer and warm the water. If you have noticed clogging on your showerheads, it could also be due to limescale buildup on the nozzles.

As much as our water passes the federal safety standards, the Environmental Working Group observes that the water is not 100% safe. It contains treatment byproducts, which besides being harmful to some people, especially those with special conditions, damage the plumbing system. For instance, chloramine, which helps keep the water disinfected as it moves through the pipes, disintegrates rubber linings on the plumbing lines over time. There are several other contaminants that harm the water pipes in different ways.

How Much Does Plumbing Usually Cost in Newport Beach?

The cost of hiring a plumber in Newport Beach varies depending on several factors. For instance, we evaluate the project complexity to determine the expertise required and how much time we are likely to spend on the job. We also factor in the materials needed to get the overall cost of the project.

If you’re new in Newport Beach, you will realize that plumbing costs are slightly higher than in other low-cost states. This is primarily due to the high cost of materials and the generally higher living standards, which impact labor costs.

Generally, plumber charges range between $250 and $500, with an average cost of about $375. This is slightly higher than the national average, which is around $364, according to Home Advisor estimates. Overall, you should expect to spend anywhere from a few hundred dollars to several thousands of dollars, depending on the nature of the project.

Besides plumber charges, materials are the main cost factor in plumbing services in Newport Beach. Homeowners have the option of using either copper or plastic pipes. Both options have pros and cons, but the cost outlay for copper pipes is usually multiple times higher than, say, PEX pipes. Some people also prefer high-end fixtures over standard ones. Hence, the cost may vary from one person to another, depending on the materials they choose.

We usually charge standard hourly rates, but the cost may vary depending on the task at hand. For instance, you could pay more for repairing a toilet, even if it takes the same time with, say, unclogging a drain. In most cases, we consider the expertise required for a specific task and then quote in line with that. For lighter jobs such as fixing a faucet, repairing a sink, etc., we often quote a flat rate and reserve hourly-based quotes for bigger projects.

Overall, a plumbing project will cost based on its complexity. Complex tasks that require the expertise of master plumbers are sure to cost more than general ones. For instance, installing pipes within a building, like below the foundation, is more complex than an open yard. Therefore, you should expect to pay more in the case of the former.

Can Better Plumbing Save You Money in Newport Beach?

Despite the high costs that come with better plumbing, it can still save you money in the following ways:

Adopting a smart plumbing layout is both a short and long-term money-saving strategy. For instance, constructing areas that need plumbing close together allows sharing of water supply and drain lines, thereby cutting down on material costs. If you have a multistory building, you can situate downstairs bathrooms below the upstairs ones. Similarly, if you design an outdoor kitchen near the indoor unit, both can share the supply and drain lines.

As much as the conventional water heaters have the added advantage of storage, on-demand heaters, commonly known as tankless heaters, are highly cost-efficient. To begin with, the heaters do not store water. Water is heated as it passes through the heater on a demand basis. This reduces water heating costs drastically as the heater doesn’t have to keep heating the whole tank, which in most cases is not used at a go.

Again, on-demand heaters have lesser mechanical issues compared to the tank-type models. As such, the former has a longer lifespan (20 years) than the latter. Upgrading your conventional heater ends up cutting down your replacement costs by half, in addition to the saved repair costs.

In 1994, the federal government enacted the Energy Policy Act that requires plumbing products to meet water-efficiency standards. Toilets sold in the United States must not exceed 1.6 water gallons per flush. Kitchen and bathroom faucets per minute usage should not exceed 2.2 gallons, while showerheads must keep the usage below 2.5 gallons per minute.

This is quite an improvement of the traditional models, which helps reduce water usage by more than a half. Further, WaterSense, an EPA program, encourages manufacturers to produce superior water-saving products in exchange for certification. WaterSense-certified products must exceed the federal requirement by at least 20%.

This means that installing WaterSense labeled products, such as showerheads, faucets, toilets, etc., can further reduce your water usage by a further 30%. For instance, according to the Environmental Protection Agency (EPA), installing a WaterSense faucet can save the average family almost 11,000 water gallons over the fixture’s lifetime.

When Should You Call the Water Utility Company in Newport Beach Vs Hire a Plumber?

There’s nothing as stressful as having a dry tap or water bill that keeps escalating, even when your water usage has been relatively constant. In such times, you may get confused about whom you ought to call between the water utility company and the plumber. Though most water utility services (City’s Water System Services, MesaWater District, etc.) are pretty responsive, knowing whom to call and when can help avoid placing futile calls.

When Do You Need Permits for Plumbing Service in Newport Beach?

The city of Newport Beach requires you to obtain a permit before hiring a plumber for significant plumbing work. This includes plumbing installation, remodeling, repiping, plus significant replacements and repairs that involve rearranging the original system. For instance, if you’re moving the water heater from one location to another, you need a permit. The city will need to conduct a fresh inspection to ensure the new location doesn’t compromise your safety. However, minor repairs and replacements, such as repairing the water heater, changing a broken toilet, replacing switches, etc., do not require a permit.

Recent Requests We Received From Customers In Newport Beach, CA