Looking for an affordable plumber in Redondo Beach, CA? Great! Mr. Blue Plumbing is at your service 24/7. 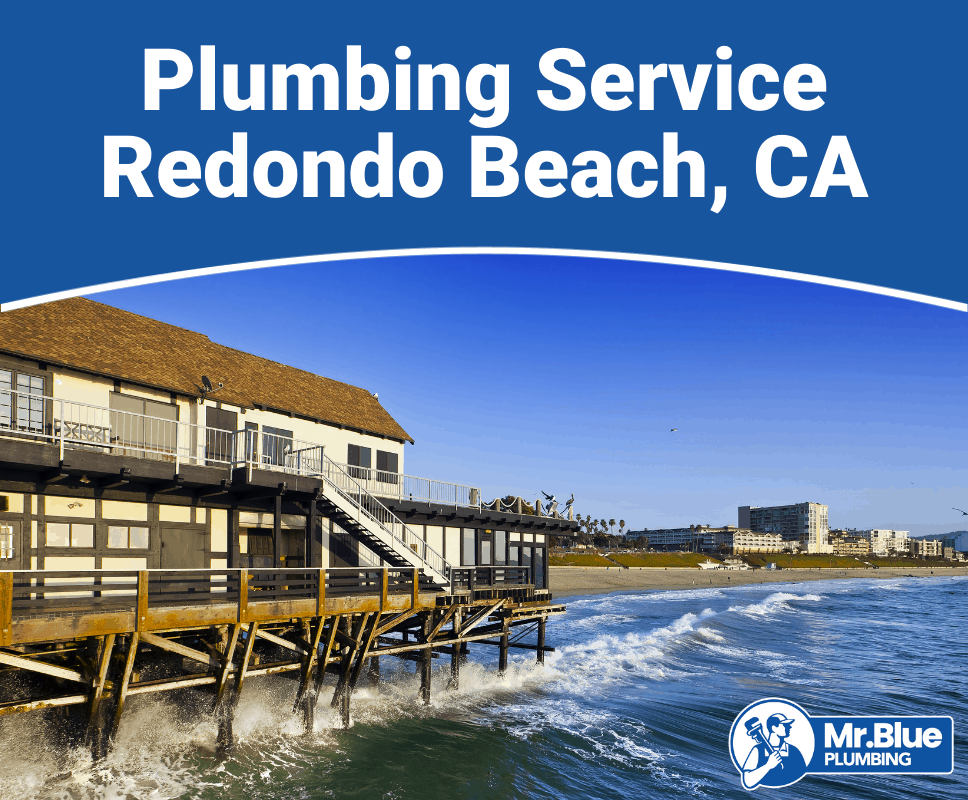 Tell us about your plumbing issue in the form and we'll get you connected with a Mr. Blue Plumbing expert in today!

What Are the Most Common Plumbing Issues in Redondo Beach?

Situated right on the Pacific Coast, about twenty miles from downtown Los Angeles, Redondo Beach has long been a tourist destination, and it is also one of the most sought-after areas to live across the country. Living in California, right on the ocean, does come with some problems that can wreak havoc on plumbing.

Regardless of where your home is or what natural disasters are more common, some plumbing issues are found everywhere. These can include clogged drains, leaking faucets and pipes, updates to fixtures in your kitchen or bathroom, and problems with water heaters or ice makers. Additionally, because the water in the area is harder, low water pressure can be a problem, particularly if your water is not treated with a water softener.

How Does the Water in Redondo Beach Affect Your Plumbing?

Redondo Beach is located in the Rancho Dominguez water district and uses a combination of local groundwater as well as surface water that is purchased from the Metropolitan Water District of Southern California. This water comes from the Colorado River and the State Water Project in Northern California. According to testing done by California Water Services, the groundwater is very hard and the surface water is moderately hard. Hard water has higher levels of calcium and magnesium, which allow mineral deposits to form in your pipes, resulting in low water pressure.

How Much Does Plumbing Usually Cost in Redondo Beach?

Plumbing repairs can be costly, especially if problems are not fixed as soon as they are discovered. On average, plumbing costs in Redondo Beach are between $109.00 and $795.00. Generally, these costs do not include inspection costs or permit fees. Sales tax on materials is often not included either. Additionally, if you require new installations or repairs to the sewer system, those costs are often much higher. For example, repair to a sewer system can cost over $2,000.00. The cost of a plumbing repair job is also influenced by a few other factors.

Extent or Severity of Problem

The more extensive and severe a problem is, the higher the cost to fix it will be. If you attempt to repair the plumbing yourself, get overwhelmed, and possibly even cause more problems, it can get even higher. Additionally, if the plumbing system in your home is in poor condition, costs can increase quickly as more problems are discovered during the project. A simple leaky faucet repair could expose problems that are more costly, such as damaged pipes and mold.

PVC plumbing is definitely the cheaper option for pipes, and it is usually the most commonly used. If you find that for some reason you need copper, stainless steel, or ABS pipes, or you just prefer these types of pipes, your costs will increase. Other factors that influence the cost of materials include sales tax, which is currently 9.5%. For many larger installation projects, our plumbers may use a fixed rate that accounts for the cost of materials.

Some repairs will be priced using a fixed rate. These projects generally include projects such as bathtub installation. Our plumbers prefer to use an hourly rate to account for longer jobs or unforeseen issues. A fixed rate may be used by our plumbers for larger jobs or those that are straightforward and don’t come with the potential for unexpected problems.

Can Better Plumbing Save You Money in Redondo Beach?

Absolutely. Even though a lot of plumbing projects can have a high initial cost, these projects will generally end up saving you money in the long run. By addressing problems as soon as they happen and preventing more expensive, future repairs, not only do you save money, but you can also save money on your utility bill. While a dripping faucet may not seem like a big deal, it can end up costing up to around $200 a year. That might not seem like a huge amount, but it adds up over time. It also wastes more water than you might think, amounting to over 3,600 gallons a year. When you think about the fact that only 1% of water on the planet is suitable for human consumption, it starts to seem like pouring money down the drain. There are a few other ways that better plumbing can save you money.

When Should You Call the Water Utility Company in Redondo Beach Vs Hire a Plumber?

In most cases, the majority of your plumbing problems can be managed by our plumbers, however, there are some instances where the utility company needs to be called. Sometimes it is an issue of legality, something where only the utility company can step in.

If you are not really sure if you should call a plumber or the utility company, our experts can always come and check out the problem and let you know if it is something the utility company needs to handle. You can also keep reading for some common issues where it might not be clear who to call.

If your house seems to not have water, in most cases, this is likely an issue with the city water supply, which means you need to call your utility company. Before you call the utility company, though, check with your neighbors first. If none of your neighbors are having problems with their water supply, it is likely a problem specific to your home, and it is better to call us instead.

According to the California Water Service, responsibility for water leaks is determined by where the leak is. For example, a broken water main is the responsibility of the utility company, but leaks on your property are yours. Additionally, a call to our plumbers is a good first one to make if you suspect the problem is a break in your water line and you do not know where the shut-off valve is or it does not work. However, depending on where the break is, you may ultimately need to contact your utility company.

When Do You Need Permits for Plumbing Service in Redondo Beach?

It can be tempting to attempt plumbing repair without a plumber, just to save money and prove your plumbing chops. However, what you may not realize is that many plumbing jobs can become complicated and overwhelming quickly, even if it seems like it could be a DIY project. Plus, you might need a permit from the city. In most cases, if you are simply fixing or maintaining an existing appliance or parts that are already in place, you do not need a permit. Additionally, if you are replacing plumbing parts (like a toilet seat) that do not require water, you do not need a permit. Here are some situations where the City of Redondo Beach does require a permit:

For projects that require you to obtain a permit from the city, it is probably best to call our plumbers. Our experts already know which permits are needed and can easily obtain them from the city, if necessary.

Recent Requests We Received From Customers In Redondo Beach, CA

Remove a steamer under a bathroom sink, cap off the plumbing lines to the steamer and install a new drain in the sink which I already have.

My toilet water runs without stopping

RO system for whole house? Family of 4 and 3 baths We have fish so need the water to be safe for them

We are wondering about an osmosis system in our three-bedroom condo? Water stacks run vertically up and down the four condo floors