Looking for an affordable plumber in Salinas, CA? Great! Mr. Blue Plumbing is at your service 24/7. 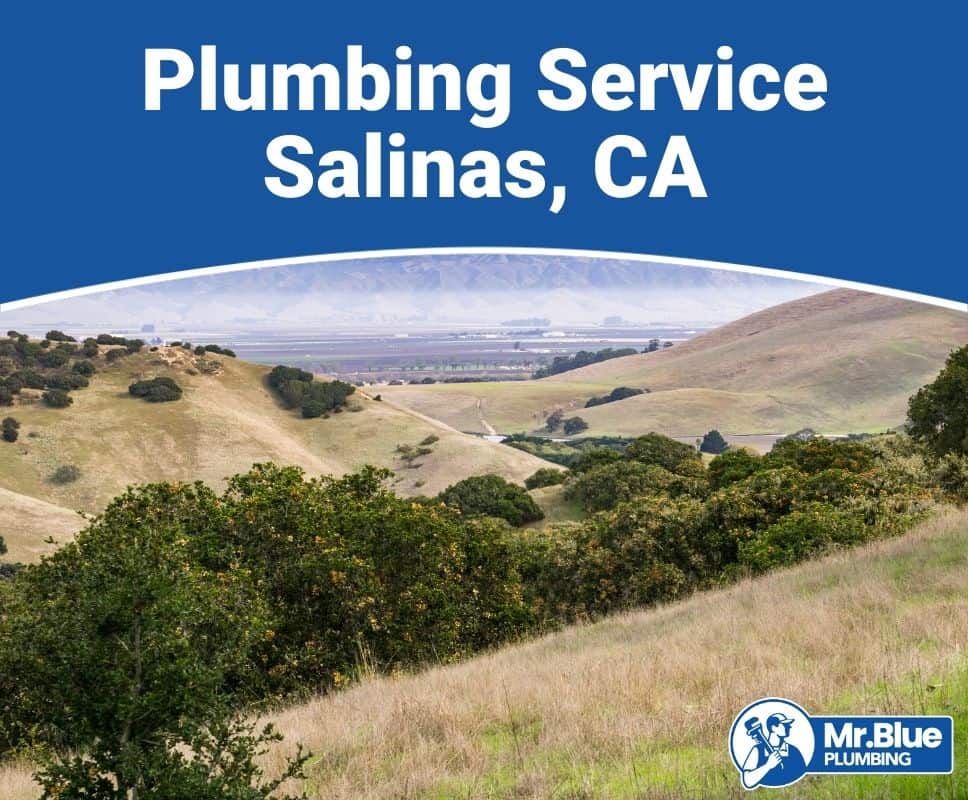 Tell us about your plumbing issue in the form and we'll get you connected with a Mr. Blue Plumbing expert in Salinas today!

What Are the Most Common Plumbing Issues in Salinas?

Plumbing issues in Salinas City range from leaks to fixture malfunctions and drain problems. Below are five of the most common issues we see:

Leaking faucets are one of the leading plumbing issues in Salinas homes. Based on the several repairs we have done, worn-out washers or O-rings and corrosion are the most common causes of faucet problems.

As much as drippy faucets are irritating, we have realized that most homeowners tend to ignore the problems for too long. Eventually, the excessive moisture causes structural damage to the plumbing system, shortening the fixtures’ life, calling for early replacement.

Clogged drains are also common in Salinas homes, both in the bathroom and the kitchen. Accumulation of foreign deposits that get trapped inside the drain pipes mainly clogs the drains.

Most cases require minor interventions such as using suction or unscrewing the pipes to remove the dirt. However, in extreme cases involving whole house drain clogging, which is relatively rare, we are forced to look into the sewer line to rectify the problem.

Water heater issues vary from one home to another, depending on the type of heater in use. While on-demand heaters do malfunction from time to time, most of the problems we have handled in Salinas involve conventional heaters. The issues range from corrosion and subsequent leaking to broken parts such as pressure valves, worn-out washers, temperature issues, and loose connections.

Most toilet issues involve leaks, though it’s not uncommon to get call-outs for unblocking tasks. Running toilets often result from faulty flappers and floating balls, which, in most cases, go unnoticed. However, the leaks lead to massive water wastage, with an average faulty toilet potentially leaking 22 water gallons per day .

Leaky pipes are another common plumbing challenge in Salinas homes, especially the relatively older houses. Like drippy faucets, leaky pipes cause immense damage to structures, though at a larger scale. For instance, underground pipes often lead to foundation damage, while leaky slabs lead to mold growth and increased humidity inside the house. In addition, when pool leaks are ignored, they often cause the interior structure to disintegrate, thereby calling for major repairs.

Pipes may leak from several causes. In older Salinas homes with copper pipes, the main culprit is usually corrosion. Excessive water pressure and tree root invasion also cause joints to loosen and leak. Though rare, the pipes crack in extreme cases, giving way to debris and tree roots to infiltrate the lines, blocking the water flow.

How Does the Water in Salinas Affect Your Plumbing?

In Salinas City, we usually utilize underground and surface water. Our primary water sources include the Salinas River and Gabilan Mountains . Water from the Salinas River percolates underground into aquifers, which supply mainly the agricultural regions of the city. Four creeks flow from the Gabilan Mountains: Santa Rita, Natividad, Gabilan, and Alisal creeks. Lake Carr is also part of our water supply system, whereby Natividad, Alisal, and Gabilan creeks flow.

Apart from treating the water with disinfectants, the City of Salinas does not soften it before supplying it to the residents. Both the surface and underground water is hard, with a measured hardness level of 314 mg/L.

Usually, water hardness depends on the amount of calcium and magnesium present, with a high rating signifying higher concentration and vice versa. Mg/L stands for milligrams of calcium carbonate per liter of water. The U.S Geological Survey (USGS) classifies water hardness as follows:

Hard water is healthy for consumption, as the body requires the minerals present for proper functioning. However, the chemicals cause a range of problems to the plumbing systems, including clogging and corrosion.

When hard water flows through the plumbing system, chemicals stick to the surfaces and cause a buildup over time. This buildup, commonly known as limescale, clogs pipes and other plumbing fixtures such as showerhead nozzles, reducing water pressure.

Drain pipes also block due to the accumulation of soap scum. This occurs mainly in homes without a water softening solution. Usually, hard water reduces the efficiency of detergents, which calls for extra application to achieve the desired lathering. Consequently, the detergents react with the soaps forming a thick layer of soap scum. As the soap scum accumulates in the drain pipes, it traps other foreign deposits such as hair and food particles, leading to pipe blockage.

Limescale buildup inside water heaters also causes problems. The most common of them is heating inefficiency, whereby the layers of lime act as insulation, which causes the heater to consume extra energy to heat the water.

As the chemicals build up inside the pipes and other plumbing fixtures, they wear out the metals, causing them to develop pinholes, which leak water.

According to the Environmental Working Group (EWG), Salinas City water has 30 contaminants , including arsenic, nitrate, and chromium. Some of them lead to health problems such as gastrointestinal illnesses and neurological disorders. These contaminants also cause issues in plumbing systems, including disintegrating and corroding the rubber and metal parts.

How Much Does Plumbing Usually Cost in Salinas?

The cost of hiring a plumber in Salinas City depends on the project type, labor costs, and materials needed. Though the price may also vary in different neighborhoods, this is primarily due to the plumbing materials preferred in the area, which then dictates the expertise required to handle them. The average plumbing bill in Salinas is $475, where costs range from $115 to $835.

One of the main factors we consider before quoting a customer is the project type. While we charge hourly rates on most projects, the ultimate cost may vary even if the projects take the same time to complete. We also give standard quotes for smaller projects such as unclogging a drain or fixing a showerhead.

For instance, drain unclogging costs about $200 on average, while drain line inspection costs around $400. A bigger installation project such as bathtub installation can cost you around $3000 while installing a water softener averages $1700.

Most plumbers in Salinas City, including us, charge hourly rates. We also offer hourly rates though this depends on the experience of the plumber. If a job requires the expertise of a master plumber, we give a higher quote, while those requiring journeyman plumber experience carries lower rates.

Material costs are a significant cost determinant in every plumbing job. If you prefer high-end materials, you should expect to pay more. Some plumbing options such as using copper pipes instead of plastic ones would also lead to a higher spend. That said, installations are often cost-intensive compared to reworks. Repairs usually cost much cheaper since you only need to replace the broken or faulty parts.

Can Better Plumbing Save You Money in Salinas?

Better plumbing, in most cases, involves hefty spending in materials and labor, but it can save you money in the long run. For instance, hiring one of our Salinas master plumbers will often cost you more than settling for a journeyman plumber, but it guarantees you better plumbing due to the quality service you stand to receive. All the same, below are smart ways you can save through better plumbing.

For close to three decades, the federal government regulates the standard of fixtures being installed, a move that has saved the taxpayers billions of dollars. To further help consumers save more water and lower their utility bills, the United States Environmental Protection Agency (EPA) introduced a program known as WaterSense , which certifies water-efficient fixtures.

For products to earn WaterSense certification, they must be at least 20% more water-efficient than the federal standards. Though installing the fixtures (toilets, showerheads, faucets, etc.) may be expensive initially, it can lead to massive water savings over the fixtures’ lifetime.

Replacing your conventional water heater can save you money in various ways. For example, on-demand heaters have a longer lifespan, usually more than 20 years, unlike tank-type heaters, which should be replaced every ten years.

While high water pressure helps avoid contamination, the recommended levels being between 60-70 psi (pounds per square inch), any pressure above 20 psi is considered safe. Installing pressure-reducing valves to minimize it from the standard 60-70 levels to about 35-40 psi can drastically reduce your water consumption without putting your family at risk.

When Should You Call the Water Utility Company in Salinas vs Hire a Plumber?

Some water issues, such as low pressure, can throw you off and leave you at crossroads, not knowing whom to call – the water utility company or us, your plumber. Below are a few distinctions of when a call to either of us is appropriate.

When Do You Need Permits for Plumbing Service in Salinas?

Salinas City requires you to obtain a permit before hiring a plumber for major plumbing work. This includes installations, remodeling, plus replacements, and repairs requiring structural changes . Replacing appliances such as a water heater also requires a new permit. However, minor repairs and replacements such as fixing a broken toilet or replacing a sink do not require a permit.

Recent Requests We Received From Customers In Salinas, CA

To replace my kitchen sink to stainless n the hood over the oven.

my bathroom hot water sink faucet has no water coming out of it.

Low water pressure in front and back yard . Spigot in back yard leaking.

my bathroom hot water sink faucet has no water coming out of it.

To replace my kitchen sink to stainless n the hood over the oven.