Looking for an affordable plumber in San Ramon, CA? Great! Mr. Blue Plumbing is at your service 24/7. 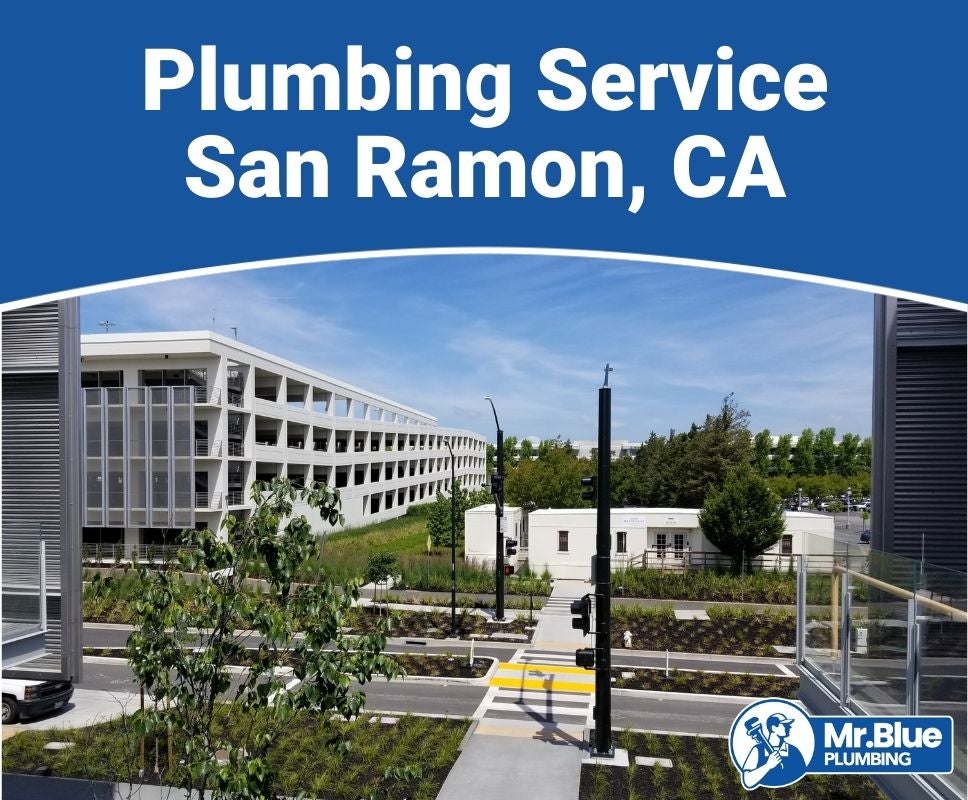 Tell us about your plumbing issue in the form and we'll get you connected with a Mr. Blue Plumbing expert in San Ramon today!

What Are the Most Common Plumbing Issues in San Ramon?

What kind of plumbing issues might the typical homeowner in San Ramon face? They are generally going to see a lot of the same problems as those living anywhere. Common issues clogged toilets, leaking pipes, and the occasional water heater or water pressure issue.

Each requires a unique approach to solving the problem, but can be handled when the work is given to a professional plumber who knows what they are doing.

Take the issue of a lack of water pressure, for example. It might seem like a small inconvenience at first, but it doesn’t take long before every appliance in the house is no longer working properly. In the typical residential home, you are going to want to aim for a water pressure between 30 and 70 psi. Most people feel pretty comfortable when the pressure is around 60-70 psi, but pressure above 80 psi violates building codes. There is no excuse for having something done against code, but there is also no reason why you shouldn’t be able to enjoy your morning shower to the maximum.

A constantly running toilet is another issue that many residents have reported in the past. What they say is that it is not only an annoyance to them, but it also runs up their water utility bills for no reason. The likely culprit here is a part of the toilet known as the fill tube. This is an essential component of the toilet that can easily malfunction. Trained plumbers, like us, will know exactly what to look for and can likely repair this issue in just a matter of minutes to perhaps an hour. It’s something we’ve dealt with in the past.

How Does the Water in San Ramon Affect Your Plumbing?

Water quality and conditions in any city play a role in the plumbing. Most of us are highly familiar with the major failure of the water system in the city of Flint, Michigan. It was a cautionary tale that plays out in all too many cities throughout the United States. It was a tragedy that so many people found themselves without adequate drinking water or water that was usable for anything at all.

Fortunately, there are reports actively put out by the local government in the city of San Ramon and in surrounding areas that can best detail water quality throughout the year. Local officials are happy to report that the water they provide to residents is second to none, and its high quality helps the city avoid any nasty issues that could impact the plumbing system.

The story of Flint, Michigan was a wake-up call for local governments across the country. No other city wants to have to go through that, and that is why city officials are so careful to follow EPA guidelines for how the water should be. They always make sure that contaminants in the water are below the standards set by that federal agency.

With all this said, you still cannot assume that the plumbing will hold up forever. The piping will possible decrease in value over time, simply because of the impact of the water flowing through it. The city is doing everything in its power to keep the water safe and flowing.

How Much Does Plumbing Usually Cost in San Ramon?

There are several variables that could dictate the price:

There is nothing that determines the cost of a plumbing job in San Ramon more than the type of work performed. Nobody puts in the same kind of work regardless of the project that you are working on. What matters is the kind of work we have to do and how long we think that work might take. Thus, the necessary job is going to weigh into the cost. For example, the average cost of fixing a constantly running toilet is likely to be fairly low at just $50-$100, but a full-scale bathtub installation could easily run over $2,000.

The Permit Center for the city of San Ramon issues all permits for any required plumbing work that is to be performed within city limits. They want to ensure that they know what kind of person will be working on the plumbing and what type of work they intend to perform. The point of this being that the city does not want to have unlicensed individuals working on the plumbing system when it could endanger an entire population of people within the city. They need to know what is going on before it ever happens.

The total amount of labor put into the project will show up on the final bill. Most plumbers opt to charge by the hour, and this makes it easier for us to give a precise quote on how much it is likely to cost to complete the job. That said, there are some situations in which the service may charge a flat rate for the work performed. We recommend that you ask about this before allowing us to begin the work. You will want to have a firm estimate in hand before you sign off on the work.

Can Better Plumbing Save You Money in San Ramon?

There are a lot of ways that better plumbing can save you money in San Ramon. You don’t have to look far to see how an issue with a leaky pipe or some similar problem can prove extremely costly on your final invoice. You see, all of that running water adds to your water bill, and at the end of the day, that usually comes out to a lot more than if you had just paid a plumber to come out and take care of the problem for you in the first place. It is not the most appealing thing in the world to say that paying up now for plumbing will save you in the long run, but it is the truth.

The federal government also encourages people to use the most energy efficient appliances and plumbing fixtures through a combination of financing help as well as rebates and other incentives. They want people to use the best plumbing systems possible so they can consume less water and keep as much as they can available for other people who need them as well. It is a system of give and take that helps both the consumer and the federal government’s goals at the same time.

When Should You Call the Water Utility Company in San Ramon Vs Hire a Plumber?

Whenever there is a plumbing problem in your home or nearby, you should try to get in touch with both the water utility company and a quality plumber as quickly as possible. You probably will want to know which one to call first, but that depends on the nature of the problem.

The utility company does not need to know about a constantly running toilet. This is a quick and easy fix that impacts only you. If you can’t do it yourself, call us for help. After, you may choose to call the utility company to see if you can get some of your money back on your utility bills for the time that the toilet was running.

The other scenario would be if you have a major plumbing problem that extends beyond just your residence. If you find that your plumbing issue is flooding the neighbor’s property or causing additional issues that are beyond a simple fix, then the utility company must be contacted immediately. They need to know when such a problem rears its head because they need to inform others of the potential risks and give them tips on what they need to do to keep themselves safe. Aside from that, they need to know that a licensed individual is working on the problem right away.

When Do You Need Permits for Plumbing Service in San Ramon?

You are not going to get away with doing plumbing work without a permit in San Ramon. The penalty for doing this is far beyond any benefit that you might imagine you get by skipping out on permits. You should always make sure that permits are obtained before any work begins on your property. The only step that you may take on this project before getting the permits is to get an estimate from plumbing service providers like us. We will be able to provide you with a reasonable estimate before getting the permits, but that is the only part of the process before permits are in hand.

The process for obtaining the official paperwork is very straightforward, and there is no reason why we can’t help you with this. If someone tells you that they are unable to make that happen, then there is something fishy going on, and you should look for someone else who can help you get it done. Unlicensed work or work without a permit is always going to be of lesser quality than work done by someone who is professional and has paperwork in hand.

Recent Requests We Received From Customers In San Ramon, CA

I can hear a gargling in our pipes. I would like to have our clean out serviced. We also have a leak behind our dishwasher.

We want to replace our existing 15-year-old water softener. Also need it installed once purchased. Thanks!

Need a quote to install whole house water softener and carbon filter. Thanks!

Installation of a water water softener.

Quote to install a water softener.