Looking for an affordable plumber in Santa Monica, CA? Great! Mr. Blue Plumbing is at your service 24/7. 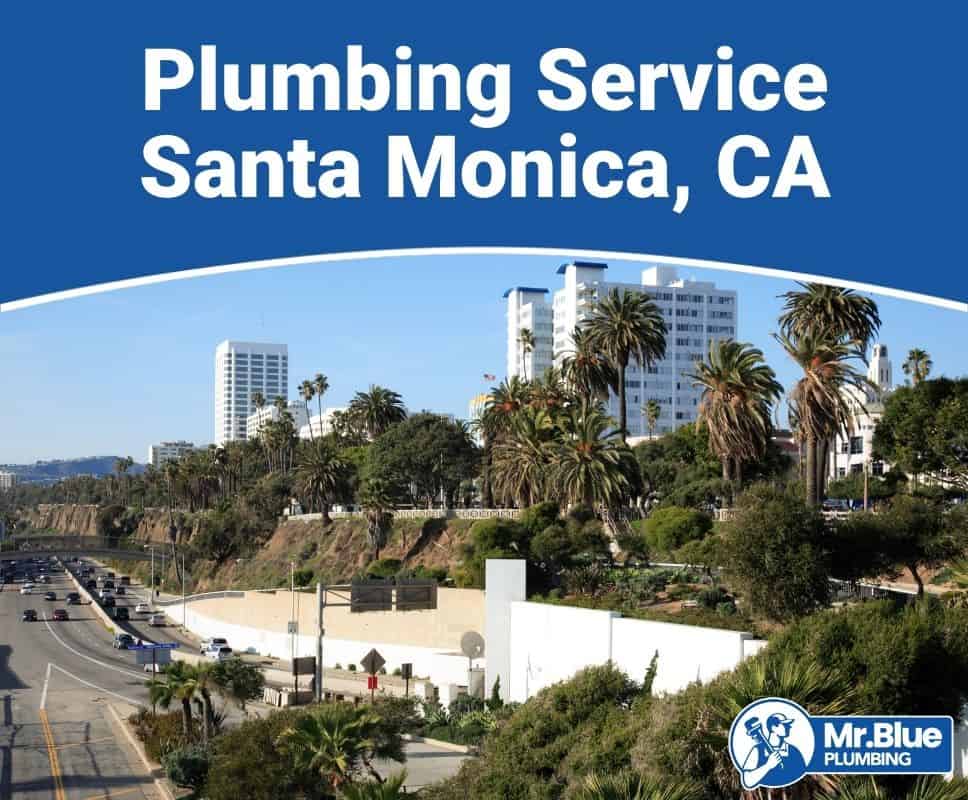 Tell us about your plumbing issue in the form and we'll get you connected with a Mr. Blue Plumbing expert in Santa Monica today!

What Are the Most Common Plumbing Issues in Santa Monica?

Many homes throughout the Santa Monica area experience clogged drains, and this issue is especially common along parts of the city’s west side. Characterized by unusual odors, bubbling sounds, or unexplained puddles, clogged drains result in slow, weak draining and can lead to backed-up sinks or tubs. Clogged drains are caused by a buildup of food, grease, soap, toothpaste, hair, and other substances. Although a single large item can clog a drain, it is far more common for small particles to build up over time. Clogged drains tend to get worse over time and do not usually start as emergencies, but they can eventually back up enough to flood your kitchen or bathroom if they are not taken care of within a reasonable amount of time.

Homes in Santa Monica and throughout Southern California are also prone to experiencing low water pressure. From having a hard time taking a shower after coming in from the beach to taking twice as long to fill a glass of water following a long afternoon in the hot sun, low water pressure can cause a variety of inconveniences for Santa Monica residents. This common problem is often connected to clogged drains, faucets, or pipes, but it can also be caused by running too many water appliances at once, a main water shutoff valve that is not fully open, or a problem with your pressure regulator. Low water pressure can also be a widespread issue that causes problems for many homes throughout your neighborhood, which will likely need to be handled by Santa Monica Public Works or another government organization.

Leaky faucets and showerheads are also common in the Santa Monica area. Leaky fixtures are often caused by broken O-rings, cartridges, or other parts within your pipes. High water pressure and problems with your balance between hot and cold water can also lead to leaky fixtures, which are typically characterized by a slow, steady drip.

Some homes in the Santa Monica area have pipes that are old enough to corrode, which can impact the appearance and taste of your drinking water. This is especially common among pipes that are more than ten years old and are made from iron and copper. Homeowners that notice this problem should run their water for at least a few seconds before using it. Although minor corrosion is generally not considered to be harmful, it can lead to leaking or broken pipes over time, as the condition of your pipes deteriorates if the problem is not taken care of.

Finally, tree roots can cause damage to underground pipes, which can lead to a variety of issues with your water and plumbing. Although not every tree root that grows against a pipe will automatically break it, trees can cause water pipes, sewer lines, and other types of plumbing to leak. Maple trees, which are common throughout Santa Monica, are a frequent culprit for this type of damage.

How Does the Water in Santa Monica Affect Your Plumbing?

The City of Santa Monica requires fluoride to be added to the city’s drinking water supply. Although added fluoride can have a positive effect on residents’ teeth, it can also cause unintended problems for plumbing. Fluoride can damage pipes when combined with chlorine, which is already added to drinking water in many areas. Although Santa Monica does not typically have high lead levels, especially compared to other parts of the country, the combination of fluoride and chlorine can cause small amounts of lead (that may otherwise be relatively harmless) to leach out of your pipes, soldered joints, and brass fittings, and infiltrate your water supply.

Chromium 6 and other certain contaminants have been found in Charnock Well Field in the past, which provides the majority of Santa Monica’s water supply. Although these contaminants are not usually considered harmful, we can install a reverse osmosis system or other water purification system in your home to further increase the quality of your water and keep contaminants from affecting your plumbing.

How Much Does Plumbing Usually Cost in Santa Monica?

Plumbing costs in Santa Monica typically fall between $121 and $880, with an average cost per project of around $500. These estimates cover our labor costs, materials, project costs, and cleanup fees. Permit and inspection fees are not included in these costs, as these fees are paid to the City of Santa Monica, instead of directly to us. Projects that involve new materials will generally require city and state sales taxes, and choosing a general contractor instead of an employee of a particular company may involve an additional fee.

Condition of Your Pipes

The overall condition of your pipes often contributes to the amount of work that is needed. Minor repairs, such as sealing a small leak, will cost less than a full overhaul of badly corroding pipes. Your pipes should be upgraded roughly every ten years to minimize the likelihood of plumbing emergencies and avoid needing the most costly repairs.

Many of us are available to make 24/7 emergency repairs, but these projects will cost more than routine maintenance and minor repairs. Monitoring your water and pipes and scheduling an appointment to have minor issues looked at as soon as you notice them can go a long way toward keeping them from becoming expensive and destructive situations.

Can Better Plumbing Save You Money in Santa Monica?

Skilled plumbers like us use high-quality, energy-efficient equipment that uses less water and is less likely to malfunction, which helps you lower your utility costs and helps you avoid having to prematurely purchase replacements. We also do a better job overall in Santa Monica, which means that projects that may cost more upfront are likely to last longer and save you money in the long run.

When Should You Call the Water Utility Company in Santa Monica Vs Hire a Plumber?

Although contacting us is a must in an emergency and may be your first thought if you experience any type of water issue, it is important to understand that not all water problems come from within your home. Widespread water issues are more likely to be a problem with your utility company than a problem with the plumbing in your home. Santa Monica Public Works is likely to be better equipped to deal with certain types of problems than a plumbing company.

In general, your water utility company handles issues that occur on their side of your water meter, while we handle issues that occur on your property. It is important to do your best to identify where a problem is coming from before making a call, we will be able to offer little or no assistance with city issues. Plus, your water utility company may charge fees to residents who ask for help with problems that are not city issues.

Checking with your neighbors to see if they are also experiencing low water pressure, dirty water, or other water issues can help you pinpoint whether a problem is likely to be widespread or confined to your property, which can help you determine whether to call Santa Monica Public Works or one of the city’s many plumbing companies. Taking other steps to figure out where a problem is coming from before making a call, such as turning off all your water sources and checking your meter, can also help you avoid extra fees that may come from calling your water utility company for help instead of us.

When Do You Need Permits for Plumbing Service in Santa Monica?

Like construction projects, certain types of plumbing projects involve city resources and may require permission from the City of Santa Monica before getting started. Although this policy generally does not apply to emergency repair situations, large remodeling projects that involve replacing or adding pipes or equipment related to plumbing may affect your use of city water and require a permit, especially if you are doing the work yourself.

In Santa Monica, most home improvement projects that involve plumbing fall under the guidelines for a Single Trade Permit (STP), which is the most basic building permit used in the city. This type of permit includes projects such as sink replacements, repiping within your home, and water heater replacements as well as a wide variety of project categories that are not related to plumbing. More complex projects that utilize more than one of these categories typically require a Combination Permit, rather than multiple Single Trade Permits.

Application materials and fee information related to these permits can be found on the City of Santa Monica website. Residents can also stop by the city’s public counter for assistance with any questions before getting started.

Recent Requests We Received From Customers In Santa Monica, CA

Bathtub installation with proper support/cradle and removal of old tub.