Looking for an affordable plumber in Cape Coral, FL? Great! Mr. Blue Plumbing is at your service 24/7. 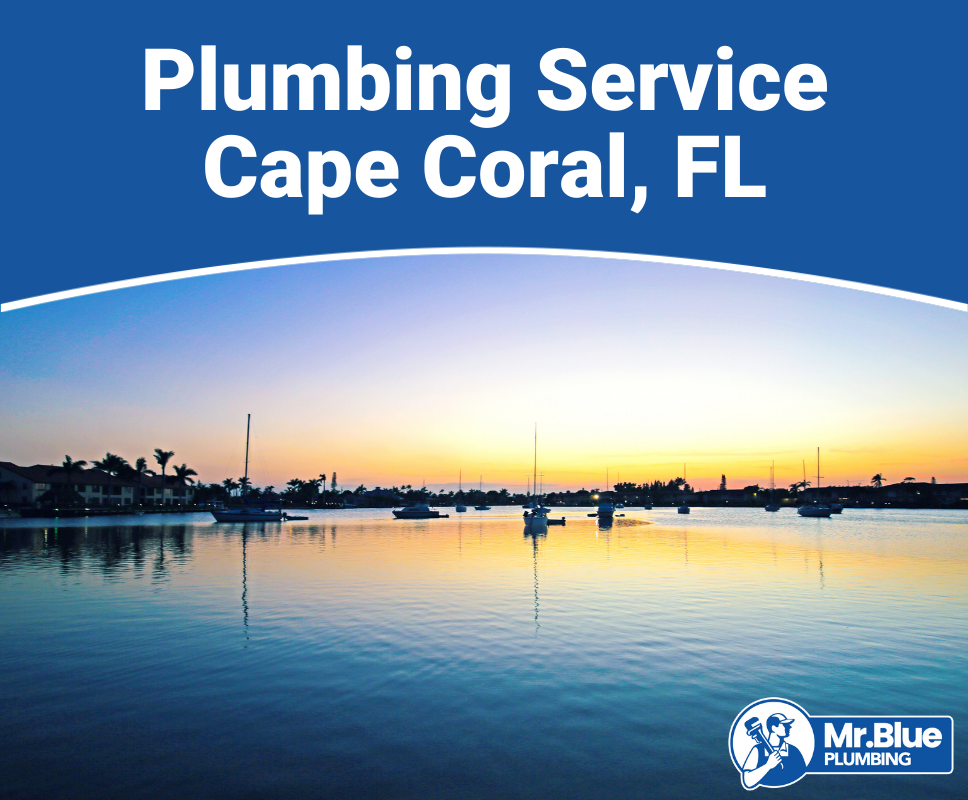 Tell us about your plumbing issue in the form and we'll get you connected with a Mr. Blue Plumbing expert in Cape Coral today!

What Are the Most Common Plumbing Issues in Cape Coral?

Cape Coral residents experience several plumbing issues similar to most other places in the country. From leaky faucets to clogged toilets, you can expect these common problems to pop up from time to time. For some older neighborhoods, there is the potential for pipes to break down and leach things like lead and copper into the water, particularly those nearer to the coasts if seawater manages to contaminate the water supply or come in contact with exterior pipes. Scale buildup on the insides of pipes can also be troublesome due to the city’s hard water. Hard water can promote lead contamination, decreased lifespan of pipes, appliances, and fixtures, and lower water pressure and slower drainage from mineral deposits inside your piping.

Cape Coral is subject to the effects of storms and hurricanes throughout the year as a city in Florida. Beyond the immediate problems caused by these, the massive amounts of water introduced by storms can cause the sewers to overflow. In the past, this has flooded the streets with sewage and damaged the city and residential pipe systems. As storms have grown more intense and frequent in recent years, these problems will likely worsen in the future.

How Does the Water in Cape Coral Affect Your Plumbing?

According to the city’s annual water quality report, Cape Coral gets its water from the Upper Floridan Aquifer. The water taken from the aquifer is originally brackish, requiring treatment to make it safe for human use. The bulk of this process is done through reverse osmosis, using areas of high and low pressure to force freshwater to separate from the contaminating elements found in the raw water being treated. Using sulfuric acid and a scale inhibiting agent lowers the water’s pH and helps with scale formation in pipes. Some raw water is added back to help stabilize the mixture before being degassed to remove any additional contaminants and hydrogen sulfide. Finally, chlorine is used to sanitize the water fully, and sodium hydroxide is introduced to raise the pH again to a neutral state. Based on the same water quality report, none of these chemicals or any potential contaminants from the raw water exist in the treated water at levels that would harm humans.

The average water hardness in Cape Coral is 178 PPM. The USGS defines both of these levels as “hard” water. Water is classified as hard based upon the amount of sediments dissolved within it, a higher number meaning more sediments contaminating the water. While hard water is generally not too harmful to humans (you might experience skin irritation at high levels like this), it can be devastating for your pipes. Hard water leaves those sediments on the pipes it flows through, those sediments building up into scales that coat the insides of pipes and plumbing fixtures. Scales like this can weaken the material it’s attached to and block water from flowing properly.

How Much Does Plumbing Usually Cost in Cape Coral?

Plumbing services in Cape Coral cost an average of $425, with a price range from $125 to over $900. While this is the standard for a visit, various factors can still change how much you’ll have to pay when the job is done. Here are a few potential things that might change how much you see on your bill.

The cost of materials and fixtures used during a plumbing job typically aren’t factored into the standard per-hour rate. If all you need is a drain cleaned out, this probably won’t mean much to you. If you need something like a water heater or toilet replacement, though, you’ll have to pay for the new plumbing fixtures in addition to the cost of service.

Calling our plumbers out on short notice tends to cost you more. You could probably guess as much given that a rush job or emergency call in any industry tends to cost more than a normal appointment. This is especially true if you need us there on the weekends, on holidays, or after normal business hours; these situations frequently add overtime pay onto the final charge. Take this as a reminder to get your pipes inspected by our plumbers regularly so you can hopefully avoid these extras fees and extra hassles.

There are several ways you might be able to lower or eliminate your plumbing bill through financial assistance programs at the state and federal levels. The USDA, for example, offers several housing repair loans and grants to homeowners all across the country with only a few requirements to receive that money. If a hurricane has recently come through the area (not uncommon), you might even be able to get money from a temporary relief program if the storm damaged your home. There’s also the potential for your homeowner’s insurance to cover the costs depending on the type of policy you have and the job you need to be done. This all comes out to mean a smaller bill when it’s time to pay.

Can Better Plumbing Save You Money in Cape Coral?

A plumbing appointment might cost money, but money spent now is often money saved later. By having us inspect your pipes for damage and getting minor problems fixed early, you’re sparing yourself from more serious issues going forward. In many cases, a major plumbing disaster is caused by neglecting a minor problem like strange noises when you flush or a slow start to your faucets. Even beyond that, simply fixing that leaky tap can save you a good chunk of change each year.

For these reasons and many more, you must take your plumbing problems seriously and call our pros when something seems off. That bill upfront may not be too attractive, but it’s much better than the alternatives.

When Should You Call the Water Utility Company in Cape Coral vs Hire a Plumber?

Deciding when it’s appropriate to call our plumbers versus the water company isn’t always as obvious as it may seem. While both groups deal with water and plumbing, what they do and what they can handle is pretty different.

To keep things simple, think of it as a question of where the problem happens to be located. For example, if the problem is that your drain is backed up and nothing goes down, that’s probably something our plumbers can fix for you. If everyone in your neighborhood has a drain that’s backed up, though, that’s evidence that a problem is much bigger than a single home and needs the city’s attention.

Even this isn’t always as apparent as it could be, though. How do you know if your water stopped running because of a problem in your plumbing or the city’s plumbing? Symptoms of these things can often be identical to the untrained eye. Because of this, we recommend you do a few things before you go to call someone, one of them being to ask your neighbors if they’re experiencing similar issues. If they are, that’s a sign that the utility company needs to know about this. If not, let us handle it. You can also try checking your water meter directly, as the meter running when you haven’t turned on the tap often indicates a broken pipe on your end of the meter.

Additionally, be aware that our plumbers can only take care of a problem they’re allowed to fix. Unless you own the property, we can’t do anything for you. If you see a neighbor’s house or lawn flooding when no one is home, you need to call the city to shut off their water since we’re not going to be busting down doors, likewise for something like a broken fire hydrant spraying the street.

When Do You Need Permits For Plumbing Service in Cape Coral?

Depending on the kind of work you need to be done on your home in Cape Coral, a plumbing permit could be required to get the job done. While the specifics are a bit more complicated, the easiest way to think about it as someone out of the loop is the question of potential damage. Things that can greatly damage property need a permit, while those that have a low chance to damage property won’t need one.

Unclogging a drain? No permit. Replacing the knobs on a faucet? No permit. Need a shower head installed? No permit. All of these things generally have a low chance of causing severe damage to property or endangering people, so you don’t have to run your plans by the city before you jump in.

Conversely, something like installing a water heater will need a permit. Installing something like this presents some severe risk if done wrong since you’re rigging a bomb to explode if you don’t properly set the pressure and heat levels. Likewise, ripping up pipes from underneath your house or in your walls can seriously damage your home and the surrounding property if done wrong, not to mention potential damage to pipes connecting to the city sewers.

Navigating situations with permits can be a bit tricky. This is why we always recommend you get our help when it comes to serious plumbing issues. Even if you’ve got the experience to do it yourself, staying compliant with local laws and permit requirements might still be foreign for you. To avoid damage to your home and costly fines for going about things the wrong way, enlist the help of our professional plumbers today.

Recent Requests We Received From Customers In Cape Coral, FL

Whole house reverse osmosis system, cost of. Trying to figure out if I can afford it. 2558 square feet, 3 bath home.

i need someone to service my well

I have a new water heater I want installed replace a old one and install a water filter system I have.