Looking for an affordable plumber in Palm Coast, FL? Great! Mr. Blue Plumbing is at your service 24/7. 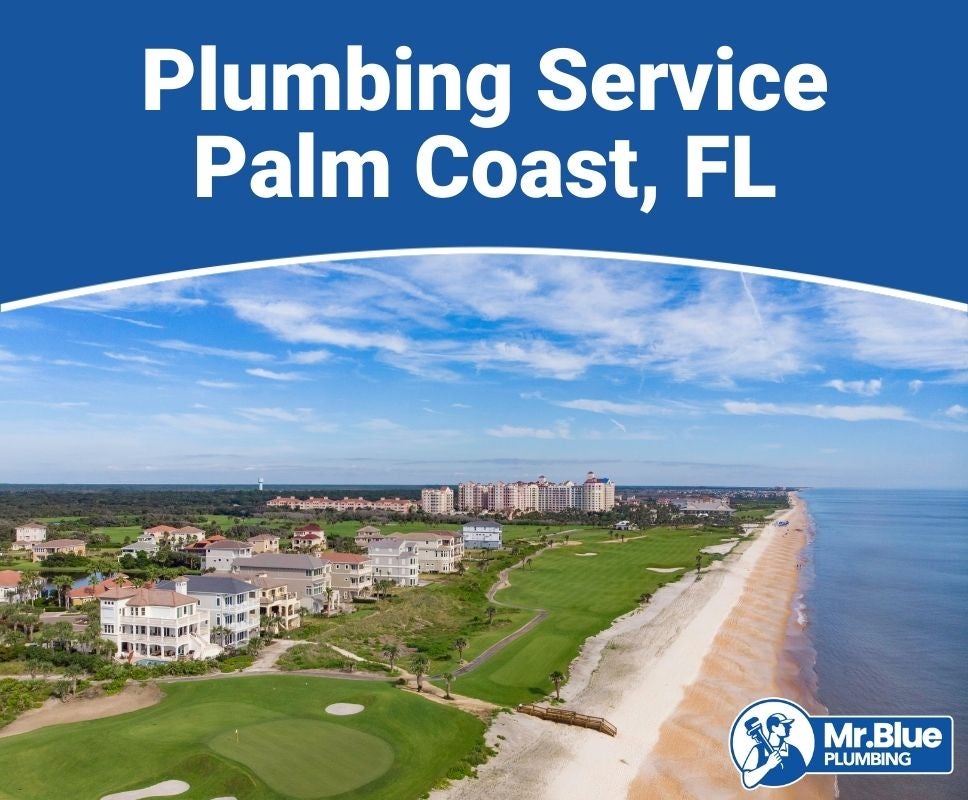 Tell us about your plumbing issue in the form and we'll get you connected with a Mr. Blue Plumbing expert in Palm Coast today!

What Are the Most Common Plumbing Issues in Palm Coast?

Usually, plumbing issues increase as the systems age, so we often receive more calls from older homes than newer ones. But generally, the most common plumbing problems in all homes include the following.

Leaky faucets are a universal plumbing problem across the nation. However, most of the issues we have handled in Palm Coast are often due to worn-out and broken parts such as washers, valves, etc.

Though one can be tempted to ignore leaks, especially if they aren’t drawing attention with an annoying drip, we often insist on the importance of addressing them as soon as they occur. One setback of leaking fixtures is that the water accumulates in areas where it’s not meant to, which causes structural damage. Leaks also lead to massive water wastage, with EPA (Environmental Protection Agency) estimating that 10% of households with water leaks waste more than 90 gallons per day.

Pipe leaks are another trouble spot for residents of Palm Coast. The issue is more prevalent in older homes where factors such as grown tree roots, wear and tear, and joint loosening are most common. Trees planted near houses eventually become troublesome after their roots have spread out and matured. We have had to dig out roots that have lodged beneath the pipes, pushing them out of place as they thicken. Often this results in cracks that let in roots to grow inside the lines, causing blockage over time.

Drain clogs are another common problem in most homes. Hair and other debris often find their way into drainpipes where they accumulate and cause blockage. Though some homeowners sort out simple clogs on their own, some blockages require more than using a force pump.

Water heaters require regular maintenance to keep functioning well. However, even though homeowners have taken excellent care of their heaters, mechanical issues do arise. In addition, as the heaters near their replacement timeline, problems often increase, in which case, we help the owners replace them.

How Does the Water in Palm Coast Affect Your Plumbing?

Unlike most parts of the nation, our water in Palm Coast is usually softer. This is because the City of Palm Coast treats and softens the water before supplying it to the residents.

Essentially, the water entering the city treatment plant is usually hard, which means it contains high amounts of calcium carbonate. After the treatment, 75% of the calcium is removed, and the hardness drops to 100 mg/L. According to the U.S. Geological Survey (USGS), hard water usually has more than one hundred and twenty milligrams of calcium carbonate per liter.

The presence of calcium, magnesium, and other minerals in the water often corrode the pipes. In regions with very hard water (181 mg/L and above), the corrosion level in pipes is usually very high. However, our city’s treatment plant adds a chemical called orthophosphate for corrosion control. Usually, calcium and magnesium corrode the pipes and plumbing fixtures, but orthophosphate counters their corroding activity by creating a protective layer.

Disinfecting water involves using chemicals to kill the pathogens and keep the water sterile as it moves through the pipes. Unfortunately, some of the chemicals used are harmful, especially to aqua life. People with allergies may also experience challenges after consuming considerable amounts of the treated water.

Environmental Working Group (EWG) observes that though the water passes the federal safety standards, it’s not entirely safe. One of their reports indicates that Palm Coast city water contains 12 contaminants. Besides the health implications on humans and animals, some contaminants disintegrate the rubber linings in plumbing lines and fixtures.

How Much Does Plumbing Usually Cost in Palm Coast?

Plumbing costs in Palm Coast depend on the plumber rates and material prices. Plumber rates vary according to the experience of the team member and the nature of work. For instance, if a project requires the expertise of a master plumber, you should expect to pay more than one which a journeyman plumber can handle. Complex projects will also command higher rates than simple ones. Generally, plumbers in Palm Coast can charge you between $40 and $200 per hour. While we quote most projects based on hourly rates, we often offer flat rates for smaller projects such as a toilet or sink repair.

As much as we charge standard rates, your quote will largely depend on the project type. For instance, installing or replacing a heater may cost you around $700 on average, while repairing the same averages about $400. A lesser involving task such as repairing a clogged drain can cost you about $160. On the other hand, major plumbing works such as repiping or new home plumbing installation cost several thousands of dollars as they take longer to complete and require more materials.

In most cases, we consider project complexity when quoting customers. Projects requiring more expertise are logistically complex which often are costlier. For instance, repairing a leaking pool requires more expertise than fixing a leaky faucet. While a journeyman plumber can comfortably handle the latter, the former requires a master plumber to oversee the work.

Materials are a significant plumbing cost determinant and they affect the costs from one project to another, one customer to the other. Plumbing materials exist in different grades and types. Homeowners who prefer using copper pipes or high-end plumbing fixtures pay more than those who opt for PEX pipes or standard fixtures.

While PEX pipes have lots of pros going on for them, they usually don’t outlast the copper ones; hence, you may have to replace them sooner. High-end plumbing fixtures are also multiple times expensive than standard ones but may have perks such as superior water-saving abilities.

Can Better Plumbing Save You Money in Palm Coast?

Better plumbing may involve incurring high expenses initially, such as acquiring high-quality materials and hiring top-of-the-range plumbers, but it can save you money in the long run. Some sure ways of saving money through better plumbing include:

If you have a conventional water heater, you can save money by replacing it with an on-demand heater. On-demand heaters, commonly known as tankless heaters, are cost-efficient in terms of energy and water savings. The heaters also have fewer mechanical issues than the tank-type models, which translates to lesser repair expenses. On-demand heaters have a longer life compared to tank-type heaters. Essentially, upgrading can cut down your heater replacement costs by half as they can last for more than 20 years, unlike conventional models which require replacement every ten years.

Another smart way of saving plumbing costs is by optimizing your plumbing layout. You can achieve this by designing amenities that require plumbing close together. For instance, your outdoor and indoor kitchen plus the laundry room can share supply and drain pipes if they are close to each other. Likewise, if your house has more than one floor, you can have the rooms requiring plumbing aligned on top of each other so they can share the pipes.

Installing water-efficient fixtures may be expensive initially, but you can end up conserving thousands of gallons of water, which translates to substantial cuts in water bills. If your house was built after 1994, or replacements have been done since then, chances are you’re using water-efficient fixtures as per the federal standards. However, you can cut the costs further down by replacing the fixtures with WaterSense-approved models.

For plumbing fixtures to obtain WaterSense certification, they must be at least 20% more efficient than the federal standardized fixtures. This means that if you have been using 1.6 water gallons per flush with a standard toilet, a WaterSense toilet can reduce the consumption further down to 1.28 water gallons per flush. In addition, installing a dual flush toilet can reduce water usage drastically as it allows one to choose either a full or half flush. You can also achieve similar savings by installing WaterSense faucets and showerheads.

When Should You Call the Water Utility Company in Palm Coast vs Hire a Plumber?

When faced with serious plumbing issues such as dry taps or reduced water pressure, you may get confused about whom you ought to call – the water utility company or the plumber. Usually, there are clear distinctions between their responsibilities. Below are a few of them.

When Do You Need Permits for Plumbing Service in Palm Coast?

Essentially, all major plumbing works require permit application for tasks such as installation, remodeling, and repairs or replacements that involve rearranging the plumbing lines. However, light plumbing tasks such as replacing a toilet, a sink, or repairing a water heater do not require a permit unless there’s an alteration of the original plan.

Recent Requests We Received From Customers In Palm Coast, FL

My master bathroom needs to be redone and I need to know how much it would cost.

Convert an existing corner bathtub into a jetted tub with heater.

Convert an existing corner bathtub into a jetted tub with heater.