Looking for an affordable plumber in Joliet, IL? Great! Mr. Blue Plumbing is at your service 24/7. 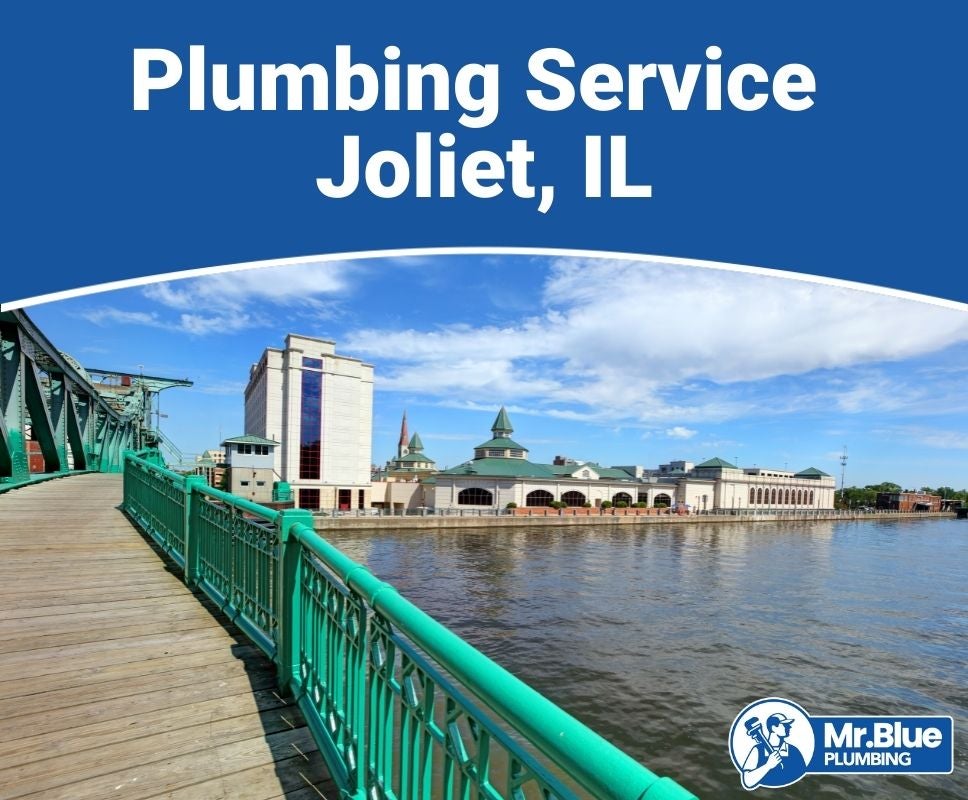 Tell us about your plumbing issue in the form and we'll get you connected with a Mr. Blue Plumbing expert in Joliet today!

What Are the Most Common Plumbing Issues in Joliet?

Plumbing problems in Joliet can vary from the mundane clogged toilet to more serious damage.

Similar to Chicago, Joliet has hot, humid summers and cold, snowy winters. Rain is not uncommon during the warmer months, and in rare instances, may cause flooding near the DesPlaines River. This has the potential to cause damage to the foundation and plumbing fixtures in the affected areas. Snow buildup in the winter can cause similar water damage if not cleared. Frozen pipes might also be an issue in winter and can lead to pipes bursting, leading to major emergency repairs and potentially even more damage to the building.

One of the major concerns for Joliet residents is hard water. Hard water causes the buildup of scale on the insides of pipes and other fixtures, wearing it down and damaging the plumbing apparatuses in buildings. Broadly, Illinois is already a hard water state with an average rating of 200 PPM, but Joliet blows past that with an astounding 388 PPM (that’s 23 grains of sediment per gallon of water). While hard water isn’t a major threat to humans, having this much sediment flowing through your pipes can cause major damage if the problems aren’t caught and treated early.

How Does the Water in Joliet Affect Your Plumbing?

Joliet currently gets its water from the Ironton Galesville aquifer below the city. However, research into the aquifer has found that it will not be able to meet the city’s water needs in as little as a decade from now. Because of this, various other sources of water are being considered for future use. As of December 2020, Lake Michigan has been chosen as the new source of Joliet’s water. Chicago will supply the water through its own systems, construction is expected to begin on Joliet’s new connecting pipe infrastructure by 2025.

As of this moment, there are a few different things added to the aquifer’s water in Joliet to make it safe for human use. The main chemical additive in the water is sodium hypochlorite (NaClO). This is a disinfectant that ensures that the water Joliet residents drink is not contaminated with any bacteria, viruses, or microorganisms. Hydrous Manganese Oxide (HMO) is also employed to remove the radioactive element radium from the water supply, as well as iron and manganese. Neither of these additives is dangerous to humans or to pipes when employed responsibly. Based on data collected by the city’s own water quality report from 2020, neither the level of contaminants nor these chemical additives are at dangerous levels.

Water in Joliet is also treated with an ortho-polyphosphate solution to help control corrosion of pipes. This reduces the breakdown of plumbing systems with the added benefit of reducing the amount of rust in tap water, making it look and taste cleaner.

According to the 2020 report, contaminants in water that persist despite these treatments largely stem from the breakdown of the plumbing fixtures themselves. Certain substances can leach into the water supply from the pipes themselves, especially if your system is older. Additionally, substances may leach into the water from sources like farming runoff, metal plant operations, or even septic tanks and sewage lines. While it is very uncommon for these substances to reach dangerous levels, elevated levels of substances like lead, copper, nitrate, and more might indicate that pipes have been damaged. This would be most common in older homes like those in the Upper Bluff District.

However, hard water continues to be the biggest plumbing danger in Joliet and many other places in Illinois. Early signs like a buildup of hard calcium deposits around a tap can signify that your pipes are beginning to scale. Lower water pressure, water-based appliance problems, and an off taste to your water are also indicators to look out for. You may also notice minor skin irritation.

How Much Does Plumbing Usually Cost in Joliet?

The average cost of residential plumbing services in Joliet is around $450, with services ranging from $125 to $875 at the low and high ends. Exact figures will depend on what kind of services you need to be done. Things like drain cleanings, fixing leaks, and changing faucet gaskets tend to be cheaper and easier, but major renovations like pipe replacements tend to cost you. There are numbers of other cost factors that may also influence the price of plumbing work, such as:

Not all plumbing jobs are the same. Certain services typically run you more than others. For our plumbers, more complex jobs mean more time and material spent on your pipes. On your end, that means more money paid out per hour. Though you won’t really be able to know how much or how long a job could take until an estimate happens, more serious problems like busted pipes could very easily take the whole day depending on how many pipes have been damaged.

Rush services tend to cost more regardless of what the services are, with plumbing being no exception. An emergency plumbing call typically adds some extra cost on top of the normal hourly rates for reasons ranging from after-hours overtime, on-call expenses for the early mornings, or calling in on a holiday or other off day for our plumbers. This goes double for when you neglect to shut off your water after something like a leak or busted pipe, as you’re just making the issue worse with more water damage and more time spent by our plumbers fixing the problem.

Not only can the cost of the material significantly increase how much you pay for our plumbing serviecs, but the availability of material can also cause problems. Replacing one or two sections of pipe may not be much of an issue, but overhauling the entirety of a home’s plumbing system is a different story. The amount of materials needed to do a job like this would definitely inflate the cost, as you’ll be responsible for the price of these new fixtures. New showers and baths will also cost more as you’re not just replacing a single fixture but cutting into walls and the floor to replace or add to pipes inside them, all of which will need to be restored after the fact.

Can Better Plumbing Save You Money in Joliet?

On the most basic level, good maintenance of your pipes and contacting our plumbers as soon as you notice issues can save you a lot of money. Fixing problems quickly and preventing them from happening will always cost less than emergency repairs or major renovations. If you’re hoping to save money and keep your water running without problems, taking care of your plumbing systems is essential.

Even before problems arise, you can still save yourself a lot of hassle with routine maintenance and checkups by our experienced plumbers. This will be especially important given how hard the water is in Joliet, as having someone to check your pipes, water heater, and other fixtures for scale will prevent much more damaging problems in the future. For those living in the older areas of the city like the Historic Districts or those who plan to sell their homes, these kinds of plumbing checkups are even more important for maintaining the value and integrity of the building.

When Should You Call the Water Utility Company in Joliet vs Hire a Plumber?

There are a few guidelines you can use to determine whether you should contact the water utility services or hire our plumbers for your issues. When it comes to your water services themselves, you’ll need to understand the issue to some degree before contacting the right people. Basic leaks or low water pressure are most likely to be issues in your personal plumbing, as is a visibly burst pipe in your home. However, if you suddenly lose water to your home entirely or you see evidence of flooding or gushing water somewhere else, that’s a problem you should take up with the county. If the solution doesn’t seem obvious, just remember this: If it only affects you, call our plumbers, but if it affects other people, call the water company. Ask around and observe the neighborhood to find out what normal water pressure is like and if anyone else is having problems with their services for extra insight.

When Do You Need Permits for Plumbing Service in Joliet?

For most minor plumbing work, no permit is required to work on your own home within the city of Joliet. The city may require residents to obtain building permits for larger-scale plumbing work, having a dedicated application for this type of construction on the city’s website. The form features an itemized list of costs for different types of work an owner can apply for, letting applicants know what kind of jobs require a permit and how much they will cost upfront to apply to make these renovations. While homeowners can apply for these permits on their own, the expectation is that they will be going through a plumbing service like Mr. Blue Plumbing during the process. This is for good reason, as our licensed plumbers have more experience in filling the forms properly and in dealing with any unexpected issues or additional red tape that may pop up in special circumstances. For this and many other reasons, we recommend this be the route you take as you fix your plumbing.

Recent Requests We Received From Customers In Joliet, IL

installation of a whirlpool tub with a heater. two outlets for the tub.

We are wanting to get a reverse osmosis system installed in our kitchen but would need a hole cut into the counter and wondering how much it would all cost.

Hi there, we have a Kohler steam shower that isn't working.