Looking for an affordable plumber in Oak Park, IL? Great! Mr. Blue Plumbing is at your service 24/7. 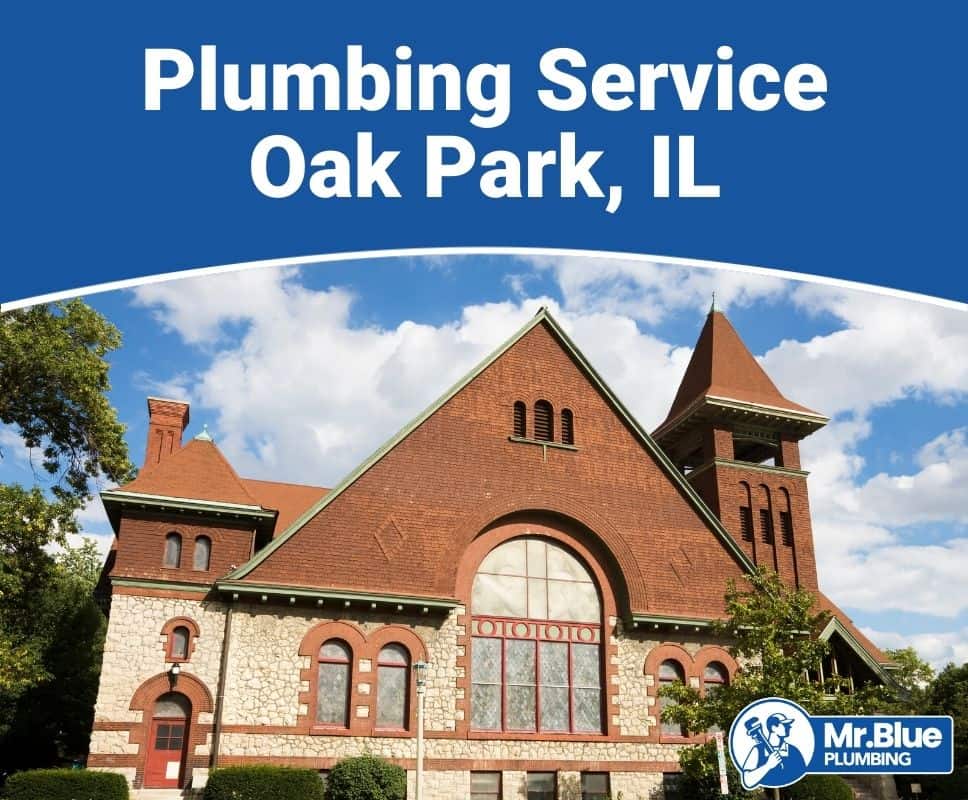 Tell us about your plumbing issue in the form and we'll get you connected with a Mr. Blue Plumbing expert in Oak Park today!

What Are the Most Common Plumbing Issues in Oak Park?

Oak Park suffers from much of the same plumbing issues that the rest of the country does. Places with older homes like Oak Park usually face issues regarding lead pipes and troubles with older plumbing.

We aren’t composed only of older homes, however. Newer plumbing faces problems too. Issues like leaking pipes, dripping faucets, overflowing commodes, and backed-up sewers are a problem here as well.

Some of Oak Park’s plumbing issues are due to foundation problems and weather. We live close to Lake Michigan, which also causes a few issues with sump pumps in some areas.

A few of the most common issues in Oak Park plumbing include:

Sump pumps in Oak Park can fail for a myriad of reasons including broken switches, clogged discharge pipes, improper installation, too much water, and aging. There isn’t a one-fix solution. If your sump pump fails to pump the extra water away from your property, it won’t be long before major damage sets in.

A catch basin must catch water runoff from rain and snowmelt to avoid flooding. There’s a high risk of clogging if there is debris in the water. When it’s clogged, it won’t be able to do its job, and the homeowners of Oak Park will be left to repair the damages. The solution is simply clearing the drain. Catch basins also deteriorate with time, which causes more issues.

Older homes in Oak Park built before the 70s usually have pipes made out of lead or copper. These materials are durable in normal circumstances, but break under extreme temperatures. Copper is also susceptible to corrosion, which leads to leaks and replacement pipes. Fortunately, today’s plumbing pipes are made out of PEX, which is more resilient and flexible than other pipe materials.

A faucet drips for all sorts of reasons. The problem could be a worn O-ring, clogged-up aerator, corroded valve seat, or just a loose washer. If you don’t fix the problem immediately, you may end up wasting thousands of gallons of water and hundreds of dollars per year.

How Does the Water in Oak Park Affect Your Plumbing?

The deposits from minerals like calcium build up inside faucets and pipes and cause a blockage.

A ton of mineral deposits in the pipes leads to clogs, but first, the flow of water will considerably slow.

When hard water deposits start to build up, appliances like washing machines and dishwashers don’t work as well.

How Much Does Plumbing Usually Cost in Oak Park?

With all the old homes and businesses spread around Oak Park, you might expect plumbing issues to be costly. This is surprisingly untrue when compared to nearby areas. The cost per job will typically range from $100.00 to $850.00. The overall average is $485.00.

How much will it cost for your repair? This will depend on a variety of aspects. Some of the biggest cost factors include:

It should be of no surprise to learn that the bigger the job, the more it’s going to cost. Plumbing jobs like a clogged commode can’t possibly cost as much as replacing a sewer line. The larger the scope of the job, the more labor, supplies, and equipment it will take to complete.

One surefire way to jack up the cost of your plumbing repair is to call for help outside of normal business hours. The cost of having us on-call is added to the normal costs. Emergency fees are usually in the $50 to $100 price range.

This is one of the big ones. Parts and labor are the two major things you’re paying us for. The price of the replacement parts you need comes out of your pocket. Replacing a faucet is less expensive than replacing a commode. We can’t tell the full scope of your problem until we take a look at it. In addition to your parts, you also have to pay for our time and skill.

Can Better Plumbing Save You Money in Oak Park?

Better plumbing can always save you money, no matter where you live. If you are living in a new Oak Park home, then you probably don’t have a reason to upgrade your plumbing. However, there are exceptions. Your water heater should work properly for around 10 years in normal settings, but with the hard water in Oak Park, you can expect it to work for fewer years.

If you have lived in your home for 8+ years, upgrading your water heater would help. By upgrading before there is a major issue, you avoid further problems. You will lessen the chance of leaks and buildup overflowing into your appliances, which could further increase your cost.

In Oak Park, consider installing a water softener to save your appliances and your water heater. It can help you:

Anyone who lives in an older home should think about upgrading or, at least, have the plumbing inspected. Even if there isn’t a problem, there could be issues that are lurking under the sink or even underground. If pipes burst, the damage could be much worse than replacing a pipe, especially since most leaks take time to appear.

You should consider upgrading plumbing if you have:

In any of these situations, an upgrade will help you more than you imagine.

When Should You Call the Water Utility Company in Oak Park Vs Hire a Plumber?

When the water starts flowing where it shouldn’t, how do you know whether to call us or the water division? No one wants to sound the alarm if there isn’t a valid reason. When it comes to water emergencies, however, maybe you should.

Here are some definite reasons to call us:

When Do You Need Permits for Plumbing Service in Oak Park?

The Village of Oak Park requires residents to have a permit for several plumbing needs. Whether you need a permit is ultimately decided by the job that needs to be completed.

Some main reasons include:

There are other jobs when a permit is not required. They include:

Recent Requests We Received From Customers In Oak Park, IL

Repair of a slow leak in shower; repair of caulk leak around a toilet.

I had a water pipe burst in my kitchen that I need to have repaired.

Need a back flow prevent or repaired or replaced. It is leaking.

We have a faucet in the garage that has begun to drip.

Leak in furnace room where water comes into house.