Looking for an affordable plumber in Wichita, KS? Great! Mr. Blue Plumbing is at your service 24/7. 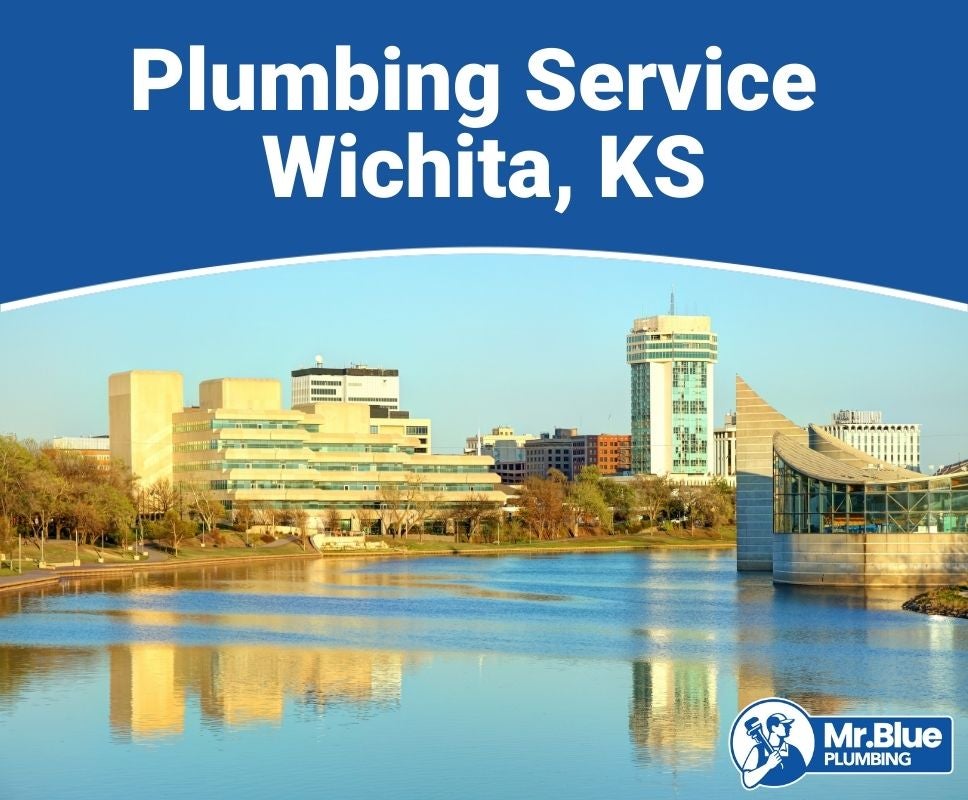 Tell us about your plumbing issue in the form and we'll get you connected with a Mr. Blue Plumbing expert in Wichita today!

What Are the Most Common Plumbing Issues in Wichita?

Plumbing issues can be depressing. From dripping faucets, to leaking pipes, and clogged drains, everyone would want to wish them away and hope they never happen in their home.

However, everything man-made is bound to have issues once in a while. Even with the perfect plumbing system, wear and tear do take place, necessitating attention. We have come across various plumbing issues in Wichita; some new and others are regular. Among what we have dealt with, the most common ones include:

This is more of a universal problem affecting homeowners countrywide, but it’s also pretty standard in Wichita. Worn-out washers, ill-fixed faucets, and corrosions are all likely causes of the leaking issues we come across.

Drippy faucets are annoying, to say the least. Not forgetting they can cause more damage and loss than one would imagine. The constant moisture can destroy surfaces and encourage the growth of mold. Drips also ramp up water bills over time, resulting in massive losses. U.S. Environmental Protection Agency (EPA) report indicates that 10% of households have water leaks (dripping faucets, leaky pipes, running toilets, etc.) that waste more than 90 water gallons per day.

Leaking pipes are also pretty common in Wichita. Some are easy to spot, and clients often call us over a wet spot on the yard, wall, or ceiling. In other cases, the leaks aren’t obvious and are only identified after the client investigates the cause of escalating water bills.

Wichita weather fluctuates from one extreme to the other – hot, humid summers to cold, dry winters. In between, there may be instances of prolonged dry seasons and excessive precipitation. These temperature swings take a toll on the pipes as they contract during freezing weather and expand when it gets hot. The pipe structure weakens, and they become susceptible to cracks and bursts. Joints also loosen from the constant expansion and contraction.

Other causes of pipe leaks include; corrosion, tree root invasion, bursts from too high water pressure, foundation movement, etc. In most cases, we only repair the problematic pipe. Still, some situations may call for complete repiping, especially where the lines have outlived themselves and the leaks occur in several places.

Running toilets are another source of trouble for Wichita homeowners. When flappers get damaged, toilets become a money pit, losing gallons of water daily, albeit silently.

We usually get calls to repair both tankless and tank-type water heaters once in a while. However, we have noted the tank-type heaters have more problems than the on-demand types. Tank heaters are more prone to leaking issues due to corrosion as the minerals in the area’s hard water eat up the tank material. The minerals also build up on the tank surfaces creating limescale, which insulates the tank and reduces the heater’s efficiency. Often, the clients complain of the heater taking too long to heat the water or electricity bills escalating too high.

How Does the Water in Wichita Affect Your Plumbing?

More than 90% of water in Wichita comprises surface and groundwater, which comes from two sources. These are the Cheney Reservoir, which supplies most of the water, and Equus Beds aquifer. We also get some water from local wells, but a negligible amount.

Though the water passes through treatment plants that meet the federal quality standards, some contaminants remain. Contaminants in water are usually disinfected by products. According to EWG, there are about 24 contaminants in our water, including chromium, fluoride, arsenic, and nitrates.

These are present in both surface and groundwater. Though groundwater is considered safe due to the natural filtration that occurs, the process is not 100% foolproof. Ultimately, the groundwater quality depends on the substances it has been in contact with. Not only do the contaminants make the water unsafe (at least according to Environmental Working Group (EWG) standards), but they erode the plumbing systems.

Again, Wichita water is hard, which though safe for consumption, wreaks havoc on the plumbing system. The U.S. Geological Survey (USGS) considers water hardness as the level of calcium carbonate present, which is measured in milligrams per liter. Water containing 0-60 mg/L is deemed soft, while 61-120 mg/L is moderately hard. If the water holds 121-180 mg/L, it’s classified as hard, while levels of 181 mg/L and above mean the water is very hard. Wichita water falls between 121-180 mg/L.

Usually, there are various minerals present in hard water. But its hardness is primarily caused by calcium and magnesium. The higher the mineral levels, the harder the water. As the water flows through the system, it leaves chemical deposits (limescale) on the pipes and plumbing fixtures.

When limescale builds up inside the pipes, it narrows them. This interferes with the water flow by reducing the pressure. If the water entering the main has too much pressure, the pipes may burst due to pressure buildup. The chemicals also eat into the plumbing materials and cause them to corrode. Over time, the pipes and fixtures develop pinholes and start leaking.

As earlier mentioned, hard water also reduces the efficiency of water heaters due to limescale buildup. The resulting corrosion may also shorten a heater’s life, leading to more frequent repairs and early replacement.

How Much Does Plumbing Usually Cost in Wichita?

The cost of hiring our plumbers in Wichita will vary depending on several factors. For instance, we usually cost the jobs based on the materials used, job complexity, and the time required to complete the job. Sometimes the quotes may vary from one neighborhood to another. The variances are usually due to the materials preferred by the households in such areas, which also determine the expertise level required in handling them.

Though our plumbers in Wichita typically charge hourly rates, meaning the cost you pay will depend on the time taken on the job, they set a minimum flat rate for every project. In practice, the minimum rate affects smaller tasks that take a shorter time to complete, but bigger projects cost in line with the time taken. However, the rates go down the longer the project takes. I.e., we may charge you, say, $70 per hour for the first three hours, then reduce the rate by $10 every additional hour up to a specific minimum rate.

Materials are another critical cost factor in plumbing jobs. If you’re using energy-efficient fixtures, you may end up paying more than someone using standard materials. The materials are further classified into low-end, average, and high-end, and they all cost differently. Using copper pipes instead of plastic ones may also lead to a higher spend.

Can Better Plumbing Save You Money in Wichita?

Better plumbing can save you money in Wichita. While it may, in most cases, cost you more initially, it leads to savings in the long run. Some ways you can save money through better plumbing include:

Water-efficient fixtures such as faucets, showerheads, toilets, etc., usually cost more than standard materials. But they eventually pay for themselves with utility bill savings. For instance, a high-efficiency toilet (HET) can cut down your water consumption by more than a half while delivering the same performance.

Designing rooms that require plumbing close together can significantly reduce the amount you spend on materials. For instance, if the laundry room and the kitchen are close together, they can share the supply and drain pipes. You can achieve the same by designing bathrooms on the same side on every floor. Not only would this save you money during installation, but at every subsequent replacement.

If you use a tank-type water heater, replacing it with the on-demand type can significantly reduce utility bills. Tank-type heaters involve heating the water in the tank, which may not be needed at a go. With tankless heaters, only the required water is heated as it passes through the heater.

Again, tankless water heaters have fewer problems than tank-type models. Issues such as limescale buildup and subsequent heater inefficiency are eliminated. On-demand heaters also have a longer life than the tank-type, lasting over 20 years. This saves you the cost of replacing the heater every ten years, which is the case with tank-type models.

When Should You Call the Water Utility Company in Wichita vs Hire a Plumber?

Drawing the line between your water supplier’s responsibility and your responsibility may seem like a straightforward issue until you’re faced with a problem that leaves you confused. The City of Wichita Water Utility and other utility providers have hotline numbers that allow consumers to make inquiries concerning their water service. However, knowing when to call them and when not to can resolve much of the headache.

When Do You Need Permits for Plumbing Service in Wichita?

Wichita City prohibits carrying out any major plumbing work without a permit. This includes installation, remodeling, and replacements involving altering the original plan. Usually, the city does not require a permit when conducting minor repairs or any plumbing service that does not affect the original plumbing plan in any way.

Recent Requests We Received From Customers In Wichita, KS

Frozen pipes and now toilet backed up into tub

I have tub faucet that has little water coming out.

I have a toilet with water coming in from an outside wall that the water has stopped flowing (assuming frozen pipe). I know when it the pipe unfreezes it will make a big mess and would like to schedule something now.