Looking for an affordable plumber in Houma, LA? Great! Mr. Blue Plumbing is at your service 24/7. 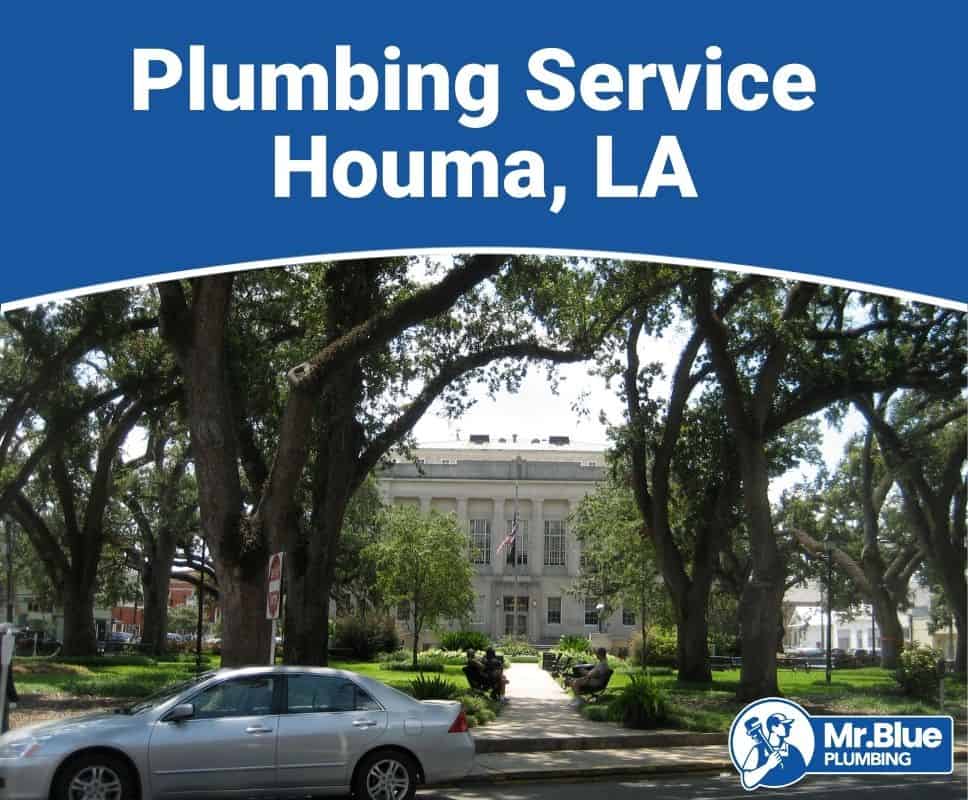 Tell us about your plumbing issue in the form and we'll get you connected with a Mr. Blue Plumbing expert in Houma today!

What Are the Most Common Plumbing Issues in Houma?

Perhaps the most notorious water issue the residents here in Houma have to deal with is flooding. Since the city sits at ten feet above sea level at best and is down to six feet in the Bayou Black area, rising water is a fact of life here. Houma is the only city in the US with Venetian-like canals running through the city – uplanders might call them swamps; here in the bayou, we call them canals and paddle our boats as much as we drive our SUVs.

Some plumbing malfunctions that are flood-related may not be evident for a few weeks, so you might not connect the dots, while others are apparent while the water’s still rising. These are the most common repairs that plumbers make in Terrebonne and Houma.

Remember in 2017 when Hurricane Harvey dumped more water along the Gulf Coast than the waterlogged city of Seattle gets in a year? High winds and prolonged heavy rain stress the pipes in your home, and stressed pipes can leak where they join. The pipes under your house are designed to withstand huge amounts of pressure from the surrounding dirt, but flood-saturated soil weighs a lot more and puts a lot more pressure on your pipes.

If your water pressure has dropped after a storm, leaks are a real possibility. You can check yourself by taking a look at the water meter when all the taps are closed. If the meter isn’t running, there’s no leak. If it is, then it’s time to call a licensed plumber to find and repair the leak.

Another problem is that floodwaters move really fast, and your plumbing pipes don’t exist in a vacuum; they are connected to the municipal system. When there’s a Harvey-like storm, dumping tons of water literally into the system, combined with overly-saturated soil, there’s a chance that the fast-moving water can cause your home to shift a bit on its foundation. If this happens, the pipes won’t move with the house, and the connections at the city mains will break, causing serious damage.

Your water heater should be at a high point in your home, but if it’s not then, it’s definitely prone to fail if there’s flooding. Rising water leaking into the heater will cause it to malfunction, and the only way you can really tell is when there’s no hot water – something nobody wants after a storm clean-up. Do not attempt to dry out the elements and re-start the appliance – it’s likely to catch fire, or worse, explode.

Don’t even try to inspect it if there’s standing water near the heater. Call an experienced plumber who knows how to stay safe.

Toilets in Houma and Terrebonne are also likely to go on strike after a storm. Sewer lines tend to back up when dirt and debris get picked up in stormwater and wind up in any exposed pipes running through the city. Adding to this, shifting pipes are a by-product of flooding, so the lines don’t drain as they should. While your pipes are fine, others may be causing problems. The best way to keep your toilets flushing properly is to have them inspected to ensure the lines are clear.

How Does the Water in Houma Affect Your Plumbing?

First, the water itself comes primarily from the Gulf Intracoastal Waterway, the Mississippi River, and the Atchafalaya River. When the Gulf water is too salty with chlorides greater than 250 ppm, the Bayou Black water temporarily replaces it. The salinity of the Gulf water increases as the water temperature is getting warmer – the average July temp is about 86°F, up 3°F from just a few years ago – great for swimming, but not for drinking. Terrebonne’s water treatment plant can assess the salt levels in the Gulf water and switch automatically to the Black Bayou supply.

The water in Louisiana is considered moderately hard, meaning there are some minerals in tap water, but not enough to mandate bottled water for everything. The most common minerals are sodium and magnesium, which dissolve in the municipal system but fall to the bottom of residential pipes and cause a build-up that will eventually clog the pipes. The minerals in hard water also make your appliances work harder, so they are not as energy-efficient as they’re supposed to be, and leave that grayish-shite scale on shower doors, around sink fixtures, and on your glassware. Hard water is also the reason your whites don’t come out of the laundry as bright as you would hope – it’s not the detergent or bleach; it’s the minerals that leave clothes dingy.

Water softeners can solve this problem; a whole-house system is not cheap, but it will be more economical in the long run, and your pipes, plumbing, appliances, and clothes will last longer.

And because every positive has an accompanying negative, the oil industry that provides so many jobs here is also responsible for groundwater contamination. Aside from the naturally occurring bacteria and microbes that come from wildlife, agriculture, and sewage treatment plant incidents, there are inorganic compounds that have an adverse impact on water quality.

The wastes from the refineries and other industrial processes result in trace metals found in the local water supply and synthetic and volatile organic chemicals. Then there are the pesticide and herbicidal runoff from agriculture that occasionally find their way into the groundwater and the random radioactive contaminants that are by-products of the mining and petroleum industries, or even just happen organically.

The good news? Terrebonne parish does a great job filtering out the contaminants and minerals in your water, so it’s perfectly safe for drinking and other household use. The taste may be better from a bottle or with a filtration system, but it’s absolutely safe.

How Much Does Plumbing Usually Cost in Houma?

It’s almost impossible to estimate plumbing repairs in Houma without a licensed plumber actually inspecting the job first. Most local plumbers will charge you for the service call but will apply that amount to the balance due as a credit if you hire them to do the work. Service calls average about $65 during regular business hours but skyrocket on weekends, evenings, and holidays.

The plumbing repair cost will also depend on the age of your home or whether the pipes have been replaced in older homes. You may live in a historic home from the 1800s that’s been completely renovated and has spanking new pipes and state of the art energy-efficient appliances, or a fairly modern – by Louisiana standards, anyway – home in the City Center neighborhood with original galvanized pipes that probably need to be replaced tout suite.

Other factors may influence the price, including:

The task itself is definitely a factor in determining the cost of a project, but the urgency of the job is honestly the driving force. If you have a backed-up toilet on a Tuesday afternoon, it’s urgent, no question. But if your toilet’s overflowing at midnight Christmas Eve, it’s worth a lot more to you to have the plumber crawl out of bed to fix it.

How complicated is the job? Some tasks have a fixed price – $200 to install a new faucet, for example. Others are quoted based on the expected time and labor required to complete the job, so if there are broken pipes or a flooded water heater to replace, the cost is based on those factors.

Where’s the problem? If it’s inside or under the house, the job is limited to plumbing. If the damage is in the pipes outside or in the walls, then your plumbing project is folded into a construction or landscape ordeal. Trenching the yard costs a lot more than replacing a toilet.

Can Better Plumbing Save You Money in Houma?

Updating your drains and sticking to a preventative maintenance schedule will not only cost less, but your risk of severe plumbing problems after a storm is dramatically reduced. Here are some tips to save your money and stress.

When Should You Call the Water Utility Company in Houma vs Hire a Plumber?

This is a fairly simple answer – is the problem in your pipes or the city’s? If the clog or break is in your line, it’s going to be located before the connection to the city main. You may need to hire a plumber to determine the exact location. Terrebonne Parish Consolidated Waterworks (TPCW) is responsible for fixing problems and maintaining the water supply for Houma.

When Do You Need Permits For Plumbing Service in Houma?

The state of Louisiana requires that you obtain a permit for any plumbing work at your home, including running gas lines. Your contractor can complete the forms online at tcpg.org. If the project’s expected cost is between $7,500 and $75,000, the contractor must have a Residential Contractor’s License. You may do the work on your own home if you sign an Affidavit Claiming Exemption from Licensure, but we do not recommend inexperienced homeowners trying to DIY a plumbing job more extensive than cleaning out a P-trap.

Recent Requests We Received From Customers In Houma, LA

The drain for the refrigerator/freezer is clogged or frozen. Water is backing up in the drain pan under the freezer and freezing.

Pipe repair on the street side. Exposed

Are you able to take out a small gas wall heater and cap the line? If so, what is the cost and when are you able to come out? I need it done quickly as someone is working on my walls now.