Looking for an affordable plumber in Natick, MA? Great! Mr. Blue Plumbing is at your service 24/7. 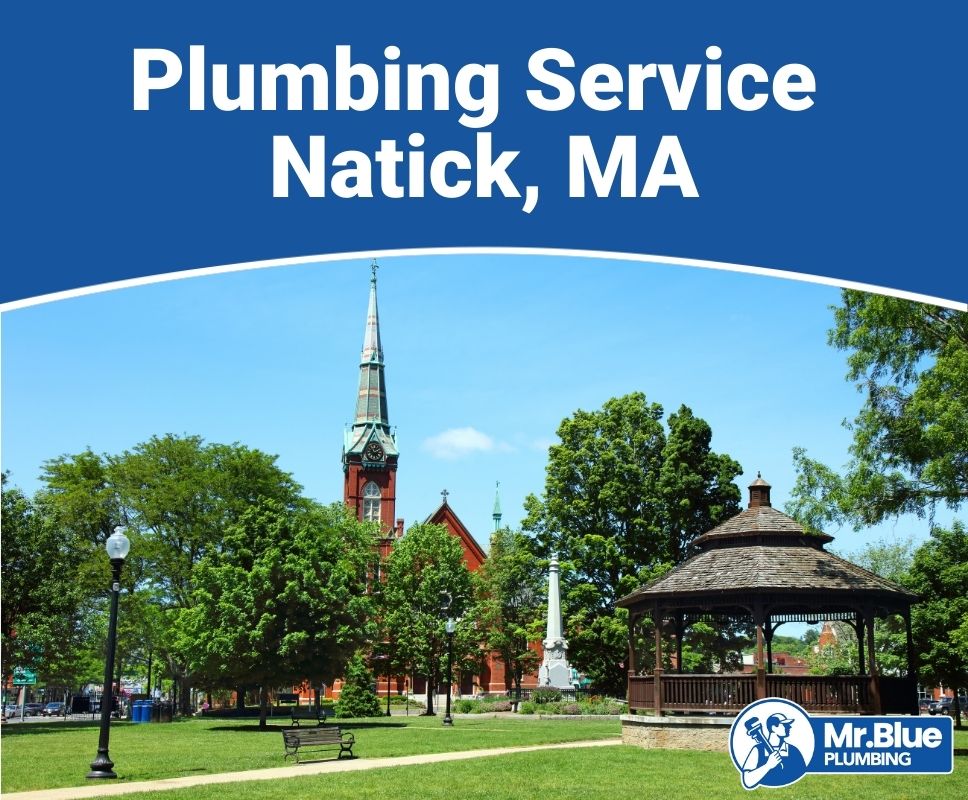 Tell us about your plumbing issue in the form and we'll get you connected with a Mr. Blue Plumbing expert in Natick today!

What Are the Most Common Plumbing Issues in Natick?

Plumbing issues in Natick vary depending on the nature of the plumbing system and the age of the home. Some problems are also more prevalent when the weather changes. However, the most common issues we receive calls for include the following:

Pipe leaks can occur anywhere—under-the-sink, yard, basement, walls, etc. The issues are more prevalent in older homes where the pipes have experienced prolonged wear and tear. While pipe cracks and bursts are not uncommon, most of the leaks we have come across occur on the joints. The issues also tend to increase during the cold seasons in Massachusetts due to contraction.

Running toilets are a universal problem affecting many households across the nation. Most of the repairs we have done in Natick involve faulty flappers, which, if ignored, result in massive water wastage. According to research, a running toilet wastes approximately 22 water gallons per day. Running toilets are common in Natick because the city’s hard water can deteriorate the flapper or other equipment more rapidly than in areas with soft water.

Leaky faucets are another typical plumbing issue we handle in Natick homes. Improper installation, worn-out washers, and o-rings are some common causes of drippy faucets. These issues come about in Natick more frequently because of the corrosive nature of the city’s hard water. If ignored, the leaks bring about losses, both in terms of increased water bills and structural damage to the surrounding surfaces.

Low water pressure is often a sign of underlying issues. In Natick, we have discovered most problems of low water pressure are caused by either hidden leaking pipes or water blockage. Clogs are caused mainly by limescale buildup from the hard water in the area, which narrows the pipes. In some cases, the blocks result from debris and tree roots getting into cracked pipes and clogging the line.

Drain clogs are also pretty common in Natick homes. These are caused by the accumulation of foreign substances, such as hair and food particles, inside the drain pipes. The minerals in Natick’s hard water also narrow your drain pipes and promote clogging. Where the clogs are occurring in a single drain like the kitchen sink or one of the bathrooms, we often use suction to unclog it. In cases where the problem stems from the sewer system, the entire home’s drainage may be affected, in which case we repair the sewer line.

Water heaters often present mechanical challenges once in a while, and Natick is no different. The most common issues we have dealt with include leaks, irregular temperature, slow heating, and broken parts. While we get calls for repairing both conventional and on-demand heaters, we have noted that on-demand heaters have fewer issues by far. Most water heater problems in the area stem, once again, from the city’s hard water, which deteriorates the inside of the tank, leaves deposits inside, reduces efficiency, and limits the lifespan of the equipment altogether.

How Does the Water in Natick Affect Your Plumbing?

In Natick, we source our water mainly from wells. These include Evergreen, Pine Oaks, Morse Pond, Springvale, and Elm Bank wells. Most of the wells are in Natick, apart from Elm Bank wells which are in Dover.

Like most parts of the nation, our water is usually hard. Some municipalities across the state receive softened water, but ours is supplied without softening. Usually, water hardness or softness is determined by the concentration of minerals in it, mainly magnesium and calcium. Our water is considered moderately hard, with a rating of about 90 mg/L. Mg/L stands for milligrams of calcium carbonate per liter of water. The United States Geological Survey (USGS) measures water hardness based on the following scale:

Magnesium and calcium in the water pose no threat to your health. However, the chemicals ruin the plumbing system in several ways.

As the water flows through the plumbing system, the chemicals stick to the surfaces, resulting in a buildup. Over time, the buildup narrows the pipes, clogs faucets and showerhead nozzles, leading to low water pressure. The limescale also reduces heating efficiency in water heaters by forming deposits.

The buildup of limescale corrodes the pipes, plumbing fixtures, and appliances. You may notice leaks more often because the minerals corride pipes, connections, o-rings, gaskets, aerators, and your fixtures.

Natick water also contains contaminants. Mostly, these are byproducts of the disinfection process. Environmental Working Group (EWG) reports that Natick water contains 22 contaminants with arsenic, chloroform, nitrate, and chromium, among those exceeding EWG’s standards. The contaminants are harmful to people (especially those with immune-related conditions, infants, and the elderly) and the plumbing system. As such, we often get calls to install a whole-home filtration system.

How Much Does Plumbing Usually Cost in Natick?

The cost of hiring our plumbers in Natick varies, depending on various factors, such as labor costs, materials used, and the project type. Most jobs fall between $125 and $900.

We often charge hourly rates for most projects but quote flat rates for smaller projects, such as fixing a sink or repairing a toilet. Our master plumbers usually charge more than, say, journeyman plumbers. But hiring our experts ensures that the job is done properly the first time around.

Materials determine the overall plumbing cost to a larger extent. For instance, using WaterSense fixtures would generally cost you more than standard products. In the same way, installing copper pipes is much more expensive than, say, PEX pipes.

Plumbing costs vary from project to project. Even where two projects take the same time to complete, their charges may vary significantly due to the expertise and materials required. For example, installing a toilet can cost you around $500, while installing a bathtub would average around $2,500. Likewise, unclogging a drain costs $170 on average, while cleaning a sewer line costs at least $250. On the other hand, water softener installation can cost about $1,500, while installing a sump pump would cost you $1,300 roughly.

Can Better Plumbing Save You Money in Natick?

Better plumbing can save you money, albeit in the long run. Mostly, better plumbing goes hand in hand with a hefty cost outlay. However, there are fewer instances where you can save money without spending more initially, such as adopting a smart plumbing layout.

Other ways of saving money would include:

According to the U.S. Environmental Protection Agency (EPA), water-efficient fixtures pay for themselves besides saving water bills over their lifetime. Its program, WaterSense, encourages manufacturers to produce products that exceed the federal water-saving standards by at least 20%.

Overall, if you have been using federal standardized fixtures, upgrading to WaterSense-labelled products can reduce your water consumption by 30%, which is quite substantial. For example, in EPA’s estimation, a WaterSense faucet can save more than 10,000 water gallons over its lifetime.

Tankless water heaters are more cost-efficient than conventional tank-type models. The heaters do not store water. Hence, issues of limescale buildup and subsequent corrosion and heating inefficiency that are common in Natick are significantly reduced. On-demand heaters also have a longer lifespan, sometimes exceeding 20 years, which saves you the cost of replacing every 8-10 years. Though mechanical issues arise in both, tankless water heaters require fewer repairs and maintenance, thereby saving you money in the long run.

The higher the water pressure coming out through the outlets, the more water you consume. While water-efficient fixtures help reduce the water pressure by compensating with air, you can still save more by installing pressure-reducing valves on the main. Usually, recommended water pressure is between 60-70 psi (pounds per square inch), but reducing the pressure to around 35 psi can significantly minimize your water usage. However, you shouldn’t let the pressure drop to below 20 psi to avoid contamination.

When Should You Call the Water Utility Company in Natick Vs. Hire a Plumber?

Do you often get confused about when to call the water utility company or when to hire our plumbers? Sometimes, it’s possible to get thrown off by plumbing woes and find yourself going for help in the wrong quarters. Below are a few distinctions on when calling either of the two is ideal.

When Do You Need Permits for Plumbing Service in Natick?

Natick town authorities require you to obtain a permit before hiring our plumbers for installation and remodeling work. In addition, any repairs or replacements that require rearranging the piping also need a permit. However, minor repairs, such as fixing leaky faucets or valves, clearing stoppages, replacing a sink, etc., do not require a permit.

Recent Requests We Received From Customers In Natick, MA

I am looking for a reverse osmosis system to be installed under my kitchen sink.

Hello! I hope you are doing great - Happy Friday! I recently bought a water softener

Question on starting up my pump after freeze