Looking for an affordable plumber in Lansing, MI? Great! Mr. Blue Plumbing is at your service 24/7. 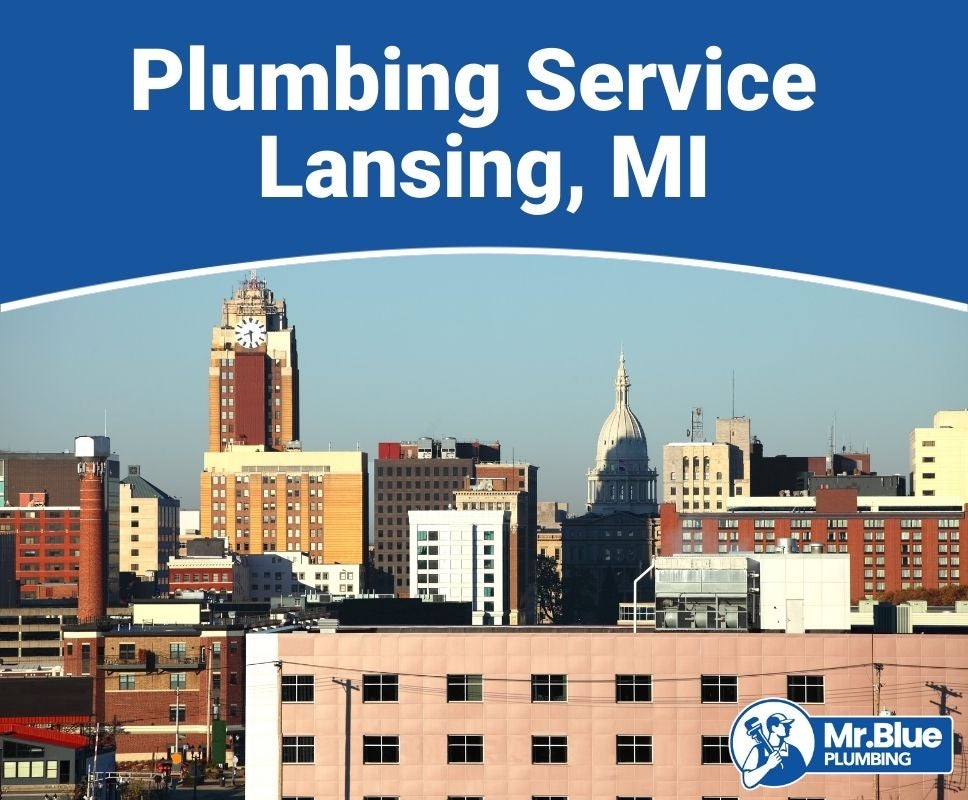 Tell us about your plumbing issue in the form and we'll get you connected with a Mr. Blue Plumbing expert in Lansing today!

What Are the Most Common Plumbing Issues in Lansing?

Plumbing issues in Lansing range from faulty fixtures and appliances to clogs and leaks. These vary from one neighborhood to another, depending on the age of homes.

Lansing has more than fifty neighborhoods, with homes built at different times. For instance, Wood St / Lake Lansing Rd’s homes are pretty aged, with most of them having been built between 1940 to 1969, while some were built from 1970 to 1999. Likewise, most Delta River DR / Josette Ln’s homes were built between 1970 and 1999, while some are from the 1940s to 1969. On the other hand, S Dewitt Rd / W Clark Rd’s are relatively newer, having come up after 2000. But there are also several residences built between 1970 and 1999.

That said, the most common plumbing issues we have come across in our day-to-day calls include the following:

Pipe leaks are quite common, especially in older Lansing homes. These result from issues such as corrosion and joint loosening. Sometimes, the loosening occurs due to extreme weather changes. The frequent expansion and contraction of pipes wear the joints out, leading to eventual leaking. Similarly, as tree roots grow beneath the lines, they exert them upwards which causes the joints to loosen.

Corrosion is another common pipe leak cause, primarily affecting metallic pipes. Though most homes have newer lines following the elimination of lead pipes directive, corrosive, and high-pressure water has been deteriorating them pretty fast.

Drain clogs are another pesky plumbing issue we get calls over. In most cases, the clogs are due to the accumulation of hair or food particles in the case of a kitchen sink. Usually, those require quick fixes, especially where the clogging is localized to one area, say, the bathroom drain. But where the blockage occurs across several drains in the house, it’s usually an indication of a sewer line problem. In Lansing where the water is relatively hard, residents can experience mineral accumulation on the insides of their pipes, causing blockages.

Toilet clogging is also a common plumbing issue across Lansing homes. Like bathroom and kitchen sink clogs, the problem can be minor or significant, depending on the cause. Most toilet clogs are due to excessive use of toilet paper or non-flushable wipes. However, we come across major blockages once in a while caused by the hard water in the area. Many often result from improper use such as flushing women’s hygiene products, kids flushing items down the drain, or as a result of a sewer line problem.

From drippy faucets to showerheads and running toilets, leaky fixtures are an expensive plumbing failure. Not only do they increase moisture in the home and encourage the growth of mold, more so in the case of drippy faucets and showerheads, but also they’re pretty wasteful. The nation can lose almost 900 billion water gallons per year through leaks. Broken down to the household level, a home with leaks wastes about 9,400 water gallons annually or 180 gallons per week. This issue is made worse both by Lansing’s hard water and the age of the pipes.

Water heater failures are another plumbing issue that trouble Lansing residents. Sometimes, they call over irregular water temperature, squeaky noises in the heater, water not heating at all, leaking units, etc. The issues are often caused by various factors, such as worn-out or broken parts, a buildup of limescale and subsequent corrosion from the city’s hard water, improperly installed parts, or normal wear and tear.

We often sort most issues out by repairing the problematic area, but we recommend replacing the heater in cases of wear and tear resulting from aging. Replacement spans for tank-type and tankless heaters are 10 and 20 years, respectively.

How Does the Water in Lansing Affect Your Plumbing?

Lansing mainly gets its water from ground sources – over 100 wells that feed the Saginaw Sandstone Aquifer. But the aquifer is also replenished from surface water sources (lakes, streams, wetlands).

Once at the treatment plants, the water is disinfected, softened, and filtered before supplying to the residents. Nonetheless, it still retains some level of its hardness. Usually, water hardness is measured as milligrams of calcium carbonate per liter (mg/L). The standard scale as per the U.S. Geological Survey (USGS) is as follows:

Lansing water measures 99 mg/L, which makes it moderately hard. This means it’s relatively corrosive. Corrosive water usually leaches out minerals from the surfaces (metallic pipes, appliances, and fixtures) it passes through. As a result, they wear out with time, develop pinholes, and start leaking.

Again, the water still contains substantial amounts of minerals that stick to the surfaces and build up over time. The buildup, commonly known as limescale, narrows the pipes, which then reduces the water pressure. Showerhead nozzles and faucets also clog due to the buildup.

But perhaps the biggest trouble occurs on water heaters as the minerals coat the coils, thereby minimizing their efficiency. As a result, the energy costs increase as the heater consumes more power to heat the water. This is in addition to the troubles of possible leaks caused by corroded heater surfaces.

Lansing water also contains contaminants. These are mainly byproducts of the treatment process. According to the Environmental Working Group (EWG) tests, our water has twelve contaminants, of which four exceed their health guidelines. Not only are the contaminants harmful to people’s health, but the chemicals also harm the plumbing systems.

How Much Does Plumbing Usually Cost in Lansing?

The cost of hiring a plumber in Lansing varies depending on various factors, but most jobs fall between $115 and $820, with an average of $400. For instance, an installation project costs more due to the material costs involved. Generally, the most common cost factors include labor, material, and project type.

Labor costs are a main component of a plumbing quote. Our plumbers in Lansing usually offer hourly rates, but they vary based on the the project involved.

Generally, hourly costs range from $60 to $80. But we often charge a flat fee for minor projects as the hourly rates may fail to cover all the project overheads sufficiently. For instance, drain line inspection and drain unclogging can cost you about $240 and $120, respectively.More time-consuming jobs will naturally cost more.

Our plumbing quotes often factor in material costs. This means they vary based on the type and quality of materials a customer prefers. Generally, high-quality materials usually cost more but last longer.

Our plumbers also consider the project complexity to arrive at the final quote. A more complex project often commands higher rates even though it takes the same time to complete with a less complex one.

Can Better Plumbing Save You Money in Lansing?

Better plumbing may be expensive in most situations, but it can save you thousands of dollars in the long run. Some ways of saving money through better plumbing include:

Upgrading your heater from a conventional to a tankless model can save you so much in the long run. The latter, as its name suggests, does not store water but heat on demand instead. This reduces the energy costs associated with tank heating as much of the water heated is not always needed at a go.

Water-efficient fixtures are great money-savers both in terms of water and energy bills. WaterSense products can help you save even more, as the U.S. Environmental Protection Agency (EPA) only certifies products that conserve at least 20% more water than the standard water-efficient fixtures. Essentially, replacing your old fixtures with WaterSense-labelled ones can save your family more than 30% in annual water costs.

When Should You Call the Water Utility Company in Lansing vs Hire a Plumber?

Some water issues can be confusing. For instance, if the supply line starts leaking in your yard, whom should you call?

If you’re often at crossroads, not knowing whom to call when confronted with some problems, here are a few distinctions.

When to Hire Our Plumbers

When Do You Need Permits for Plumbing Service in Lansing?

The City of Lansing requires you to obtain a permit before engaging our plumbers for installations, remodeling, and any replacements requiring altering the original plan. Other minor jobs, such as repairing a faucet or clearing stoppages, don’t need a permit unless they involve altering the existing fixtures or piping.

Recent Requests We Received From Customers In Lansing, MI

No water from my well. I put a tarp over the well and ran a space heater over night with no success. Please reply as soon as possible. Thank you

Hot water pipe on washer popped. Need fixed we're without water. The meter is shut off!!!

Hello! We are looking to replace our existing bathtub with a new one. Thank you!