Looking for an affordable plumber in Billings, MT? Great! Mr. Blue Plumbing is at your service 24/7. 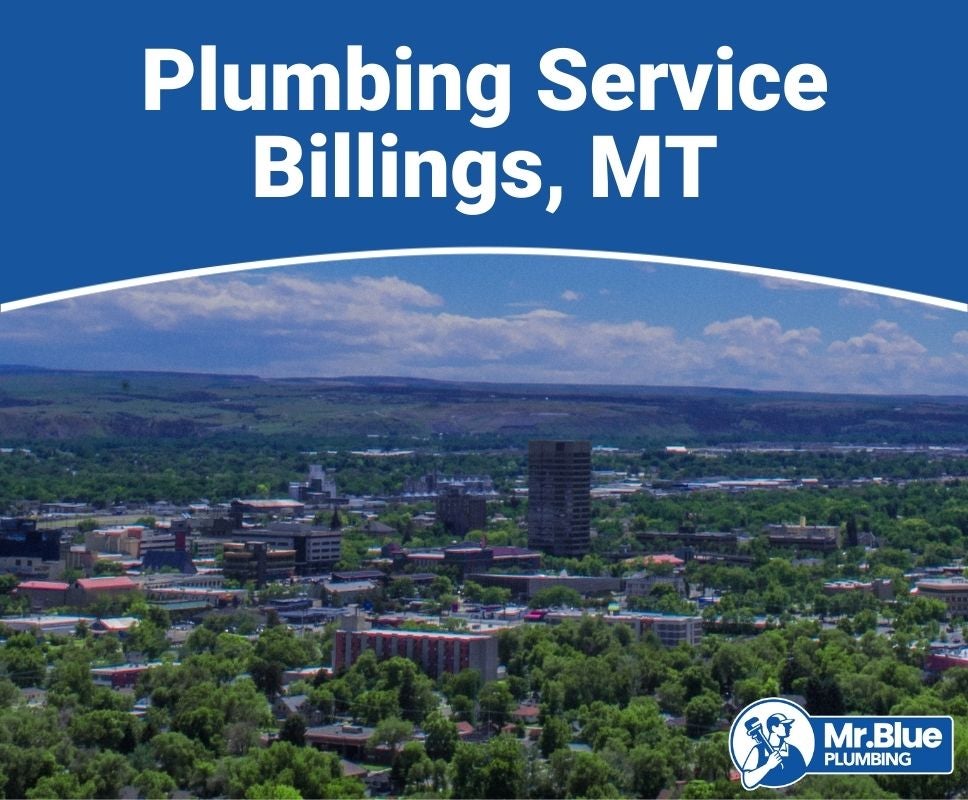 Tell us about your plumbing issue in the form and we'll get you connected with a Mr. Blue Plumbing expert in Billings today!

What Are the Most Common Plumbing Issues in Billings?

Leaking, whether it’s from pipes or faucets, is the most common plumbing problem that Billings residents face. It’s not hard to figure out why. You’ve got lots of pipes running under your house, in the walls, and sometimes even in the ceiling. And when you stop to think about it, there are faucets galore in your average house, like in your kitchen, bathrooms, laundry, and sometimes in the garage.

It’s not uncommon to miss leaks until they turn into a major problem. One day, you notice the shower keeps dripping and the next thing you know, your water bill is up significantly.

Most homeowners have no reason to expect that their pipes are leaking until they get that high water bill or notice water spots on the walls or ceiling. You need a professional like Mr. Blue Plumbing to not only assess the damage, but also to find the source of the leak. These are some of the reasons a pipe may leak:

Billings is one of the coldest cities in the country during the winter, and locals are no strangers to frozen pipes, which happens when water in them stops flowing and freezes.

The frozen water expands in the pipe, creating pressure on the sides. There’s not enough space in the pipe for the frozen water since the tap is usually turned off when pipes freeze, so the pressure causes the pipe to pop open at the joints and seams. Burst pipes are most likely to happen when the ice in the pipes begins to thaw out.

Drain clogs are another common problem for Billings residents. In the kitchen, a buildup of cooking oil and food waste clog disposals and drains, while the bathrooms offer a variety of opportunities for blockages. Keep this in mind: the only thing that we should flush down the potty is toilet paper; do not flush paper towels, baby wipes, or tissue.

In Billings, the hard water can also contribute to clogs and slow drains. The mineral build-up makes your pipe diameter effectively smaller, meaning it will be easier for blockages to form.

How Does the Water in Billings Affect Your Plumbing?

All of the drinking water in Billings comes from the Yellowstone River, which is not quite as pristine as you would hope. A 2015 oil spill, a 2018 settlement between the EPA and a ranch upstream, contaminants in the water… Billings does have a modern water treatment plant to deliver clean water to your taps, but it’s an uphill battle. In 2019, the city issued a report on water quality, and frankly, it’s a little scary. While they didn’t find enough of any one contaminant to render the water unsafe, there is a little bit of a lot in the water, enough that immunocompromised residents should drink bottled water.

As if a little arsenic and asbestos in the water aren’t enough, the water in Billings is fairly hard, 123 ppm (120-180 parts per million is considered hard). How can you tell when water is hard? Hard water leaves your hair feeling sticky and dry, and it leaves white spots on your glassware and around faucet aprons. It’s not dangerous, but it’s a real nuisance when your clothes come out of the wash dingy and stiff, and your skin is always dry.

Calcium and magnesium are the worst offenders in hard water. The minerals flow through the pipes in minuscule granules that eventually dissolve, but the microscopic residue settles in the bottom of pipes and water heaters, building up as time goes by, until the pipes are narrowed and the water heater has a layer of accumulated silt. The results? You don’t get the flow you expect because the pipes have more or less shrunk, and your water heater has to get through the buildup to heat your water. Additionally, the buildup will cause rust and corrosion in the water heater, guaranteeing it will leak.

There is also chlorine in the water which can give it a slightly bleachy taste and is terrible for skin, hair, and laundry. Chlorine also erodes the rubber seals in your pipes and plumbing, causing leaks and drips.

How Much Does Plumbing Usually Cost in Billings?

Most plumbing repairs in Billings will cost between $150 and $875. Your total will depend on the below factors.

As with any service, the single biggest factor in estimating the cost of a plumbing repair is the labor. That’s one of the reasons our plumbers have two pay scales. One is for simple jobs like clearing out a sink drain; the other is for more complicated projects. They’ll have a flat fee for the basic stuff, but the prices of jobs that require ordering parts and hours of labor are based on all of those considerations.

If you’ve ever had a toilet back up during the holidays, you’re well aware that plumbers charge quite a bit more for those emergency services. Expect to pay about $500 for that late-night service call that would have run you just about $150 had the toilet been thoughtful enough to back up in the afternoon.

Whether the work is indoors or outdoors also matters, and not just because it’s so cold in the winter. Inside work is typically pretty straightforward, like clearing out a clog in the p-trap under the sink. Once the leak or clog heads outside and is in the pipes under the house or in the yard, that is usually a sign that the problem is a leaky pipe or a burst sewer line. Outside plumbing means digging trenches, tunneling under slabs, and replacing pipes. So more complex repairs could cost several thousands to repair.

The overall scope of work matters, too. Some jobs require electricians, contractors, and landscapers to button the house back up after we have gone through drywall or ripped out the landscaping. Whether your home is on a slab or piers also matters. Digging a trench under the house is cheaper than tunneling under a slab.

Can Better Plumbing Save You Money in Billings?

Upgrading and maintaining your plumbing can save you money, and the fixes range from a weekend DIY project to replacing your appliances.

Completely closing the taps is just easy. Make sure you give the faucet handle a final twist to ensure it’s shut before you leave the sink or shower. If it won’t stop dripping, replace or repair the fixture. A leaky faucet wastes up to 15 gallons of water a day, and it does add up. Low flow showerheads also reduce the water you use in the shower, and you get just as squeaky-clean. They’re easy to install, and basic models are pretty inexpensive.

In a place like Billings, where it’s likely to be frozen solid for months on end, winterizing your pipes with insulation can protect against leaks in the spring. Local hardware stores have precut insulation that you wrap around the exposed pipes, especially near the water heater. Winter is the one time you want to leave taps open just a bit, particularly the outside or seldom-used taps. It’s key to keep the water moving through the pipes to avoid freezing and bursting.

Drains need a little maintenance, too, to keep them free from the buildups that eventually cause clogs and that dreaded midnight call to our plumbers. Again, a little DIY can help your drains run freely by pouring a little baking soda and white vinegar down the drains about once a month. The solution will dissolve any soap scum residue that’s accumulating in the drains. A strainer over the drains in the kitchen sink, tubs, and showers will catch any long hair or food waste that will adhere to the soap scum and create a blockage. Try to avoid using commercial drain cleaners to unclog your drains; they don’t work all that well and damage pipes.

This is Housekeeping 101, but never put cooking grease down your drains or you’ll be calling our plumbers within a week.

A whole house water filtration system is certainly not a cost-saver at first glance, but it is cost-effective in the long run. The first thing you’ll notice is that you don’t have to buy bottled water anymore, a win for your wallet and the environment. Your clothes will last longer as the fibers won’t get degraded in the wash. Your hair and skin will not be so dry, which means fewer trips to the dermatologist. The downstream effects, if you’ll pardon the pun, are worth investing in this kind of system.

When Should You Call the Water Utility Company in Billings Vs Hire a Plumber?

The city of Billings is responsible for any sewer line (a sewer line is any line that’s leaving the house) past the point of connection on your property or what’s typically called the water main. If the city finds a blockage, they will clean out the line; but, if they determine it’s in your line, they’ll let you know and send you the bill. If the blockage is in your line, what the city calls the lateral, you’ll need to call us to remove the clog. Sometimes, the only way to know is to call us, but we’re always happy to help and can direct you to the water authority if needed.

When Do You Need Permits for Plumbing Service in Billings?

Any time you are moving or adding pipes and fixtures, you’ll need a permit from the city, and an inspection before you can use the plumbing itself. You can apply for a permit online, or our professionals can do the hard work for you.

Recent Requests We Received From Customers In Billings, MT

Kitchen sink does not drain which affects the wash room drain also.

Cost to install a toilet for my mother.