Looking for an affordable plumber in Goldsboro, NC? Great! Mr. Blue Plumbing is at your service 24/7. 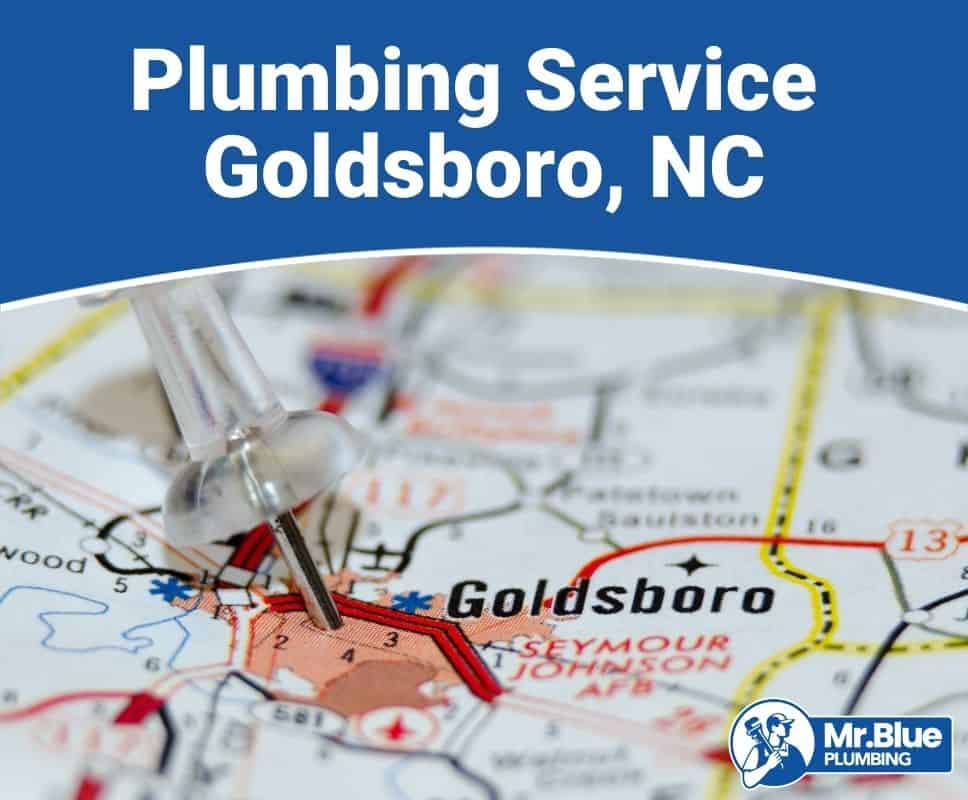 Tell us about your plumbing issue in the form and we'll get you connected with a Mr. Blue Plumbing expert in Goldsboro today!

What Are the Most Common Plumbing Issues in Goldsboro?

The residents of Goldsboro are susceptible to the same plumbing issues affecting the rest of the nation.

To begin with, there’s the obvious matter of climate. Goldsboro is a warm, temperate city positioned in the North Carolina coastal plain. The region experiences a fairly generous amount of downpour, with about 1,206 mm of rainfall coming down every year. Even in the driest month, precipitation still falls on the city. Unfortunately, this kind of weather provides the perfect conditions for pipes to rust. And naturally, with rust comes a ton of other plumbing issues.

Apart from the region’s climate, another factor that contributes to plumbing complications is the general age of houses in the region. Over 4,500 units were constructed before 1960, which means that most of them lack heat sources, proper plumbing, and kitchen planning. If you know a thing or two about plumbing systems, then you know the old plumbing systems were not exactly the most efficient. Most of them relied on galvanized pipes, which have a lifespan of 16 years. After they expire, they go on to leak up to 50% of their content.

As a result, here are a few common plumbing issues that you can expect to experience in Goldsboro:

How Does the Water in Goldsboro Affect Your Plumbing?

Little River, classified as a class WS-III River, is the main water source used in Goldsboro. It runs through the city’s western side, with Stoney Creek running on the eastern side. The city of Goldsboro is in total compliance with National Primary Drinking Water Regulations, ensuring clean, safe water when you open your tap.

Before reaching Little Valley, water dissolves naturally occurring minerals such as magnesium, copper, iron, and radioactive materials, affecting the quality of drainage pipes. Most minerals create conditions that cause pipes to rust. The water could also house microbial contaminants, such as total coliform, fecal coliform, and E.coli, which adhere to the sides of pipes, forming a biofilm.

Biofilms grow on surfaces in contact with water and food. This, in turn, makes drainage pipes a great habitat for microorganisms to thrive. Biofilms gradually increase pipe corrosion and, over time, adversely affect pipe hydraulics and lifespan, which means frequent, expensive repairs.

How Much Does Plumbing Usually Cost in Goldsboro?

While most plumbing issues seem easy to fix, this is usually not the case. For this reason, most people turn to plumbers. Knowing the cost of plumbing service could save you a few coins when vetting for plumber’s services. In Goldsboro, the average homeowner paid between $81 and $589, which is slightly below the national average rates.

However, this price is merely an average rate. Many factors can influence the price of plumbing services in the city. They include the material costs, local permits required for plumbing, and the pay rate per hour for plumbers in Goldsboro, North Carolina.

There are the basic factors that affect the cost of plumbing services. First, we have the plumber’s experience, which is one of the biggest factors contributing to plumber pricing. The more experienced the plumbing service provider will charge a bit more for their service.

If there is no independent contractor responsible for on-site dumpsters and removal of debris, the plumber can hike the price to accommodate the setback. To reduce the price, you are advised to provide or specify your price for debris removal if you don’t have access to dumpsters.

The majority of Goldsboro homes are pretty old, and the correction of existing plumbing code violations is quite common in the city. You are required to have a permit before commencing any corrections. This will set you back about $15,000.

It’s not unusual to find old, galvanized metal piping in Goldsboro since most would have been around for over 70 years. This means upgrading the existing piping system, and this can be quite costly considering you still require a permit for this kind of renovations.

Can Better Plumbing Save You Money In Goldsboro?

The city of Goldsboro offers rebates for plumbing materials that are energy-efficient and eco-friendly. Rebates can vary depending on the utility provider, but they mostly range between $10 and $200. You could also apply for an energy tax credit which is around $300 if you are using an energy-efficient water heater.

Technology has dominated the plumbing sector in Goldsboro. With more homes becoming smarter through artificial intelligence, consumers are demanding smart pipes. These are pipes that sense leaks as they happen and even send notifications to your phone. The technology has helped reduce water wastage caused by leaks or drips and plays a huge role in water recycling.

By combining technology and eco-friendly features to your plumbing system, you are guaranteed to save more than just your money. With no more safety hazards or high repair costs associated with water damage, you can live peacefully knowing the house is secure in terms of plumbing.

Utility companies in Goldsboro play a huge role in converting the old plumbing system to the money-saving modern variants through their various kickbacks, which attract more people. In a world getting greener and smarter every day, it makes sense to contribute to the movement while saving money at the same time.

When Should You Call The Water Utility Company In Goldsboro Vs Hire a Plumber?

While most plumbing issues look easy to deal with, they can easily become a disaster. If done incorrectly, they can lead to injuries and property damages that will dig into your pockets even further. To avoid this, it is highly recommended that you consult with the relevant support. This brings us to the question: Who should you call if there is a plumbing issue on your property? Is it the water utility company or a plumber?

Well, it depends on the type of service you need. Listed below are some common scenarios in Goldsboro that will help to know if to call the water utility company or just hire the local plumber in Goldsboro.

There are other instances where you notice a puddle on your driveway, and you suspect the water is from underground pipes. In this case, your first move should be to make sure the water is not coming from your house. To do this, shut off all the water and check on the meter. If it’s still turning, it means that the leak is from your house, and you should call a plumber. Otherwise, if it stops turning, it means that the leak is external, and in this situation, you’ll need to contact the water utility company.

To avoid the safety concerns accompanied by plumbing emergencies, it is recommended you hire a plumber who will regularly maintain the plumbing systems on your property. An inspector will check the water heater, garbage disposal, and the entire plumbing system to avoid expensive disasters associated with plumbing problems.

When Do You Need Permits for Plumbing Service in Goldsboro?

Having a building permit in Goldsboro ensures that the plumbing service is up to code. It ensures that the plumbing service provider is licensed by the state of North Carolina, has the proper permits to practice, and has passed all the relevant inspections. Permits also help in the removal of barriers for approval of loans by many mortgage companies that require code compliance checks before approval.

A building permit is required in Goldsboro for any sort of installation, construction, repair, alteration, or replacement costing more than $15,000 regardless of construction costs. This means you will need a building permit before you could work on upgrading the entire plumbing system.

You are also required to have the permit in case you are adding a sink or water closet or modifying the plumbing system. However, the builders permit is not required for any plumbing equipment or fixture/ fitting replacement which does not change equipment size or system capacity. This includes water and drain lines replacement of the same size.

Homeowners applying for a building permit are required to give information concerning the proposed plumbing works. The information should include: the general overall proposed project description, location of the property to be worked on, the signature of the owner of a licensed agent, and finally, the estimated cost, site work, pay per hour, project contractor, and design professional fees.

With more lenders requesting building permits, more works that were previously completed without a permit are being exposed. If this happens to you, you’ll need to present your system for inspections and pay retroactive permitting fees.

Recent Requests We Received From Customers In Goldsboro, NC

Water is off due to a outside faucet that burst

My water stopped flowing on Monday 2/15 after storm. I turned off the main line. When the weather warmed up on 2/20 I turned the valve back on (faucets slightly open) but no water. No visible leaks anywhere.