Looking for an affordable plumber in Rio Rancho, NM? Great! Mr. Blue Plumbing is at your service 24/7. 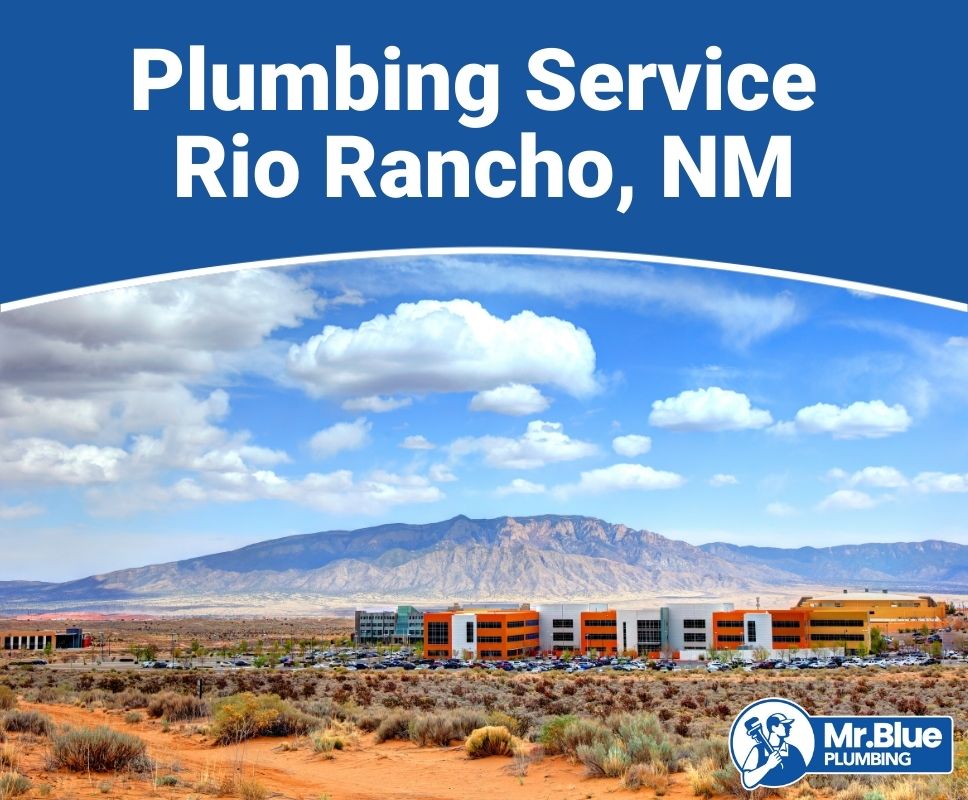 Tell us about your plumbing issue in the form and we'll get you connected with a Mr. Blue Plumbing expert in Rio Rancho today!

What Are the Most Common Plumbing Issues in Rio Rancho?

Most of these older homes have polybutylene pipes, which leads to some of the most common plumbing problems. If you are wondering what polybutylene is, it’s a plastic manufactured around 1978 to mid-1990. Many homeowners opted for this plastic since it was cheaper, quick to install, flexible, and resistant to freezing. During this period, six to ten million homes had polybutylene pipes in their plumbing system all over the US.

After a few years, homeowners in Rio Rancho started experiencing issues such as:

When Rio Rancho residents started experiencing pipe bursts, the first assumption was due to pipes freezing. However, the patterns didn’t quite match the chilly temperatures since the pipes could burst even during other seasons. The pipe bursts emanated from the deterioration of the material in the pipes, which can only last bout 15 years, leading to water damage and flooded houses.

Although our professional plumbers in Rio Rancho can make the necessary repairs on polybutylene pipes, it’s not the ultimate solution. With time, we still get similar complaints from homeowners in these older houses.

We advise property owners to do a repiping in their entire plumbing system. Unfortunately, hundreds if not thousands of homeowners haven’t made replacements, increasing the risks of water damages.

Most of the Rio Rancho homes experience low-water pressure issues. Due to the many cases, we try making some tests to know the root cause of this issue. We found out that restricted pipe diameter was a significant contributor to this problem. The hard water in Rio Rancho exacerbates this issue by leaving mineral deposits on the insides of your pipes.

Shared main water supply lines that serve several homes also lead to low water pressure when many fixtures use water simultaneously. During off-peak hours, some homeowners can even experience elevated pressure. While high water pressure isn’t a significant concern for many, it can also lead to dripping faucets, leaks, broken pipes, and running toilets. It also accelerates the wear and tear on certain appliances such as washing machines, ice makers, and dishwashers.

Homeowners in Cabezon are the most affected by leaks and broken pipes whenever water pressure exceeds 65 pounds per square inch (psi). We have had cases where Cabezon property owners experience up to 150 psi, leading to pipe bursts and flooding in their homes. Some people have installed a pressure regulating valve (PRV) to minimize water pressure from the municipal water supply.

The housing boom between 1995 and 2007 led to the building of thousands of homes in Rio Rancho. During this period, most new homes installed Kitec plumbing fixtures, and despite the recalls in the late 90s, some New Mexico builders still used Kitec products.

Most of the new homeowners in Rio Rancho experience water leak problems, leading to structural damages. We tried tracing the source of the leaks and found that most of them had Kitec fixtures in their plumbing system. In some worse cases, it even led to flooding, and the repairs can cost you at least $20,000. Again, Kitec fixtures were marketed as an easy to install and cheaper alternative.

How Does the Water in Rio Rancho Affect Your Plumbing?

The residents of Rio Rancho get their water supply from 17 groundwater wells. Their drinking water source is entirely from Santa Fe Group Aquifer. It’s also the primary water source for people within the Middle Rio Grande Basin. Consequently, the officials in the city are always committed to protecting the source from contamination and overuse. Water quality is also a significant concern since the Santa Fe Group Aquifer. The contaminant detected in these waters generally falls below the MCL established by EPA.

However, you’ve likely heard the term hard water as a resident of Rio Rancho. While you may overlook this fact, it’s one of the factors that cause a significant deterioration in your plumbing system. In fact, the available water in the entire New Mexico ranges from hard to very hard. According to the USGS water hardness level, we can safely say that Rio Rancho has hard water since it has 150 PPM.

The smell and taste of the water are the first clues that you have hard water in Rio Rancho and the surrounding areas. Some homeowners in Rio Rancho describe their water as having a dirty flavor with a funny smell. Additionally, when water evaporates, you will notice calcium deposits. While you may cope with these challenges, the biggest casualty will be your plumbing system.

Our plumbers in Rio Rancho also get several calls to sort out clogged showerheads, which is an indicative sign of clogged pipes. Clogged pipes lead to weak water pressure problems, and as more calcium and magnesium deposits continue building up in the pipes, you will also have to deal with corrosion. Since the water in Rio Rancho comes from groundwater and aquifers, the small amounts of naturally occurring minerals can quickly dissolve into the water as it moves through soil and rocks.

How Much Does Plumbing Usually Cost in Rio Rancho?

According to the research we have done on the plumbing repairs costs in Rio Rancho, you will pay an average of $390. Various factors come into play while determining the final price, which can be as low as $90 or as high as $700.

Here are some factors that bring in the difference:

For homeowners in Rio Rancho older homes, a leak in your system might be due to the type of pipes used. If you want a repiping of your system, you will have to pay an extra amount for the materials used, equipment, and time spent on the entire project.

Cost Factor: Nature of the Project

Some plumbing problems are in hard-to-reach areas, such as behind walls and under floors. Our professional plumbers in Rio Rancho will have to drill through these areas, use special tools to make repairs, and clean up the mess. You will add more money to the total cost for surface preparation, machinery, and cleanup fees.

If you only need a change of faucets or a pipe repair beneath your sink, you will pay less since it takes few minutes and it’s less tedious. However, repairs covering a more extensive area require more labor, which adds to your total costs.

Can Better Plumbing Save You Money in Rio Rancho?

Water is a precious commodity in Rio Rancho, and homeowners have the responsibility to conserve this source. The city of Rio Rancho Water Conservation Office will even reward you on your water bill for using an approved high-efficiency washer, being WaterSense compliant, and more. Residents trading from water-guzzling washers to a higher efficiency one can claim a rebate.

That said, hiring our quality plumbing services in Rio Rancho will save you money. Our Rio Rancho plumbers take a careful and holistic approach to any plumbing issue to ensure proper diagnosis and repair. In addition, although the hard water in this area is a catalyst for potential plumbing problems, you can make the following changes to save you from hefty repairs:

Calcium build-up should be a primary concern in your plumbing system as it leads to corrosion. A water softener can prevent this build-up in the whole plumbing system. While it’s easier to notice the effects of hard water on shower doors or faucets, the pipes under your floors and behind walls remain unseen. Once these hidden areas become problematic, they turn out to be the most expensive. Installing a water softener eliminates the minerals that lead to hard water build-ups. It also prolongs your plumbing system and prevents drain backups in your property. You will also avoid constant repairs and replacements of various fixtures.

Know the Type of Pipes You Have

We noted that some homeowners in Rio Rancho are unaware of the pipe types in their plumbing system. Others are not willing to do an entire replacement as they see it as an expensive project. However, you will save more in the long run with better piping, and you will not experience constant plumbing problems.

Therefore, if you still have Kitec or polybutylene piping, make sure you call us to replace them as soon as possible. Both piping types easily break, leaving the property owner with water damages and repairs, which is a considerable expense. Keeping in mind the constant water pressure fluctuations in Rio Rancho, the polybutylene pipes can easily lead to a water hammer, causing cracks throughout the system.

When Should You Call the Water Utility Company in Rio Rancho vs. Hire a Plumber?

Water conservation practices are a priority in Rio Rancho. If you spot a water main leak, call the city repair crews immediately. The officials report as soon as possible to avoid excess water loss, which can easily lead to disruptions to city residents.

When Do You Need Permits for Plumbing Service in Rio Rancho?

Before making any repairs, replacements, or maintenance on your plumbing system, you must have a permit per section NMAC section 14.5.2.8. We always advise homeowners to contact the permit office via 505-891-5005 to avoid being on the wrong side of the law. Even when conducting minor repairs and remodel works, you must have a permit. Failure to comply with the building codes ordinance leads to a double fee.

Recent Requests We Received From Customers In Rio Rancho, NM

I need information and pricing to installo a water softener system

i have a clogged kitchen drain

The kitchen does not produce hot water, the fireplace doesn't turn on, and one of the bathtubs needs a faucet fixture.