Looking for an affordable plumber in Buffalo, NY? Great! Mr. Blue Plumbing is at your service 24/7. 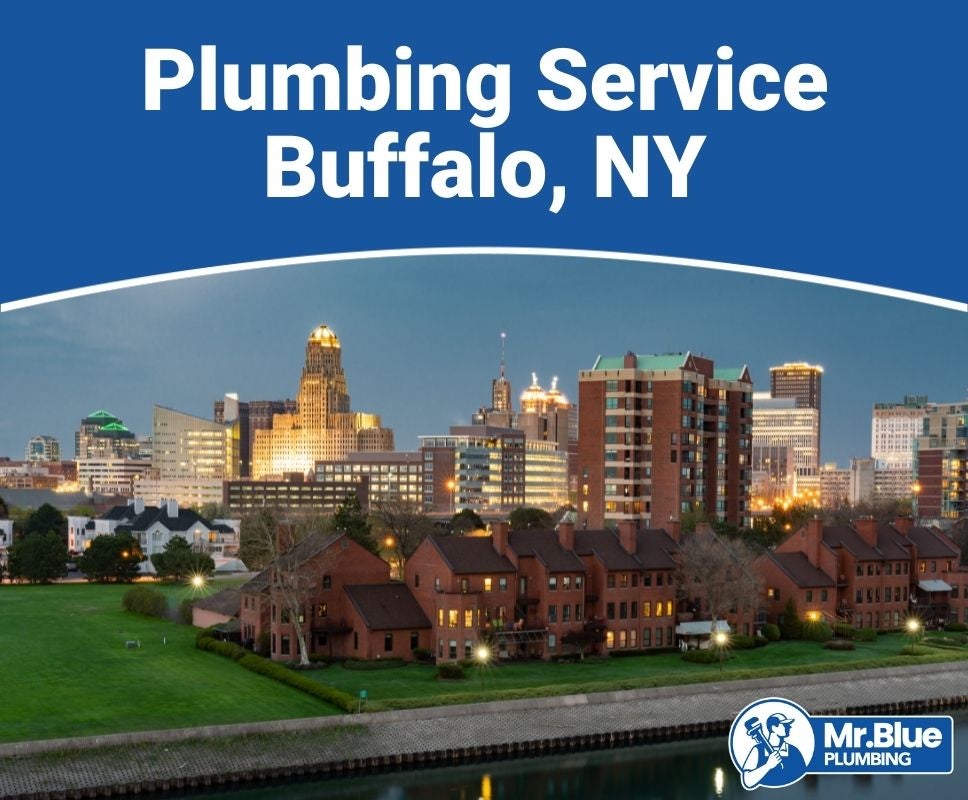 Tell us about your plumbing issue in the form and we'll get you connected with a Mr. Blue Plumbing expert in Buffalo today!

What Are the Most Common Plumbing Issues in Buffalo?

Overall, plumbing problems in Buffalo aren’t too severe. Residents typically call us out for things like unclogging drains, leaky faucets, malfunctioning water heaters, and similar everyday issues. Rusted sewer lines in older neighborhoods might also be an issue sometimes, though the city is working to correct this problem on its own. Beyond that, we might also be called in to replace someone’s fixtures for them if something’s broken on their sink, toilet, or the like.

A few years back, the Southtowns reported low water pressure during the winter. This was found to be the result of Lake Erie not having frozen as it normally would during the season, inhibiting proper flow into the treatment plant. While this problem was fixed and has so far not been a recurring issue, a failure to manage this or similar issues could easily lead to this happening again. In general, the Southtowns is where low pressure is found in the city under normal circumstances due to its hillier topography compared to the rest of the city.

How Does the Water in Buffalo Affect Your Plumbing?

As explained in the water quality report from Buffalo Water, Buffalo’s water primarily comes from Lake Erie. As the report details, Lake Erie is unique among the Great Lakes, replacing its water via the water cycle much more quickly than the other lakes. The saltiness of the lake’s bottom also helps in filtering out contaminants, meaning that the water taken from it and subsequently used in Buffalo is fairly clean even before treatment.

To ensure the water in Buffalo is safe to drink, the city uses a few different additives during treatment. Chlorine and fluoride are added to the water like in most places, the former disinfecting the water and the latter being used as a means of promoting public health. Beyond that, poly-aluminum chloride (PACl) is mixed with the water to help remove debris, coagulating the liquid so that solids bind together for easy removal. After the initial treatment, corrosion inhibitors are also added into the water to help protect the pipes in the city and prevent the leaching of metals into the water as it’s used.

Hard water is still an issue for the people of Buffalo, however. The city is rated as having 118 PPM, which means it’s designated as “hard” by the USGS. This is significantly higher than the average for New York of 62 PPM. While hard water isn’t too harmful to humans, it can be pretty devastating to your pipes if not treated. As mentioned earlier, untreated hard water can cause scale to build up inside pipes and other fixtures as well as around taps. This isn’t just gross to look at but potentially damaging to the pipes themselves, not to mention the cause of issues like low water pressure and poor taste.

None of the common contaminants found in Buffalo drinking water are particularly harmful to your plumbing systems. Among the potential contaminants, nitrates from farming runoff are the most prevalent, though nowhere near dangerous levels based on the water quality report. Metals leached from older pipes or septic tanks can also be a problem, though the corrosion inhibitors are one of many ways in which the city is trying to deal with those problems before they happen. As a result, the average water you get from the tap is entirely safe to drink and largely free of rust and other substances.

How Much Does Plumbing Usually Cost in Buffalo?

Plumbing calls in Buffalo usually cost about $70.29 per hour with a price range of $65.86 to $74.72 per hour. In 2021, homeowners paid an average of $491 for plumbing and $388 for plumbing installation in Buffalo, NY. While this is the baseline of what you can expect to pay, different factors can change how much your bill actually turns out to be. Some of these cost factors are listed here and include:

Calling in an emergency plumbing visit tends to cost more than routine work. As you might expect, getting someone prepped and ready on short notice is a lot more disruptive to people’s schedules than setting an appointment. This is especially true for holidays, weekends, and after-hours calls. Expect to be on the hook for some extra fees if you call us in on an emergency job, and try to use it as a reminder to maintain your pipes better so it doesn’t happen again.

Unclogging your toilet usually isn’t that big of a deal. Replacing half the pipes in your house, though, is something else. That’s going to require a ton of materials, permits, and working hours to do right. In addition to paying more overall just from how long a job might take, more complex work will typically carry with fees for materials and permit application fees. Generally, the bigger the scope of your project, the bigger the price tag.

Costs don’t just go in one direction. In some cases, you might even have opportunities to pay less on your bill. Certain local, state, and federal programs provide financial assistance to homeowners looking to improve their houses. Depending upon what needs to be done and your eligibility, you might be able to get a grant or loan that takes care of your plumbing bill entirely.

Can Better Plumbing Save You Money in Buffalo?

Better plumbing will definitely save you money. While forgetting about that leaky faucet or weird noises in the pipes might save you plumbing cost upfront, you’ll be regretting that stinginess once something more serious happens. Preventive maintenance is integral to good performance, especially with your plumbing systems. Finding problems like leaks, damage, scale buildup, and more early on stop them from becoming significantly worse due to neglect.

Even with our leaky faucet example, you could be wasting up to 3,000 gallons of water per year from just a small drip. That’s not really saving any money, now is it? A hot water tank that’s totally crusted up with scale is a much worse outcome than just less hot water, too. These and plenty of other problems are all things you need to catch quickly, otherwise, you risk a much bigger problem and a much bigger bill to have it fixed.

When Should You Call the Water Utility Company in Buffalo Vs Hire a Plumber?

It’s not always clear-cut on who you should call when plumbing issues arise. While your instinct might be to phone us immediately, sometimes you might be better off calling your water utility company. But why might that be?

To explain it simply, we are here to help when a problem affects you specifically, while the city is responsible for problems that affect multiple homes. Does your toilet get clogged? That’s us. Does water get shut off for the whole block? That’s the city.

Obviously, it’s not always so easy to tell the scope of an issue at just a glance. Do you not have water because something’s blocked your drain or because a connecting pipe broke somewhere along the way? To learn more about plumbing issues before you give someone a call, test different faucets and drains in your home to see if the issue persists beyond a single source. Ask your neighbors how their pipes are doing, too, as it’s much more likely to be a city problem if multiple homes on your street are facing the same issues.

Lastly, if you see something going on with someone else’s property, you might want to call the utility company as a precaution. This would include things like a fire hydrant busting open or an empty house flooding. Depending on the problem, we might not be equipped to handle it or even be able to legally do so, particularly if the city owns whatever is causing the problem. Getting the city to shut off the water to a particular area and send a crew out is best for these kinds of issues.

When Do You Need Permits for Plumbing Service in Buffalo?

Buffalo has a whole page on the city website detailing when a plumbing permit is not required to do work. To summarize, plumbing services that don’t require us to remove or replace anything won’t require a permit. This would be things like unclogging drains, flushing them out, patching leaks, etc. We can also replace things like faucets, flushing mechanisms, fill valves, and similar things. We can also cut out and replace pipes provided they’re limited to the water distribution system in a home and don’t exceed 20 feet in length. Anything beyond the scope of this will generally need to go by the city, which means fees, fees, fees.

There’s also some bad news for any DIY experts out there, as the city prohibits anyone but a master plumber like us from obtaining a plumbing permit. That means getting a license and various other things if you’re intending to gut your house and replace your pipes. Just one of many reasons why you should leave the heavy lifting to us.

Recent Requests We Received From Customers In Buffalo, NY

I have pipes in the crawl space above my house that are leaking since the freeze.

Broken pipe under kitchen sink, flooding kitchen. Water has been turned off.

my pipes burst on second floor, which led to flooding on first floor downstairs.

What is cost to unclog a toilet!