Looking for an affordable plumber in Ithaca, NY? Great! Mr. Blue Plumbing is at your service 24/7. 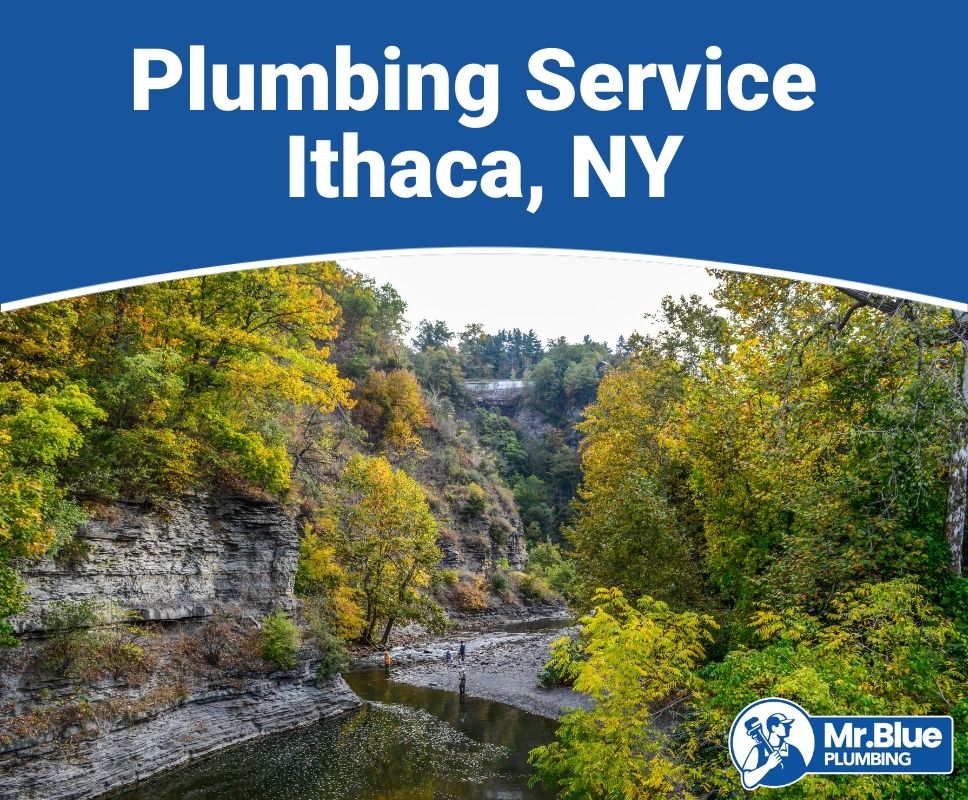 Tell us about your plumbing issue in the form and we'll get you connected with a Mr. Blue Plumbing expert in Ithaca today!

What Are the Most Common Plumbing Issues in Ithaca?

Given the age of some areas of Ithaca, older plumbing systems breaking down can be an issue for residents. Having been founded back in 1790, this isn’t exactly a surprise, especially in places like East Hill or the neighboring Dryden Historic District. Pipe corrosion can leech various metals and contaminants into water, contributing to illness in humans and the physical breakdown of a home’s plumbing infrastructure. Depending on where a pipe breaks from this kind of issue, you could see your home’s water getting dirtier, causing more scale buildup around the tap or in the water heater, or even lose water entirely.

Severe thunderstorms and flooding are both a possibility in Ithaca and can lead to damaged or overflowing pipes. If you live on high ground, you’re less likely to have to deal with these issues, but taking precautions is still a good move. Though rare, tropical storms and tornados can carry similar risks of damage, which obviously extend from just your pipes and/or basement to all your property. Melting snow and ice during winter can also cause issues, with Ithaca having the potential for flash freezes that can harm pipes. Burst pipes due to cold weather is also a problem given how cold New York gets.

More mundane problems are also a fact of life for Ithaca residents. Clogged drains, leaking taps, a lack of hot water, and similar issues that we can easily handle crop up from time to time as you would expect. If a building’s pipes have been neglected, we may need to flush the system to eliminate scale and buildup, though this is unlikely given the relative softness of Ithaca’s water. You’re more likely to see corrosion of the inside tank over time, necessitating replacement.

How Does the Water in Ithaca Affect Your Plumbing?

The water in Ithaca is sourced from Six Mile Creek. To make it safe for human use, some additives are used to remove impurities and disinfect the water. These include oxidants that kill microorganisms, chlorine to prevent bacteria growth, and corrosion inhibitor to protect pipes from rusting. None of these products and other contaminants like runoff are harmful to humans at the levels in which they’re found in the drinking water, with things like the corrosion inhibitors even working to prevent plumbing issues for Ithaca residents.

Ithaca’s water hardness is about standard for the State of New York, averaging at only 65 parts per million (ppm). According to the US Geological Survey, this makes Ithaca’s water “moderately hard.” This is good news for your pipes, as softer water is less likely to produce scale buildup and damage. This doesn’t mean you’re totally in the clear (moderately hard still means there are grains in your gallons), but you’ll be much less likely to stumble into serious plumbing issues due to hard water so long as you’re vigilant and treat your pipes right.

The main contaminants in Ithaca’s water are lead and copper traced back to the breakdown of older pipes. As mentioned, however, the city takes steps to prevent this by introducing chemical additives to water that slow the breakdown of pipes and reduce the metal contamination as a result. Sodium is also a concern for some residents, though generally not harmful to pipes, as Ithaca’s water is somewhat salty (38 mg/L) and may be unsafe for people on sodium-restrictive diets to consume. Manganese can also be found in the water during the warmer months, though it is similarly treated and would not cause issues much worse than strange-colored water and stains on plumbing fixtures if left untreated.

How Much Does Plumbing Usually Cost in Ithaca?

The cost of plumbing services will vary depending on the job. This is true for just about anywhere, Ithaca included. While the average cost of a plumbing visit in Ithaca is about $368 (ranging between $103 to $744), certain factors can influence the cost, such as:

In general, the cost of a plumbing visit (at least the estimate) won’t include any additional costs for inspection fees or permit application fees charged by the city. While we’d be the ones handling all of this to save you the trouble and confusion that might come with wrestling through the red tape, it may mean some additional charges on your bill at the end of the day.

It should come as no surprise that a rush job costs something extra. If you need emergency work done, we’ll have to charge more for it given the kind of time required to drop everything to attend to your problems. This also applies to after-hours or holiday work, as this puts our people out in the field beyond normal business hours. Let this act as a reminder to take care of your plumbing problems before they get this serious, otherwise, you’ll have to take the financial hit of an emergency call at 3:00 a.m. if your basement floods.

Like we’ve mentioned before, our plumbers have a very diverse number of things they can do. As the sample cost estimates detailed, your average house call could see you paying as low as a hundred dollars or as high as several thousand depending on what you actually need us to do. Unclogging a drain might be pretty quick and easy, but replacing most of the pipes in and around your home is a different story. That latter example also touches on the factor of materials, as you are responsible for paying for any new pipes or equipment needed to finish the job.

Can Better Plumbing Save You Money in Ithaca?

Better plumbing care has the potential to save you tons of money in the long term. By finding problems early, you prevent them from becoming more serious and costing you a small fortune to repair. While we’re always happy to hear that someone has been doing their own preventative maintenance and checks on their equipment, calling in our professional plumbers is a great way to ensure your pipes really are in working order. This is especially important if you occupy one of those Ithaca older homes, as vintage pipes are a lot more susceptible to damage.

We can even help you save in ways beyond maintenance. Most homeowners have at least a few ways in which they’re flushing their cash with their current plumbing fixtures and setup, so it’s always a smart move to fix that. We can locate the source of issues like a leaky faucet, low water pressure, and more that drive you batty and waste your money. We’ve also got plenty of tips on how to lower your water bill and use your resources more efficiently, so don’t hesitate to ask.

When Should You Call the Water Utility Company in Ithaca Vs Hire a Plumber?

Deciding when to call our plumbers versus calling the water company isn’t always as obvious as it might seem. For the smaller things like figuring out who can take care of your clogged toilet, that isn’t too hard to figure out. What about when your water is off completely, though? Is it a problem with one of your pipes, or is the city having issues at a treatment plant?

This is actually a great example to illustrate the different situations for this question. In general, our plumbers can handle problems that happen at your property, while the water utility company takes care of things city-wide. A single burst pipe flooding your basement is something we can handle, but a fire hydrant gushing into the street isn’t really our jurisdiction.

That brings us to the important question: How do you identify whether it’s your problem or a city problem? Again, some things might be obvious, but that isn’t universal. Maybe your water stopped because one of your pipes is blocked, or maybe it’s been shut off for safety reasons by the city. To find out in situations like this, try calling the city or the utility company first before you call us, so you do not waste your money on a problem that we can’t fix. You can also try asking around the neighborhood to see if anyone else is having your problem. If your shower’s water pressure has gone down recently, that could be a problem with your pipes, but if it’s affecting the whole block, there’s probably something more serious going on below your feet.

When Do You Need Permits for Plumbing Service in Ithaca?

Based on Ithaca’s publicly available building permit information, plumbing services don’t require a permit as long as they don’t involve “installation, enlargement, alteration, relocation, or extension of electrical or plumbing systems.” Basically, as long as you’re not putting anything in, taking anything out, moving anything around, or making anything bigger or smaller, you won’t have to get a permit for the work we do.

As an example, we’re perfectly capable of snaking a drain without going through the city first. We can also patch leaks in pipes or existing fixtures like toilets. We can’t, however, start digging up the yard to make alterations to pipes leading to the sewer. Additionally, a permit would be required even for smaller jobs if they’re carried out in a historic district or a landmark, so be upfront about that during your call.

Recent Requests We Received From Customers In Ithaca, NY

We currently have a well with multiple tanks for chlorine, alum and a culligan tank monthly, trying to make it easier no Sulphur smell and little maintenance.

We need an old septic replaced. I believe it's a standard 1000 gallon tank.

I need my septic tank replaced. My house is four bedrooms. I also need an estimate for insurance purposes.