Looking for an affordable plumber in Rapid City, SD? Great! Mr. Blue Plumbing is at your service 24/7. 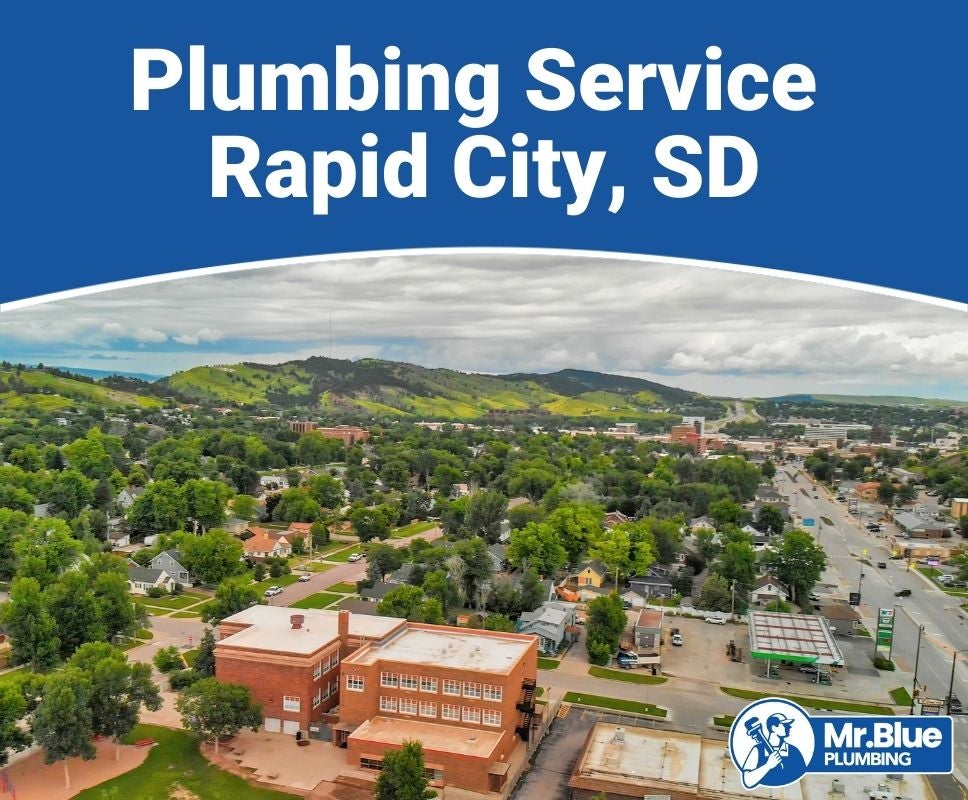 Tell us about your plumbing issue in the form and we'll get you connected with a Mr. Blue Plumbing expert in Rapid City today!

What Are the Most Common Plumbing Issues in Rapid City?

Rapid City has its fair share of plumbing issues, mostly due to temperature fluctuations and weather changes. The Weather Forecast Office issues around 300 yearly warnings whenever they detect potential thunderstorms and tornadoes. Temperature fluctuations are also a common phenomenon. The most noticeable fluctuations occurred in the morning hours of January 22, 1943, in Rapid City, Lead, and Spearfish. Temperatures were at minus four degrees at sunrise, and then a freakish chinook wind began blowing shortly after dawn. In two minutes, the temperatures rose to 45 degrees Fahrenheit, a difference of about 50 degrees, the fastest temperature change globally.

Here are the common plumbing issues we have handled in Rapid City:

Rapid City officials have been running a campaign urging the residents to be kind to their pipes due to the constant sewer backups. The authorities point out the sink and the toilet as the primary source of sewer backups due to improper usage.

Most of the sewer backup issues in Rapid City can be traced back to flushing non-disposable products and disposable rags, wipes, tampons, among other heavy products. We advise homeowners only to flush down toilet paper to avoid constant sewer backups. On the other hand, you should also avoid pouring oils, grease, and fats into your kitchen sinks. With time, these items can cause a clog down the drain in your sewer pipes, leading to backups and overflows. Backups and overflows do not only lead to costly repairs to the homeowners but also the city.

In 2020, the water reclamation facility workers in Rapid City removed about 2,900 tons of solids in wastewater streams. Even worse, they found a pumpkin in the pipes, which clearly shows the carelessness and neglect of Rapid City residents on the items that go down their drains.

We have also seen that some Rapid City homeowners don’t also pay attention to the sewer vent pipe. Yet, this pipe vent can also freeze, allowing sewer gas into your property, resulting in slow draining lines. Therefore, we recommend that you keep a close eye on the vent pipes to prevent frost buildup. During the chilly season, make sure you regularly clear your roof off the snow to avoid blocking the vent’s stack leading to a freeze. You can also keep the attic heated up to maintain warm airflow.

The average unaccountable water loss in public systems accounts for about 16%, per the American Water Works Association. Rapid City Public Works Department estimates to have lost almost 300 gallons a minute in a water leak that went undetected for years. It was not until a company bought property near Highway 44 and East St. Patrick in Rapid city that the surveyors discovered a larger than average leak.

In Rapid City, water leak problem can be due to extreme temperature changes making the pipes expand and contract that can lead to cracks on pipes. If you notice any sign of a possible water leak in your home, seek assistance from our professional plumbers in Rapid City. While some leaks may be easily detected, such as in your cabinets, the pipes behind your walls and underground your yard can go undetected for a long time. Therefore our experts can consider using infrared to acoustic test on your floors, walls, and other major appliances to determine the exact nature of your plumbing leak.

We noted that mobile homes are particularly prone to the risk of frozen pipes. Generally, mobile homes are off the ground for more effortless movement. However, the water pipes and drains in these homes run under the trailer. As a result, when we get the extremely cold snaps, the pipes are exposed to elements of cold which can quickly freeze the water and even lead to a pipe burst. If you live in a mobile home around Rapid City, we advise you to use heat cables to keep the pipes from freezing. Ensure that you have them in place before the onset of the cold season, or ask for assistance from our plumbers in Rapid City if you doubt your preparedness.

Still, homeowners in older homes within Rapid City often suffer from freezing pipe problems due to the poor circulation of warm air. You can leave your kitchen cabinets a little bit open in older homes to let in some heat. If you plan to go away for some time, leave the thermostat set at least 55 degrees.

How Does the Water in Rapid City Affect Your Plumbing?

The Water Division in Rapid City is determined to deliver clean water in adequate supplies that meet federal and state drinking water regulations. Rapid City has the softest water compared to other cities within South Dakota, with a water hardness of 207 PPM. However, this level is also regarded as very hard water according to USGS.

Hard water leads to various problems in your home or business’s plumbing system. Ugly spots will be visible on plumbing fixtures and in tubs and sinks. On the inside of your pipes, hard water causes a buildup which can eventually lead to decreased water pressure and the formation of clogs. With time, you will ultimately need to replace the pipes.

How Much Does Plumbing Usually Cost in Rapid City?

Most plumbing repairs are usually complicated because a large part of your system is hidden. If you are in an older home in Rapid City, it can be even more challenging since the plumbing system may not be up to date. As a result, you need a skilled and licensed plumber like Mr. Blue Plumbing who won’t compromise the quality of your plumbing system. Most of the Rapid City, SD residents pay an average of about $412 for our plumbing services. The expenses can go as high as $750 to a minimum of $100.

Some of the factors that contribute to the pricing difference include:

Some plumbing repair services require more tools than others. For instance, an apparent water leak will most likely need just a few tools since the leak is evident. However, if the leak is behind walls, floors, or in the garden we will need leak detection items to determine the exact position of the leak. The estimated leak detection cost in Rapid City is about $186 on average.

When you seek out outprofessional plumbing services, our plumber will most likely conduct a thorough assessment to identify the source of the problem. If the evaluation gets more complicated, our plumber will have to make some openings in the floors, ceilings, and walls. You will have to pay more for the extra labor and time required to better evaluate the drains and pipes.

Cost Factor: Nature of the Service

If the plumbing issue is in your yard or porch, it will probably require specialized equipment to dig out the area, adding more costs. However, just one of our master plumbers can repair a pipe break below your sink in a few minutes.

Can Better Plumbing Save You Money in Rapid City?

No one wants to spend too much on plumbing repairs in Rapid City. Most of the homeowners we interact with are particularly frustrated by repetitive plumbing repairs on the same problems. With our quality plumbing services, you can save money in the long term at home and on your business premises.

The first step in better plumbing is to make sure you work with our fully licensed plumbers like Mr. Blue Plumbing. This way, you can rest easy knowing we will do a thorough job. For instance, we will inspect your toilet for proper flushing, flow, and leaks which are not easy to identify, and only a professional like ours can spot these issues quickly.

Our professional plumbers will also advise you on the best appliances that will save your water bills. For instance, you can update your toilet with eco-friendly WaterSense labeled models that save water by 20% to 60%. You can also update your faucets to adjust the amount of water passing through them, which reduces your utility bill.

When Should You Call the Water Utility Company in Rapid City vs Hire a Plumber?

Our professional plumbers in Rapid City can solve a majority of plumbing problems for the residents in this area. However, there are some instances where you can still call the Rapid City water utility company. The city’s plumbing code requires homeowners to take care of damages on their homes’ plumbing system, including the service lines running from the water stop on their property. However, if the issue is within the city’s water main line beyond your property, the water utility company will take care of the mess.

When Do You Need Permits for Plumbing Service in Rapid City?

The Plumbing Commission is committed to ensuring that its citizens and their property are safe. Therefore, the commission must investigate plumbing complaints within the state, inspect any plumbing installation, and issue a license to qualified plumbers. They also ensure that plumbing codes within the state are up to date and formulates the state’s laws and regulations regarding plumbing.

Still, homeowners need to obtain licenses from the department of labor and regulation for plumbing services. As a business owner, you must have a plumbing permit before any installation in a commercial building. However, homeowners can still make installations without a permit, provided it’s in their present residence.

Recent Requests We Received From Customers In Rapid City, SD

leak in front yard, we know where leak is located near our water shutoff box. Is it possible to get a plumber here today?

Shower and toilets will not drain

There is no hot water in one shower only. All other sinks and shower have got water.

Need a 100lb grease trap installed for a small bakery outside of the building. Thanks