States & Cities with the Largest Need for Plumbers

Looking for data on where the biggest demand and shortage of plumbers is in the United States? Great! You’re in the right place! For this campaign, the Mr. Blue Plumbing Team analyzed search engine data and labor statistics to: 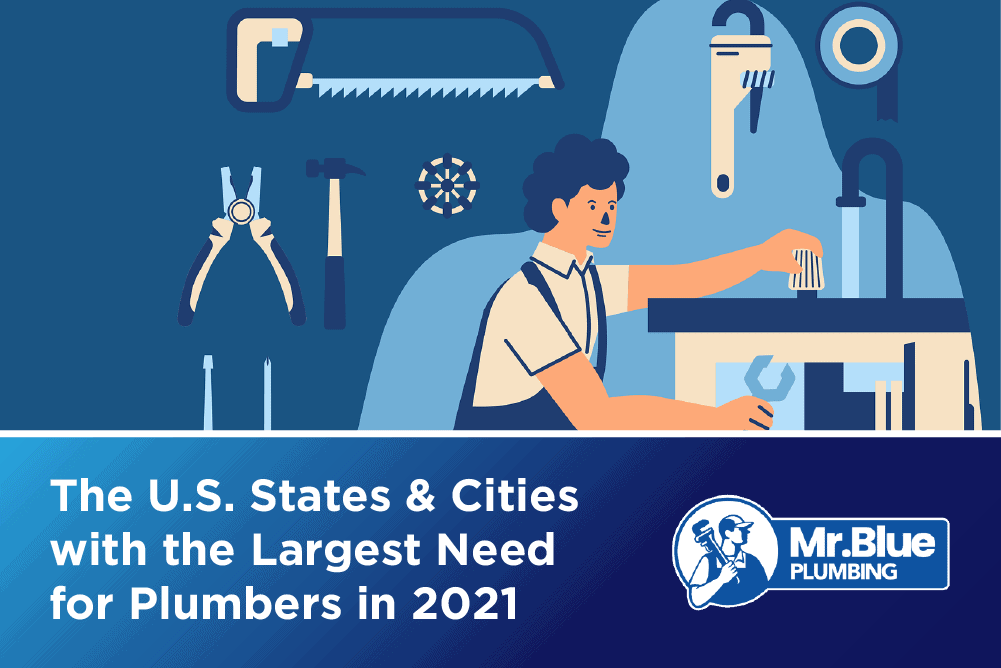 As the U.S. economy faces a widespread worker shortage, plumbers appear to be in exceptionally high demand but short supply. In fact, the National Homebuilder’s Association’s Spring 2021 Construction Market Report found a stunning 55% shortage of plumbers available for work.

This is unfortunate news for homeowners in many areas throughout the country as they struggle to get necessary plumbing work completed. However, it’s also a unique opportunity for aspiring plumbers and those in trade school to get into the industry and offer their services.

In order to find out where the most prominent need for our fellow plumbers exists in the United States, the Mr. Blue Plumbing team analyzed Google Trends and Bureau of Labor Statistics data. We compared searches for “plumber near me” and employment level of plumbers on a city and statewide basis to determine the locations with the greatest need for plumbers.

To establish where plumbing jobs are in the shortest supply, we pulled extensive data from the Bureau of Labor Statistics to determine the ratio of plumbing careers to non-plumbing careers. This information provided insight into what percentage of the population worked in plumbing rather than how many plumbers lived in a given city. This allowed us to control for population differences between cities.

Finally, these two sets of data were compared with weighted scores to find the cities and states with the highest demand for plumbing work and the most significant shortage of plumbers.

The States With the Highest Demand for Plumbers

When it comes to search engine queries for plumbers in the area, Texas and Georgia are unrivaled in frequency. These two states are tied for the most local searches for plumbing, correlating to the highest demand for plumbing services in the country. Using our search frequency scoring method, they scored 100/100 for demand.

We found that the lowest demand for plumbing services overall was in Alaska, North Dakota, South Dakota, and Wyoming. These four states were tied with a score of 0/100, indicating that the demand for plumbers based on search engine queries is extremely low.

The U.S. Metropolitan Areas With the Greatest Demand for Plumbers

Next, we looked at the search frequency for plumbers in metro areas throughout the United States to determine where a high population was met with high demand and low supply, indicating a particularly high need for plumbing services.

Sherman, TX and Ada, OK both showed the highest frequency of searches for local plumbers by far with a score of 74/100, nearly 20 points higher than the second-highest scoring metro area. This suggests that Sherman and Ada might be the ideal places for aspiring plumbers to settle into, with a massive population and an overall high demand for service.

Among the metro areas with the lowest demand for plumbing services were Corpus Christi, TX and Augusta, GA, both tied with a meager 28/100.

Only four other metropolitan areas scored below 30: Indianapolis, IN, Cincinnati, OH, Denver, CO, and Oklahoma City, OK, all with a 29/100.

Supply of Plumbers by U.S. State

To determine how severe the shortage of plumbers is in each U.S. state, we used a score of individuals with a plumbing career per 100,000 people to control for population differences.

The most significant shortage of plumbers per capita exists in West Virginia, where only 61.88 of every 100,000 residents holds a career in plumbing. The next most considerable shortage is in New Jersey, which scored an 89.25.

Only four other states — Georgia, Mississippi, Idaho, and Ohio scored below 100, indicating that less than 0.001% of the population in these states works in the plumbing industry.

Supply of Plumbers by Metropolitan Area

Metropolitan areas naturally have a significantly higher population density than suburbs and rural settings. As such, the overall demand for plumbers in metro areas is higher. We’ve controlled for population by determining the number of individuals with a plumbing career compared to the population.

Cleveland-Akron (Canton), OH is the metro area with the fewest plumbers per capita, with just 30.65 plumbing professionals for every 100,000 people. Plumbers in this metro area earn an average of $52,650 per year, which is just under the national average for plumbers. As such, the Cleveland-Akron area might present a good opportunity for aspiring plumbers.

Albany, GA and Johnstown-Altoona, PA are the only other metro areas under 50 plumbers per 100,000 people. Plumbers in these areas earn $45,860 and $50,920 on average, respectively. Both are more than 10% below the national average, which may explain the lower concentration of plumbers per capita.

The metro area with the most plumbers per 100,000 people is Charleston, SC, coming in at 95.04. Only five other metros hit over 90 plumbers: Myrtle Beach-Conway-North Myrtle Beach, SC, Savannah, GA, Memphis, TN, Charleston-Huntington, WV, and Greenville-Anderson-Mauldin, SC.

Top U.S. States With a Demand for Plumbers

When comparing our data for states with a high search volume for local plumbers with our data set regarding areas with a low number of plumbers per capita, we’re able to identify where the highest concentration of demand for plumbing services is in the country.

Two states, in particular, have a severe shortage. Georgia, the state with the highest demand to availability ratio, scored a -10.75. Idaho also shows a severe lack of supply for the plumbing demand with a score of -5.65.

West Virginia, Delaware, and Mississippi make up the remaining states with a score under 20, also suggesting high demand and a relatively low supply of professional plumbers. They scored 10.88, 12.11, and 14.49, respectively.

Top Metro Areas With a Demand for Plumbers

Finally, we used the same logic as above to determine where the supply of plumbers falls short of demand in major metropolitan areas throughout the United States.

Just two metro areas scored below 0, indicating a significant shortage of plumbers as compared to demand: Albany, GA with a score of -9.43, and Shreveport, LA, scoring -0.25. Georgia is also the state with the largest overall shortage of plumbers, making Albany and the surrounding areas a particular hotspot for plumbing opportunities.

Cleveland-Akron (Canton), OH is the only other metro area with a score under 20, coming in at 3.65. The next metro, Johnstown-Altoona, PA, scored much higher at 28.46.

There are many studies and data sets available online that detail where plumbers are in short supply based on population. However, most don’t also account for demand. We’ve compared data from the Bureau of Labor Statistics regarding plumbers per capita in states and metro areas throughout the U.S. with data from Google Trends on how often residents search for local plumbers.

We’ve identified that Georgia appears to hold the greatest opportunity for aspiring plumbers or those who are relocating. The state as a whole has the most significant discrepancy between supply and demand, and Albany, GA is also the metro area with the most severe shortage. The average plumber salary in Georgia is only slightly below the national average.

Idaho also has a short supply of plumbers and a relatively high demand for plumbing services. However, the average plumber’s salary is about 20% lower than the national average, coming in at $48,840.

Other areas that show the greatest potential for opportunities for plumbing professionals include Shreveport, LA, and the Cleveland-Akron area in Ohio. Plumbers in these areas earn an average of $54,250 and $52,650, respectively.

Our team at Mr. Blue Plumbing is always committed to bringing high-quality service and customer satisfaction to our customers, even in areas where there is a severe lack of plumbing services available. If you need our decades of experience and unparalleled plumbing expertise, fill out our contact form, and our experts will reach out to you right away. With our rapid response times, you’ll never know there’s a plumber shortage!

I've been helping folks with plumbing issues ever since I can remember. Some folks may think it's a dirty job, but I love it. MrBluePlumbing is all about helping folks find what they need to make their plumbing problems go away for good.
More Plumbing Guides