Looking for an affordable plumber in Sugar Land, TX? Great! Mr. Blue Plumbing is at your service 24/7. 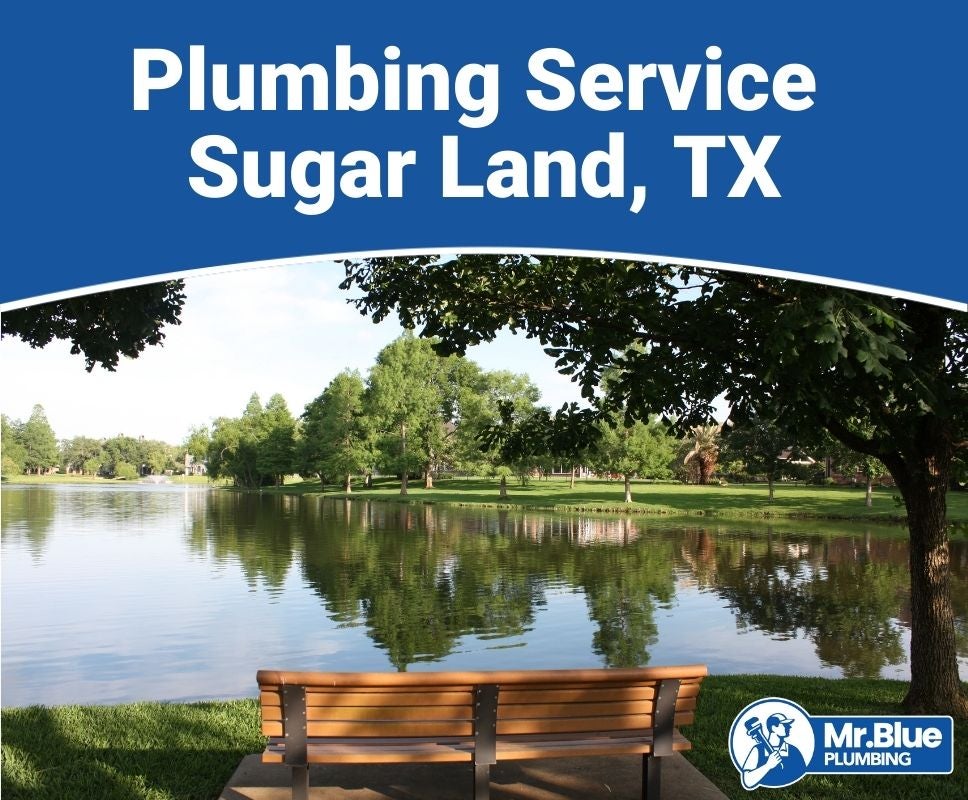 Tell us about your plumbing issue in the form and we'll get you connected with a Mr. Blue Plumbing expert in Sugar Land today!

What Are the Most Common Plumbing Issues in Sugar Land?

As mentioned, Sugar Land’s communities comprise old and new homes, with some dating back to the early 1900s. According to Neighborhood Scout, a community such as First Colony has homes built in the mid-1900s, while Greatwood, Four Corners, and Town West’s oldest homes were constructed from 1970. Most of the neighborhoods have new homes, too, and more continue to come up. In our many calls, we have come across all kinds of plumbing issues, but the most common include:

Running toilets are a relatively common plumbing complaint we receive from our customers. Common causes are issues such as maligned float ball, worn-out flapper seal, or mineral build up from the city’s hard water causing leaking. While some problems are pretty obvious, such as a malfunctioning handle, toilet leaks go unnoticed in most cases. Unfortunately, this leads to massive water loss and subsequent bill surges. According to the U.S. Geological Survey, running toilets can waste about 20 gallons of water per day.

Some customers also call over clogged toilets. Though most people tend to ignore toilet clogs, they are pretty wasteful as one is forced to flush more than once before the toilet is completely clean. Often, such blockages are caused by flushing excessive toilet paper or non-flushable wipes. Occasionally, mineral build up from Sugar Land’s hard water is to blame, as it restricts flow through your pipes.

Drippy faucets are relatively standard, especially in older homes and areas with hard water. These are caused mainly by worn-out washers and O-rings or corroded parts, which are often a result of the effects of our hard water.

Like running toilets, drippy faucets are also wasteful. According to statistics, homes with leaks can waste up to 9,400 water gallons annually.

Clogged drains also account for a large portion of our appointments. These range from kitchen sink clogs to slow draining bathroom and laundry room. In most cases we have handled, hair and soap scum in the bathroom drain, food particles, and grease on kitchen sinks are usually the common causes. Mineral accumulation from the city’s hard water restricts flow through your pipes and contributes to clogs and slow drains.

Most of the clogs are easy to work on, with simple interventions such as unscrewing the pipes. However, where the issue affects the entire home drainage, we usually locate the problem on the sewer line, which requires more work.

Pipe leaks are relatively common across most communities in Sugar Land, especially in older homes prevalent in the area. The sudden expansion and contraction of pipes from extreme weather fluctuations in the city cause the pipes’ joints to loosen and start leaking.

Tree root invasion is also a common cause of leaks in both water supply and sewer lines. Either the roots enlarge beneath the pipes, exert pressure on the joints, or find a way in cracked sewer pipes and grow inside.

Old homes that have copper pipes also have leaking issues due to corrosion. Similarly, high water pressure increases wear and tear on the lines, heightening the chances of leaking.

Water heater issues are more prevalent in homes with tank-type heaters. These include leaks from corrosion, limescale accumulation from the city’s hard water on a heater’s coils, and wear and tear on the various heater’s parts. Tankless heaters also have wear and tear issues, but they are fewer as they don’t store water.

How Does the Water in Sugar Land Affect Your Plumbing?

Our water in Sugar Land is usually surface water drawn from the Oyster Creek. Several plants, namely Greatwood, Main, New Territory, and River Park, treat the water. The water from these sources ranges from soft to moderately hard and hard.

Usually, water hardness is a measure of the minerals present, mainly calcium and magnesium. This is measured in milligrams of calcium carbonate present in a liter of water (mg/L). U.S. Geological Survey (USGS) classifies hardness as follows:

Our water has an average hardness of 143 mg/L. However, it varies across the plants as follows:

The minerals in hard water form a coating on the pipes, appliances, and fixtures, commonly known as limescale. With time, limescale buildup narrows pipes, which then reduces the water pressure. Besides clogging the pipes, limescale buildup on showerhead nozzles and faucets reduces the water flow. Also, the minerals accumulate inside the water heater, thereby reducing heating efficiency. As a result, a heater consumes extra energy, which bloats electricity bills.

The accumulated minerals usually react with the pipes. Over time, pinholes develop, and they start leaking. This also happens on metallic fixtures and appliances such as faucets, heaters, etc.

Disinfecting water involves using chemicals to kill pathogens and make it safe for consumption. Sometimes this requires using extra amounts of chemicals to keep the water safe throughout the supply system. Though most disinfectants are safe, the Environmental Working Group (EWG) observes that some exceed their health guidelines.

According to their tests on Sugar Land water, there are 33 contaminants. Some of these chemicals harm the plumbing systems by corroding the metals, while others disintegrate rubber linings.

How Much Does Plumbing Usually Cost in Sugar Land?

The cost of hiring our plumbers in Sugar Land varies depending on several factors, such as labor costs, material costs, and project type. Most projects range between $115 and $875.

Generally, you can spend $450 on average, including material, labor, and overhead costs. However, the price can drop to under $100 for smaller jobs, such as unblocking a minor drain clog or rise to several thousands of dollars for bigger projects, especially those involving installations or remodeling.

That said, the factors affect the cost as follows:

We often charge hourly rates on most projects, which range between $40 and $100. The rates vary depending on the project type. However, we offer quick, minor projects on flat fees as the hourly rate may fail to cover overheads adequately.

Material costs vary depending on the project type and your preferences. For example, repairing a leaky faucet requires purchasing only a few parts. On the other hand, installing a hot tub or a water heater is cost-intensive as you need various materials. Similarly, if you prefer high-end materials over standard ones, you are likely to spend multiple times more.

As mentioned, we quote you depending on the project type. Even with projects that take the same time to complete, you may end up spending different amounts due to the cost of materials involved.

Can Better Plumbing Save You Money in Sugar Land?

Better plumbing can lead to high savings in terms of water and energy costs, plus maintenance and repair costs. However, most of the savings come in the long run. Some of the ways you can save through better plumbing include:

If you have a conventional water heater, you can save significant amounts by replacing it with a tankless model. The latter usually has fewer mechanical breakdowns than the former, which translates to savings in repair costs.

Again, tank-type heaters are more susceptible to heating inefficiency due to limescale buildup in the tank. As such, they end up consuming more power to heat the water. Not forgetting the heated water is not always used up, which leads to energy wastage.

Besides, tankless heaters usually last longer than conventional models, even up to 20 years. This amounts to significant savings in replacement costs.

Replacing your standard fixtures with WaterSense-labelled products can cut your water usage by at least 20%. This can amount to much savings in the long run, given it’s a month-by-month saving. The Environmental Protection Agency (EPA) estimates that you can save at least 30% water costs.

Other money-saving avenues include:

When Should You Call the Water Utility Company in Sugar Land vs. Hire a Plumber?

If you often have difficulty differentiating water issues that require calling the water utility company and hiring our plumbers, here are a few examples of relevant situations.

When to Hire Our Plumbers

When Do You Need Permits for Plumbing Service in Sugar Land?

Sugar Land City plumbing regulations require you to obtain a permit before engaging our plumbers for significant works such as remodeling, installation, and replacing defective pipes. However, you don’t need a permit for jobs such as stopping leaks in the water, soil, drain, waste, or vent pipe, repairing leaks or clearing stoppages in fixtures, pipes, and valves, and installing water closets.

Recent Requests We Received From Customers In Sugar Land, TX

replace a kitchen sink hose from valve to sink sprayer. is your rates by the hour or by the job ?

One of the pipes outside the house is broken.

Pipes frozen - can't get any water