Looking for an affordable plumber in Harrisonburg, VA? Great! Mr. Blue Plumbing is at your service 24/7. 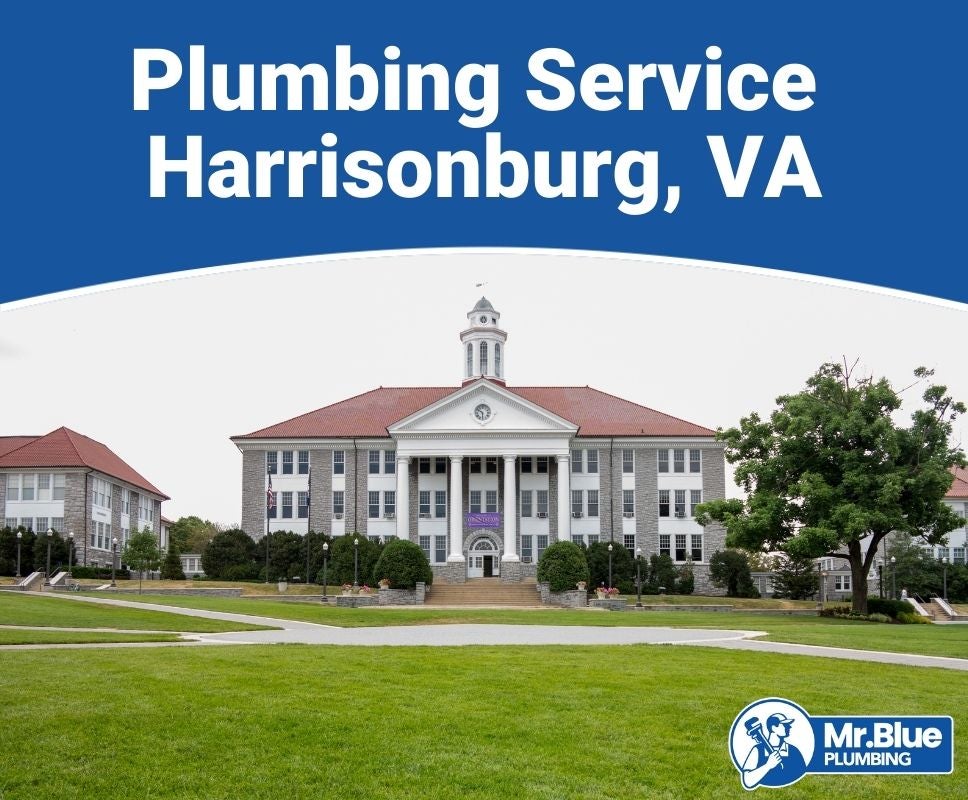 Tell us about your plumbing issue in the form and we'll get you connected with a Mr. Blue Plumbing expert in Harrisonburg today!

What Are the Most Common Plumbing Issues in Harrisonburg?

You can’t discuss common plumbing issues in Harrisonburg or the surrounding area without mentioning the dreaded sump pump failure. Rainy season can happen any time of the year, but the summer months see the most precipitation. When too much rain falls in a short amount of time, your sump pump will work harder to expel the excess water out of the home. If your pump isn’t working correctly, your basement floods, and oh what a mess you get on your hands.

No one wants to think about it, but it happens more often than we’d like to admit. There are a few reasons that failure can occur. One of the first things to look for is a switch that’s stuck. The switch is what triggers the pump to activate. If it doesn’t recognize the rising water, it will not turn on and pump it out. Another point to consider is that the sump pump may just be wearing out from long-term use through Virginia’s rainy seasons. It might be time to replace it with a better model instead.

Toilets are nice to have around, but sometimes they can give us the most grief. There are two main issues we see a lot with them. One deals with a clog that the homeowner can’t get to flush, and the other is the constant running water in the tank on the back of the toilet.

Clogs can come from items stuck in the pipeline or something worse, like a tree root blocking the sewer drain pipe. The city’s hard water can also leave mineral deposits in the pipes that contribute to blockages. Plungers are undoubtedly helpful, but inevitably you’ll come across a situation where even the plunger doesn’t work. What then? That’s when you call us. We have the equipment and the know-how to get the clog blasted through so that you can get back to business.

Most homeowners around here know what it’s like to have low water pressure. It’s no fun, especially if you’re trying to take a shower or wash clothes. Determining the problem can be challenging to do on your own. Calling a professional company like us will get you answers and a solution in a relatively short amount of time. Each situation is different, but there are a few items we would take a look at:

Many instances are caused by mineral build up from the city’s hard water, which reduces the inner diameter of your pipes and restricts water flow.

How Does the Water in Harrisonburg Affect Your Plumbing?

The City of Harrisonburg gets its water supply from two different sources. One comes from the Dry River in Rawley Springs and the other from the North River in Bridgewater. Both are surface water sources that provide high-quality drinking water to residents of the City. The water is filtered naturally through rock and soil and then travels through the City’s filtration system. Most contaminants are removed before reaching a resident’s home.

During testing in 2019, copper and lead traces were found in their samples, but neither were dangerous levels. Typical sources for both these metals are household plumbing pipes. To help minimize exposure to lead and even copper, you can replace the old metal piping or, as the city recommends, let your faucets run approximately 30 seconds or until it becomes cold and reaches a consistent temperature.

Two contaminants that the City’s filtration system doesn’t generally get are calcium and magnesium. These contribute to the water’s hardness levels, so have your home’s water checked to see where it’s at. If you see 61-120 mg/L, you’re in the moderately hard water range and should consider remedying that. If left alone, they can cause buildup in your piping, which can escalate the corrosion process and lead to leaks in the future. A water softener installed in your home will keep those two metals in check to avoid that.

How Much Does Plumbing Usually Cost in Harrisonburg?

Many factors go into determining plumbing costs in the Harrisonburg area. Depending on the project’s scope, you could expect to pay anywhere from $85 for a small task to $350 for a medium-sized job. If it’s a large project, the costs could go as high as $1,000 and even more. Let’s look at just a few different factors that go into pricing a plumbing job in this area.

The length of time a job takes is one of the most significant factors determining the price you end up paying our plumbers in this area. Small jobs may take 30 to 45 minutes, so the price would likely be on the cheaper end of the spectrum. A project that takes several hours will raise the cost, especially if the job calls for hourly rates.

If you want to get an idea of what it could cost, figure out how long it might take to do the job. Allow extra time to retrieve necessary parts from the vehicle, cut pipes to the specific length needed, and prepare pieces to be installed. Water heaters, for example, need a lot of prep work and soldering before the installation is completed. The longer the job will take from start to finish, the more costs you’re likely to incur. However, if you hire a company like us, you’ll get a high-quality job that will last a long time.

Cost Factor: What Is Found in the Pre-Examination

As much as homeowners don’t want to think about it, a simple job just might turn out to be a major one under the surface. You find a clogged toilet and think it’s stubborn because the plunger isn’t working. Our plumbers come out to assess the situation and find that the simple clogged toilet is a blockage in the sewer drain.

What you thought was a job that would cost under a hundred dollars is now probably going to cost you several hundred dollars, depending on what’s going on. In a situation like that, there’s no way around the issue. The problem, lying under the surface, has to be dealt with. A professional like us will find the issue and bring it to your attention, so you’re not left with more plumbing problems in the future, costing you even more money.

If you’re looking into upgrading your piping, it will not likely be a straightforward job. Our plumbers may run into other issues during the replacement. You may have the wrong fittings for the new piping, or the layout of the plumbing system isn’t up to code. This would require more parts you may not have anticipated. Permits might be needed to ensure the proper installation meets the current requirements of the City’s code.

The same goes for appliances such as your water heater. The current install may not be the same as the new unit you purchased. Pipes might need to be rerouted, or you may need different size fittings to complete the project. While most plumbers try to avoid this scenario, it’s often inevitable to make sure the job is done right, so you don’t have to worry about problems rising again soon.

Can Better Plumbing Save You Money in Harrisonburg?

Residents in Harrisonburg could save money with better plumbing, especially if you currently have an older home with pipes that have been around for a long time. The pipes used years ago could deteriorate over time and rust with the metals sometimes found in the City’s water supply. Corroded pipes can cause low water issues and ultimately start leaking, which wastes the home’s water and will often cause your water bill to go up.

Replacing the piping system in the home with a more efficient one, like copper, will make all the difference. Not only will you not have to worry about corrosion, but the water pressure might also improve, reducing your chances of getting water leaks in the near future by a large percent. Upgrading the water heater to a more cost-efficient one will also help you save on energy.

When Should You Call the Water Utility Company in Harrisonburg vs Hire a Plumber?

Just like most cities in the surrounding area, Harrisonburg’s city water department stays on top of things on their end. They keep the water supply running correctly and ensure it remains as free from contaminants as possible. Water and sewer pipelines that run from city sources to the home’s water meter and wastewater system are their responsibility. They’re glad to handle any problems that arise within any of these areas. However, they’re not going to deal with plumbing issues that occur from the water meter or wastewater system into your home. You need to handle that. If you’re not sure what to do or just need some help, give us a call, and we’ll help you sort out the problem.

When Do You Need Permits for Plumbing Service in Harrisonburg?

The City of Harrisonburg requires a permit in several situations. Suppose you’re planning on constructing or remodeling a building that needs plumbing, adding a room onto your home that will require water piping, putting in a swimming pool, as well as other large plumbing projects. In that case, you will need to apply for a permit before you can begin work. If you’re not sure if the job requires one, contact the City’s water department and let them know the details of your project. They’ll let you know if one is needed or not.

Dealing with plumbing issues in the Harrisonburg area can get frustrating and complicated. Don’t stress yourself out by trying to figure it all out by yourself. Give us a call, and we’ll do the dirty work for you, so you can focus on what’s more important, like your family.

Recent Requests We Received From Customers In Harrisonburg, VA

remove a fiberglass tub shower combination and replace with a modern tile shower.

Jetted tub in master bath. Jets do not work. Most likely need new motor. Do you get involved in that type of work? Thanks.

I purchased a new Delta kitchen faucet (one hole) and would like someone to install it.