Looking for an affordable plumber in Kenosha, WI? Great! Mr. Blue Plumbing is at your service 24/7. 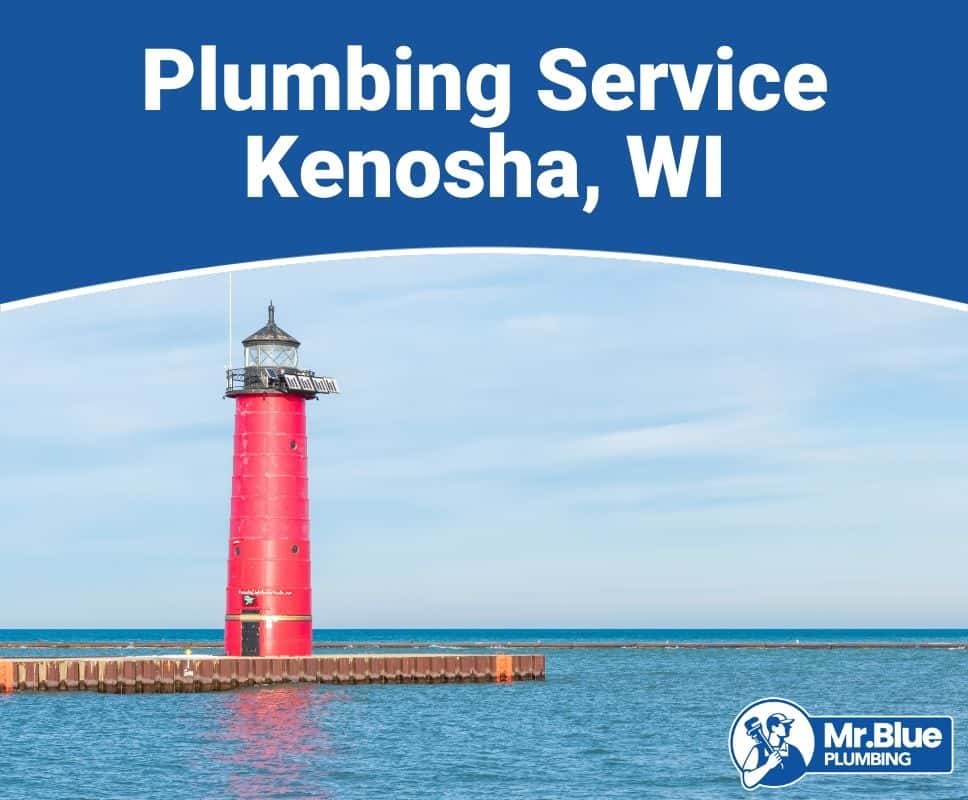 Tell us about your plumbing issue in the form and we'll get you connected with a Mr. Blue Plumbing expert in Kenosha today!

What Are the Most Common Plumbing Issues in Kenosha?

One reason people love Kenosha so much is the beautiful historic homes throughout the area, such as Pearl Street, Liberty Park, and Third Avenue Historic Districts. Some people don’t realize these grand old homes can also have grand problems. The older the home, the more predisposed to plumbing and other basic issues.

Galvanized pipes are an alternative to deadly old-fashioned lead pipes. Unfortunately, these pipes come with their own set of problems.

Some plumbing issues are common no matter the age of the home or plumbing system, such as leaky faucets, slow drains, and clogged pipes. Those are typical issues that happen everywhere, but we also have the harsh Wisconsin winters to deal with. Temperatures drop well below freezing, which is no good for outside faucets.

How Does the Water in Kenosha Affect Your Plumbing?

Wisconsin water is deemed moderately hard. The standard water hardness for local residents is 158 PPM. Madison, WI has the hardest water in the state with 350 PPM. Wausau has the softest, with 90 PPM. Hard water is detrimental to plumbing. The build-up of minerals restricts water flow as well as damages appliances and leaves white flaky deposits behind on showerheads and faucets. It can even damage your clothes.

Kenosha’s water is tested for safety 10,000 times per year. It meets or exceeds all state and federal water quality standards, according to the 2021 Wisconsin Department of Natural Resources report. Hard water doesn’t affect human health but it can cause a lot of damage to appliances, hardware, and your water bill.

How Much Does Plumbing Usually Cost in Kenosha?

Plumbing service isn’t cheap in Kenosha with homeowners paying between $427 to $480 and the average cost being $453. There are plenty of reasons why plumbing costs are expensive. The work can be difficult and requires specialized knowledge and tools, but other factors can cost even more. One we see quite often is when people attempt to fix their plumbing issues and end up making it worse. It’s easy to get in over your head when you’re not a professional.

Another common price hijacker is letting problems go too long. The longer you wait, the more expensive the repair, in most cases. That’s why it’s so important to fix problems as soon as you spot them. Here are a few more typical price issues.

It may be the easiest plumbing job ever, but if it’s 12 feet under the foundation, it gets problematic. The cost of digging and replacing parts also factor into the final price. We aren’t talking only about the price of labor. Another cost component is timing. If you require our services after routine business hours, you can expect to pay more.

Another major influence in pricing is the size of the undertaking. For instance, unclogging a drain or replacing a drippy faucet line costs considerably less than re-galvanizing an entire pipe system, for instan.

The two basic ways of pricing a plumbing job both have benefits and disadvantages. A flat price is agreed to before the job begins. The main benefit is there are no surprises about the price, regardless of the time it takes to complete or any obstacles that develop.

An hourly price rate is based on how long the job takes to complete and how much the raw materials cost. We always provide a realistic estimate and update you during the project. A possible disadvantage to this method of payment is hiring a plumber who is inexperienced or unethical and draws out the project longer so it’s more expensive than necessary.

Can Better Plumbing Save You Money in Kenosha?

Better plumbing can save you money no matter where you live, but when you have hard water, especially fresh from the lake, you’ll have the occasional problem. Investing in better pipes, hardware, and a quality water softener goes a long way in protecting your plumbing and saving you money.

New plumbing can be pricey, but it saves you money in the long run. Immediately making repairs saves money on future water bills too. A simple leaky faucet costs as much as $15 a year or even more if it’s a bad drip. It doesn’t sound like much, but it adds up quickly. They also waste almost 4,000 gallons of water every year.

A scant 1% of the water on the planet is suitable for drinking, making the cost of that leak significantly more important. Below are some other ways better plumbing saves you money.

When Should You Call the Water Utility Company in Kenosha vs Hire a Plumber?

Water utility companies will perform repairs, such as a broken water mains in the street, on city property only. It’s harder to judge liability when it’s your own home. Pooling water in your lawn could mean a city water line issue, but it might mean a problem in your plumbing system.

Kenosha water utility performs maintenance visits, but if the problem is with your plumbing system, it’s your responsibility. You’re also stuck with the fee from the visit and repair costs.

A big jump in your water bill over a few months is a sure sign there’s a leak somewhere in your plumbing system. A slow leak will even cause a lot of damage given enough time. It’s best to call us out the first time you see a problem. Although, it most likely didn’t start the moment you noticed it and has been dripping for some time.

Puddled, pooling, and standing water on your lawn is another time you don’t want to wait to call a professional plumber like us. Water takes time to work its way to the surface. So, a puddle usually means a leak down below the surface. Repairs may be as simple as replacing a section of pipe or as complex as excavation.

If water pressure lessens, or goes out entirely, call Kenosha Water first, not a professional plumber like us. There’s probably an outage from inclement weather or nearby construction. Wait to call us until the city confirms the problem is not with them.

Clogged showers, sinks, tubs, and toilets or those that don’t drain all the way are all issues that we can take care of in no time.

When Do You Need Permits for Plumbing Service in Kenosha?

Wisconsin law requires some plumbing work to be completed by a licensed plumber like us. Kenosha City Code of Ordinances lists all the laws about home plumbing projects. Small projects, like a leaky faucet, won’t need our skill. Other projects, such as digging a sewer line or replacing a water heater, require a Kenosha City Plumbing Permit.

The law also requires homeowners to obtain a permit to replace a drain line, perform repairs on sewer lines, repipe a house, and to move any plumbing and pipes to another area of the house.

We are knowledgeable and retain apprised information on all codes, ordinances, and laws to steer homeowners to the correct resource and be there to help in case of a mistake.

Recent Requests We Received From Customers In Kenosha, WI

Install a humidified on the furnace.