Looking for an affordable reverse osmosis system in Denver, CO? Great! Mr. Blue Plumbing is at your service 24/7. 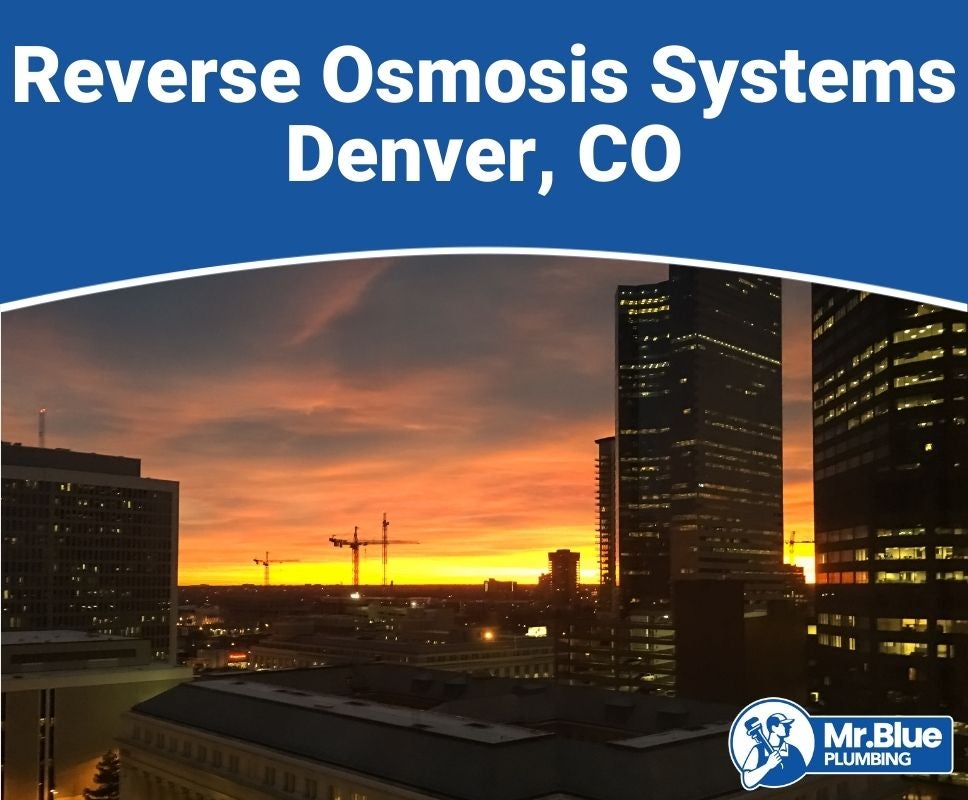 Let us know that you need information on reverse osmosis in the form and we'll get you connected with a Mr. Blue Plumbing expert in Denver today!

How Much Does Reverse Osmosis Installation Usually Cost in Denver?

The cost in Colorado is close to the national average, which will run you between $500 and $1,500 for a whole house system (depending on the size of your home), or about $150 for each faucet filter. You should also expect to pay about $90 an hour for installation. However, some factors can increase or decrease this cost.

Generally, we put reverse osmosis filters on faucets typically used for drinking or brushing teeth only and not on the whole house, showers, etc. Thus, the cost of the system is affected by how many fixtures you want to place filters on.

Older homes in Denver tend to have lower water pressure, or rather low water flow, which has the same effect. This makes your reverse osmosis system less effective and causes it to waste more water, increasing your water bill over time.

The only solution to this problem is replacing the service line all the way to the street and possibly some or all plumbing inside the house. If your service line and/or plumbing involves lead, this can be well worth it due to the increase in resale value. Otherwise, you will have to live with the lower flow and the potential higher cost. Also, due to Denver’s tendency to experience drought, extra water use can be particularly expensive as the city sometimes implements shortage pricing to discourage water use.

In some areas, you might have to get extra filtration. Thankfully, Denver is generally not one of them. The overall good quality of the water and the lack of extensive mineralization tends to reduce filtering needs and thus the cost of your system.

This does not mean, of course, that you won’t find a reverse osmosis system valuable. Even the small amounts of contaminants and disinfectant byproducts found in Denver’s water are worth the effort of removing to get you the highest quality water possible.

What Are the Most Common Water Contaminants in Denver?

Drought is a common problem in Denver, especially after mild winters that leave insufficient snowfall. The water in Denver comes from a variety of sources, but ultimately primarily from mountain snow runoff. There are no deep wells or artesian sources in Denver, which means there is little risk of additional contamination caused during times of shortage. However, water rationing during times of drought can cause issues when using reverse osmosis systems, which tend to wastewater. It’s important to choose the most efficient system you can afford. We can advise what system to choose and how to mitigate water waste from the system.

In general, this means that Denver’s water quality is high, although low levels of some contaminants are found. These are well below the levels considered safe, but include barium, chromium, copper, and nickel. Fluoride is added to the water to promote tooth health but occasionally can also enter as a contaminant. There are also small amounts of aluminum (due to nearby natural deposits) and sodium. As with many places, some byproducts of disinfection do come through, which include trihalomethanes, haloacetic acids, and chlorine. All of these are within safe levels, but it is still worth filtering them out.

However, in the past, there have been issues with chromium 6 in the water in Denver. While the chromium levels are within legal limits, they are outside California guidelines, which has led to some consumer concerns. Chromium 6 occurs naturally in surrounding rocks, can sometimes cause skin reactions, and is a potential carcinogen. The jury is still out on what levels cause health problems, but using a reverse osmosis filter can help. (Chromium 6 should not be confused with chromium 3, which is an essential mineral that we generally consume in food). Current levels of chromium in the water, which may include chromium 3, are low and probably not a concern. This may be a worry of the past, but if you are concerned, you can get your water tested to ensure peace of mind and use a reverse osmosis filter to reduce levels further.

Lead plumbing is an issue in Denver, and many older houses still have lead service lines. Denver Water is engaged in a program to replace these lines, but it’s taking a while due to the large number. Although customers technically own the service lines, Denver Water is replacing lead lines free of cost. The goal is to complete the project within 15 years. You can also get a partial reimbursement if you hire us to replace a lead service line. It’s a good idea for those who live in older neighborhoods to get their water tested for lead. Reverse osmosis filters located at faucets and fixtures can effectively remove lead from your drinking water. However, it’s a good idea to get lead piping replaced when you can, as doing so increases the resale value of your home. At the very least, it’s worth costing out replacing the lead service line rather than waiting for Denver Water to get to you.

Denver Water also offers free water pitchers and filters to anyone who has a lead line until it can be replaced. Anyone in an older home with a formula-fed infant is particularly vulnerable to the small amounts of lead that can leach from lead solder. When the water is softer in the summer, there is likely to be more lead leeching, and you should be particularly careful about the amount of lead in your tap water. The projects to mitigate lead are ongoing, and eventually, this will not be a problem.

The hardness of Denver’s water is highly variable by season, ranging from soft in the summer to moderately hard in the winter. Because Denver’s water doesn’t come from artesian sources, it is generally low in mineral quantity. However, when waterways and reservoirs freeze, the water tends to absorb more minerals. Hard water doesn’t bring health concerns, but it can dry out your hair and leave “scaling” on fixtures and plumbing. The south part of the city also has harder water than the north part, due to different collection systems. This means that one Denver home might have no issues with hard water whatsoever, while another might have real problems.

Can Residents in Denver Benefit From Reverse Osmosis Treatment?

In many places, reverse osmosis is used to improve the taste of the water, but historically, Denver has some of the best tasting water in the nation. The primary reason to use a reverse osmosis filter is to deal with lead contamination or with concerns about other contaminants.

Using reverse osmosis treatment does remove the various byproducts of disinfection that can be a concern for people who are sensitive to them. You should get your water tested to make sure there is nothing in it that is causing concern.

Reverse osmosis filters will also help remove minerals that might change the taste of your water during the winter when Denver’s water tends to be harder. As the mineralization is variable, residents tend to notice the taste more than if it was constant. Generally, remineralization is not a good choice for Denver, where the mineral content is already low, and that is what you are used to in the taste of your water.

How Often Should Residents in Denver Replace Reverse Osmosis Prefilters?

Typically, reverse osmosis prefilters should be replaced every six to twelve months. Prefilters are used to protect the main filter and elements from particles, especially minerals, but also larger contaminants such as metals.

Because Denver’s water is generally softer in the summer, we may recommend replacing prefilters in the fall. It may also depend on the specific hardness of your water, which can vary a little bit across the city from north to south. It depends on which treatment plant is servicing your home.

However, Denver’s water is not hard enough to warrant a more frequent replacement of prefilters. The general lack of minerals reduces the strain on the system, and most householders can get away with replacing them at the longer end of the typical cycle. Again, you should always follow the manufacturers’ instructions on replacing prefilters, as not doing so can waste water and shorten the life of your reverse osmosis system.

Do You Need a Water Softener With Your Reverse Osmosis System in Denver?

In general, water softeners are not recommended for most households in Denver. The water is only moderately hard and generally only seasonally so.

However, if you live in the south part of the city, you may have hard enough water that a water softener would be a good idea. Having a water softener generally extends the life of your reverse osmosis prefilters by reducing the amount of minerals it has to catch.

The choice as to whether to get a water softener is thus entirely your own and depends on how hard your water is and how many issues the hard water is causing for you. Denver is not an area where a water softener is a no-brainer, but nor is it one where they are definitely not needed.

Recent Requests We Received From Customers In Denver, CO

Under the sink reverse osmosis. Will need faucet to be drilled into the granite.

I got a water sample test done by Colorado Analytical labs and my results came high for sodium and sulfate. What do I need to balance this ratio out?