Looking for an affordable reverse osmosis system in Columbus, GA? Great! Mr. Blue Plumbing is at your service 24/7. 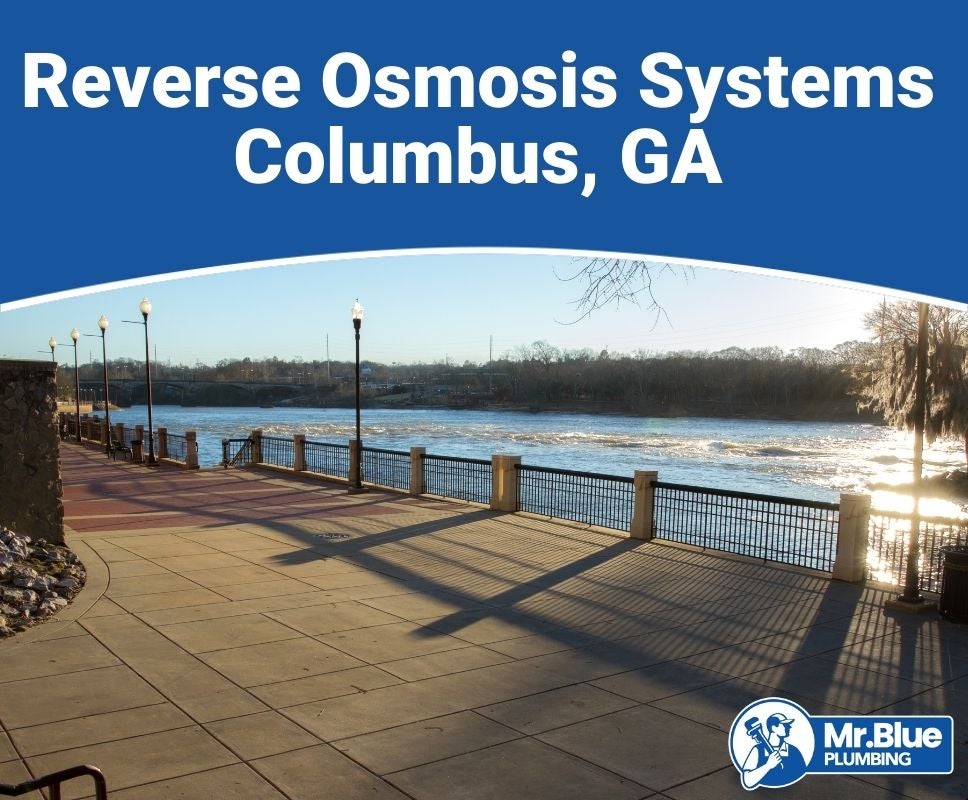 Let us know that you need information on reverse osmosis in the form and we'll get you connected with a Mr. Blue Plumbing expert in Columbus today!

How Much Does Reverse Osmosis Installation Usually Cost in Columbus?

We’re starting to see more residents in Columbus, Georgia, turn to reverse osmosis systems for their home water usage. Many of them tell us they’re doing so because the water quality reports here are sometimes questionable. When looking at water reports of recent years, as many as 11 contaminants were found above recommended health guidelines.

Concerns like this continue to this day, but the cost of reverse osmosis systems might be more concerning. We get questions all the time about how much it’s going to cost to install one of these units.

They aren’t always cheap to install, yet the cost depends on numerous things, mainly on water usage needs. While there isn’t any set price, the average cost of installation now runs around $1,500 for a whole-home system. Single tap (or Point of Use) systems often cost less since they don’t provide water for a large home.

Other cost factors apply. Take a look at these three common ones:

Under Sink or Countertop Models

It’s possible to go cheap with some reverse osmosis systems. One placed under a sink or on a countertop can run well under $500. Sometimes real bargain versions of countertop models are found for as little as $100.

A cheaper reverse osmosis system might be a good choice if living alone in a small house. However, a whole-house system does more good at eliminating water contaminants through every tap for most families.

Just keep in mind cheaper options are out there, albeit sometimes experiencing malfunctions far too early.

A basic reverse osmosis system will have at least three filtration processes: a pre-filter, a post-filter, and the membrane. More sophisticated RO systems sometimes have as many as six filtration systems.

Only those who live in rural areas with possibly higher contaminants would need something like this. Some models even add UV sanitation features.

The more sophisticated the equipment, the more it’s going to cost. One way to know for sure is to have a water quality test done. If the water is clean most of the time, a simpler system works best.

Adding things like this are mere luxurious add-ons that can enhance the experience of an RO system if one can afford it. Not everyone needs these extras to gain the best benefits.

Our team never pushes these extras unless a resident or family personally requests them. In most cases, they’re added on a separate day after the initial installation takes place.

What Are the Most Common Water Contaminants in Columbus?

As seen above, contaminants have been found in Columbus’s water. Even though the City maintains their water is safe to consume, not everyone is so trusting.

Reverse osmosis systems can safely filter out these particular contaminants found in the City’s water. Let’s take a look at some of the pollutants possibly causing the most severe health issues.

Sometimes residents find Bromodichloromethane in their city water due to the addition of chlorine. The evidence seems to show small amounts of this contaminant won’t cause risks to one’s health. However, some studies showed lab animals consuming high amounts caused liver and kidney damage.

Even though it’s one of the worst contaminants in the world, a reverse osmosis system can guarantee it won’t end up in a resident’s city or well water.

Not many know chlorite is a disinfectant byproduct due to the use of chlorine in the water. As noted by EWG, Georgia has had 22 utilities report chlorite above recommended guidelines, including here in Columbus.

It can cause some severe health issues like blood cell changes, thyroid issues, hormone disruption, or harm child reproduction and development.

Chlorination also causes chloroform formation in city water, and it’s usually inhaled more often than consumed. The contaminant may cause nervous system issues as a short-term effect. Evidence also suggests long-term exposure could cause problems with the liver or hepatitis.

Known as the “Erin Brockovich” contaminant, chromium-6 has long been known to cause cancer in many prominent cities. We all remember when Brockovich called it out, including the famous movie made about the case. Here in Columbus, chromium has also been detected, yet supposedly at not alarming levels.

Reverse osmosis can still ensure this contaminant doesn’t get into one’s water supply and pose a risk to their family’s health.

Nearly all of these contaminants are created as the result of water chlorination. Dibromoacetic acid is yet another in this category with the potential to cause cancer. It may also cause changes in fetal growth and development.

Dibromochloromethane, which is related to bromoform, is said to cause much of the same health issues bromoform does. Consuming or breathing it could cause someone’s brain functions to slow unexpectedly.

Dichloroacetic acid is one of five haloacetic acids typically formed again through chlorine use. As a disinfection byproduct, it’s also known to cause cancer and child developmental issues if consumed in heavy doses.

EWG notes this is found in nearly every State, in addition to here in Columbus, Georgia.

As the second most prominent disinfection byproducts, haloacetic acids are confirmed to be carcinogenic when consumed too often. Scientists have labeled it HAA5 because of the five different acids involved here, including dichloroacetic acid above.

Well water users here in Columbus are more prone to getting nitrate in the water. It forms naturally yet is said to cause various health problems, mostly in infants and pregnant women.

Fertilizers used around private wells often get into the water and cause nitrate to build up.

Trichloroacetic acid is known to form from chlorine use. We see many similar contaminants when testing the water for customers, particularly if going off city water lines.

Unfortunately, trichloroacetic acid could cause cancer and pregnancy complications if consumed too heavily.

Can Residents in Columbus Benefit From Reverse Osmosis Treatment?

We frequently ask customers what they want from their new reverse osmosis treatment system. At the top of the list is being able to eliminate as many contaminants as possible.

Out of all benefits, RO systems can remove total dissolved solids at a 99% level. This can be achieved with just a simple model, though more technological models can work at a higher rate.

Equal with contaminant removal is having peace of mind about not affecting one’s health. Families are still concerned about hefty medical bills if polluted drinking water causes illness.

Contaminants always affect people in different ways, making the risks without an RO system all the greater. What oother unique benefits can one enjoy with one of these units?

Maintenance is relatively easy on reverse osmosis systems, with the only thing needed being periodic filter changes and replacing membranes. We’ll look a little more at what it means to change a prefilter in the next section.

Improving the Taste of Tap Water

Everyone wants water that tastes good and pure. Too many people refuse to drink city water because they hate the taste of chlorine. Kids might reject drinking tap water and turn instead to expensive bottled water or drinking unhealthy soft drinks.

Reverse osmosis units help improve water taste to get more people in the family to consume water from the tap. On a health level, this is essential, especially if an older member of the family needs more water to avoid dehydration.

Those who make pasta or soups often need to have quality water to make these foods taste appealing. Water with chlorine and other contaminants can affect its taste and the smell.

Having an unending supply of pure tap water is a significant plus for those who spend time making food at home. On a commercial level, reverse osmosis systems are a vital part of the restaurant industry.

Guests at home are going to appreciate having good-tasting food as the result of pure water. The same goes for customers in restaurants who pay for only the very best.

Going green with any sort of water filtration process is appealing to many people here in Columbus. First, not regularly buying bottled water helps eliminate one’s carbon footprint in disposing of the bottles.

RO systems also operate with actual efficiency. It ultimately cuts down on water bills and reduces the need to drive to the grocery store to replenish bottled water constantly.

How Often Should Residents in Columbus Replace Reverse Osmosis Prefilters?

Anyone deciding to buy an RO system needs to realize prefilters will get the dirtiest the fastest. That’s because it’s the earliest step in the filtration process. More contaminants will be caught in this filter, meaning it’ll need changing sooner than the other filters.

Opinions occasionally differ on how often you should change a prefilter. We recommend you change it every six months to a year. An annual change is acceptable if you don’t have any significant issues, like heavy water.

Also, remember to change the membranes once in a while. Membranes only need changing every couple of years Cleaner water might mean only having to change every four to seven years.

An inspection is an excellent idea to determine just how dirty the filters and membranes have become from contaminants.

Do You Need a Water Softener With Your Reverse Osmosis System in Columbus?

It’s a good idea to do a water hardness test before having an RO system installed. Doing so can determine whether an additional water softener is needed to keep the water as soft as possible. After all, overly hard water is known for causing clogs in pipes later.

Columbus does have moderately hard water at times, making it a good idea to use a water softener as an additional tool. We can install one for you, though mainly meant not to overwork the reverse osmosis system when experiencing extra hard water.

Recent Requests We Received From Customers In Columbus, GA