Looking for an affordable reverse osmosis system in Cypress, TX? Great! Mr. Blue Plumbing is at your service 24/7. 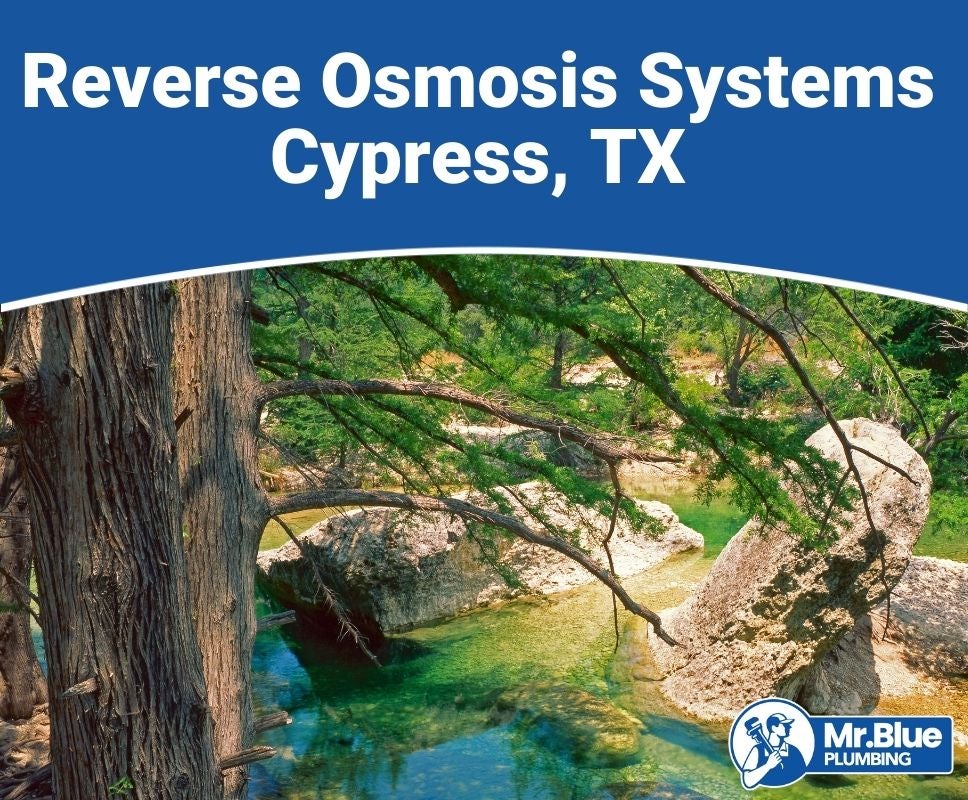 Let us know that you need information on reverse osmosis in the form and we'll get you connected with a Mr. Blue Plumbing expert in Cypress today!

How Much Does Reverse Osmosis Installation Usually Cost in Cypress?

Reverse osmosis involves removing contaminants from a resident’s water supply using a partially permeable membrane and pushing the water under pressure. It’s a unique technology allowing healthier water for everyone in Cypress, Texas. After all, arsenic has been detected at high levels in recent years within Cypress’s water.

The water quality here is still mostly good, but concerns over contaminants continue to worry residents. No one wants to deal with water that could cause illness to them or their family.

Other contaminants are sometimes found in the water here like Barium, Fluoride, Manganese, Nitrate, and Selenium. Most of these can be easily removed with a reverse osmosis installation.

It’s impossible to know what the exact cost of installing this equipment is due to variables, sometimes beyond anyone’s control. On average, one can expect to pay anywhere from $12,000 to $18,000 for a complete system. While it does cost money, other factors can make the installation price a little less or more:

Water Demand in the Household

How much water a family plans to use is one of the top cost factors in how much reverse osmosis systems cost. It works much like well pumps or septic tanks with their own installation costs.

The more water used daily, the bigger the equipment has to be to work efficiently. Buying a whole home reverse osmosis system costs the most because they’re made for bigger homes and big families. Also, it’s best suited for those who live in rural environments where various water source challenges might be present.

Other times, families need an extra amount of pre-filtration equipment to keep their water the safest and freshest it can be. Adding this extra filtration system can inflate the total installation price.

For many, it’s worth it to ensure every tap in the house has healthier water availability. Most pre-filtration systems work with 5-micron rotation to remove everything from dirt, grime, sand, to rust pressure from the water supply.

More people are starting to use reverse osmosis systems that provide a minimum or zero-waste process. These are far more sophisticated in their design and take more time to install.

As a result, the cost factor here could go up substantially based on the design, complexity, and labor time in installing the equipment.

What Are the Most Common Water Contaminants in Cypress?

We noted above some contaminants occasionally found in Cypress’s water. What do you really know about those contaminants, though?

It’s worth taking time to learn what each one might do to human health if consumed through one’s water system.

Despite arsenic being naturally found in groundwater throughout the world, it’s one of the most dangerous contaminants one can consume. According to the World Health Organization, arsenic can cause cancer and skin lesions if one is exposed to it long-term in water.

Not everyone would expect arsenic to turn up in a place like Cypress, Texas. Yet, it has, at times.

Vomiting, abdominal pain, and diarrhea are some of the more immediate signs someone might have consumed arsenic in their water system. It’s all the more reason reverse osmosis systems are so useful here in Cypress and across the world.

Due to small amounts of Barium being found in Cypress’s water, it’s also important to know about its effects. It’s generally not harmful if most of Barium’s compounds dissolve after getting into the water supply.

If more compounds are in there, it could cause someone to experience difficulty breathing, increased blood pressure, or stomach irritation as just a few symptoms.

We all know many water utilities put fluoride in their water, though some fluorides are naturally present. After decades of fluoride use in Cypress’s water, concerns are still out there about how safe it really is.

Cancer.org notes the risks of fluoride causing cancer are still extant. No wonder so many Cypress residents want to remove fluoride with reverse osmosis systems.

As one of the most abundant natural minerals in the world, manganese is not dangerous when consumed in water at low doses. High doses can cause some serious health concerns.

Neurological issues in infants and children are one of the diseases linked to high amounts of manganese. Residents can tell if it’s in their water by noticing any black stains appearing around showers, toilets, and sinks.

When nitrogen combines with oxygen or ozone, it creates nitrate, another natural compound. High amounts of nitrate in drinking water is also a health risk.

Those with well water sometimes end up getting nitrate into their water due to poor construction or overuse of fertilizers. Significant amounts of nitrate in the water could become toxic, especially for infants and pregnant women.

Too much selenium in water is just as bad as the other contaminants above. It may cause hair or fingernail changes, nervous system damage, or general fatigue.

Can Residents in Cypress Benefit From Reverse Osmosis Treatment?

Sometimes, we run across those who don’t bother treating their water with reverse osmosis because they’ve continued to drink city water without issues. Contaminants could be doing unknowing damage to one’s health without anyone readily noticing until symptoms suddenly start.

Everyone in Cypress can certainly benefit from reverse osmosis treatment. The greatest benefit is treating one’s health with the utmost seriousness since medical bills can become very expensive.

Best of all, reverse osmosis removes as much as 99% of all total dissolved solids (or TDS). It goes beyond improving one’s health.

Take a look at these other benefits any Cypress homeowner or business should appreciate:

We all want water that tastes good. No doubt many residents here hate the taste of fluoride in city water. Reverse osmosis gets rid of it and helps water taste like it’s from a natural spring.

Kids or other family members who don’t drink enough water because it tastes bad to them can finally get great-tasting H2O. In turn, this improves their health by drinking more water, especially if needed to prevent dehydration.

Also, consider that kids will start drinking water more often rather than turning to unhealthy soft drinks to quench their thirst.

Placing high-quality water in food is also important and more healthful for everyone.

Restaurants now turn to reverse osmosis systems to ensure the water they put in their recipes is top-quality.

Save Money on Buying Bottled Water

The bottled water industry has made a fortune over the years from those who simply want better-tasting water. Now with reverse osmosis systems giving the taste of pure bottled water, residents don’t have to spend money on overpriced water brands.

Imagine how much money that saves per year when buying giant 12-packs of bottled water consumed in less than a week.

Maintenance on reverse osmosis equipment is relatively simple. All it requires is changing the filters every so often when they become dirty. Membranes also have to be replaced eventually.

On average, post-filters should be changed every year, depending on the water usage in the household.

How Often Should Residents in Cypress Replace Reverse Osmosis Prefilters?

Pre-filter systems are sometimes the complicated parts of reverse osmosis systems. Still, they need changing as much as the membranes and post-filters.

Our team recommends that residents change the pre-filter systems sooner than the post-filter systems. A good reason is they can get dirty faster since they pick up the most amount of contaminants during the water filtering system.

Everyone should change these filters every six months, or a year at most.

Keep in mind that pre-filters are not the only thing residents have to change to keep the system running optimally year-round. Membranes also need replacing, though not for at least two years, if not four. If hard water often comes through the system, changing every two years is more appropriate. If the water is soft, changing every five to seven years is perfectly fine.

Use a TDS meter to determine whether the membrane might need changing more often due to the signs of hard water.

Another thing to remember is that reverse osmosis systems have storage tanks that need draining fairly often. Be sure to drain every couple of weeks to avoid dirty water from building up.

Replacing the water often in the tank ensures it’s going to stay at its best quality.

Do You Need a Water Softener With Your Reverse Osmosis System in Cypress?

Hard water is sometimes an issue for residents here in Cypress. Some areas here have hard water listed at 200 PPM, which is far too high on average. When we do inspections of residential water systems, we often discover hard water is an ongoing issue.

No one wants to contend with hard water, even though it’s a natural process. It can also cause worse issues when it is combined with soap scum and hardens in water pipes.

Reverse osmosis systems can usually help with hard water thanks to the filters and membranes. For a more complete solution, having reverse osmosis and a water softener helps control hard water from ever being a problem.

We frequently recommend using a water softener in addition to the reverse osmosis system for more efficiency. A good reason is the RO system may wear itself out by having to constantly purify hard water. Using a water softener brings a balance to the two so residents don’t burn out their RO system earlier than expected.

Recent Requests We Received From Customers In Cypress, TX

A reverse osmosis system and/or installation.

Requesting for a water filter replacement.