Looking for an affordable septic tank company in Akron, OH? Great! Mr. Blue Plumbing is at your service 24/7. 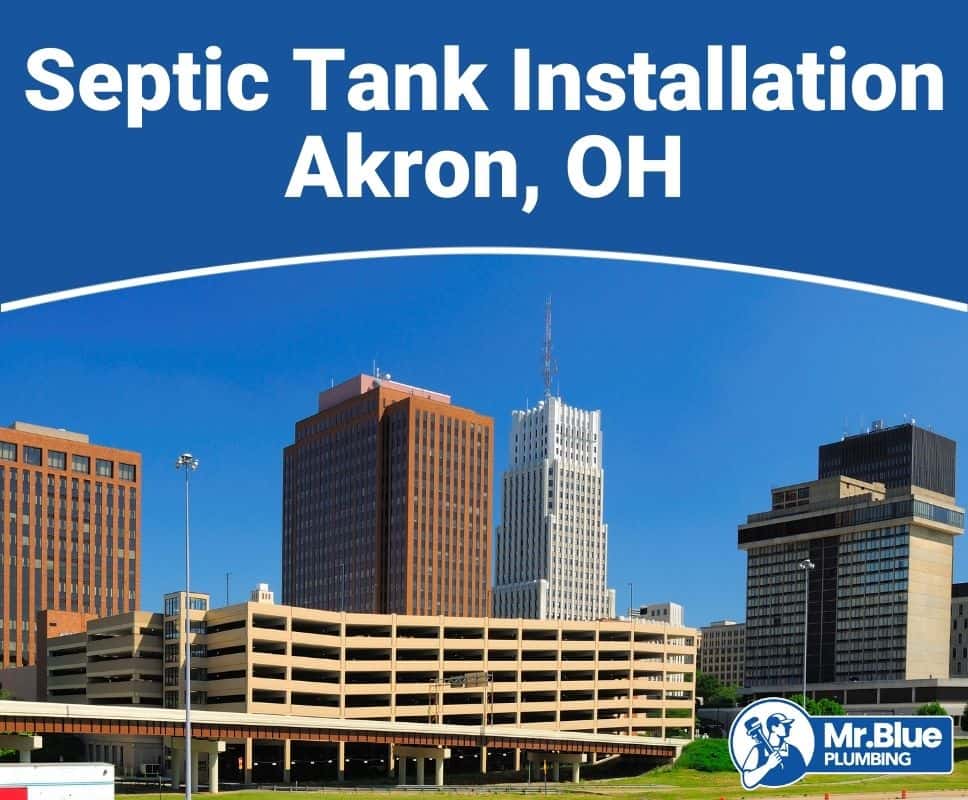 Tell us about your septic tank issue in the form and we'll get you connected with a Mr. Blue Plumbing expert in Akron today!

What Is the Process for Septic Tank Installation in Akron?

Rain is a part of life here in Akron, Ohio, including not being relegated to just the winter months. While the summers are usually average, rain can even fall in the driest months with 44 inches of precipitation per year. Based on this annual rain total, it’s easy to see why anyone living in rural parts of Akron needs a good septic tank system.

Installing one is a big expense and takes considerable time. Thankfully, numerous options are available, some of which are reasonable in price. Those who need to get a septic tank installed soon should know if they live near municipal sewer lines, it’s a requirement to hook up with them. Otherwise, living in rural areas away from city sewer lines requires a resident to use a septic tank to properly drain sewage.

To get started with installation, Akron residents need to schedule a percolation test – more simply known as a soil test. A soil study is important because soil needs to be permeable enough to properly drain wastewater into the environment. Even if the soil doesn’t pass the test, artificial soil can often be brought in to help with the installation process.

Next, residents need to get a permit for our team to get the installation going. We’ll look at the details on permits soon, but excavation can begin on the project once we have a permit.

It’s then when the recipient of the septic tank needs to decide what type of tank they need. Conventional tanks are the most common, albeit still taking a lot of time to install. Alternative systems also take more time in the design stage due to their mechanical complexity.

We install the tank and then call in the city inspector to sign off on the work. Once done, we can backfill around the area.

How Does Permitting Work for Installing Septic Tanks in Akron?

To get a permit for septic tank installation, Akron residents need to go through Summit County Public Health (SCPH). They provide the necessary applications to fill out, though keep in mind that most of the process is being done virtually. Due to recent threats of COVID, SCPH even decided to halt in-person soil evaluations until it’s safe to do so again. However, they still send out select soil scientists to conduct these tests on new properties.

Several forms have to be filled out to get the permitting process completed. First, a resident may need to fill out a Site and Soil Evaluation Form (SSE) before taking on the official permit application.

Fees are involved in the soil evaluation, with the most expensive being for scenarios where there’s a division of an existing parcel into five or fewer lots. Otherwise, most standard soil tests have fees around $150.

The permit application is either for a first-time install or replacement of a prior septic tank. It requires project details, the name and contact info of our team, plus a septic tank system description. Fees might run as high as $449 if installing an all-new tank.

Residents also have to draw out a rough sketch of the design plan. SCPH offers a form with a large box to create the freehand drawing. An alternative drawing form exists for a septic system already built. We can help with this process.

Turn in the permit either in person, via snail mail, email, or through an on-site drop box at the SCPH location, 1867 W. Market St.

How Much Does Septic Tank Installation Usually Cost in Akron?

Since so many things can minimize or maximize labor time, nobody can predict exactly what the final cost of a septic tank installation will be. Even bad weather can sometimes prolong things long enough to bring higher costs.

However, we can provide you with average figures. Most standard installation jobs in Akron cost around $6,300, with the lowest being $1,570 for an overly basic job. It could go as high as over $11,000 for more sophisticated septic tanks.

What else could determine the final cost?

Concrete is the most conventional material choice for septic tanks, mostly because it’s relatively inexpensive. It does have a few liabilities, however, including potential for cracking. It’s why some prefer to go with a choice like fiberglass, mostly due to its lightweight qualities.

Other choices include plastic and steel, both of which can wildly differ in the price tag. Steel is usually the most expensive of all due to its robustness. Whatever the final choice is, it goes by the personal opinion of the resident and what they think holds up the best. General climate conditions here in Akron might find most people preferring fiberglass since it doesn’t corrode as easily during intense rains and flooding events.

Size of the Residence

House size is a major cost factor because it stipulates what type of septic tank size a family may need. It might mean only a 750-gallon tank if living in a 1 to 3-bedroom home. A bigger home might need a 3,000-gallon tank.

Removing a Prior Tank

As seen with the permit application, sometimes septic tanks are installed to replace a worn-out system. Many rural areas here in Akron have old underground septic tanks that were put in decades ago. Some are so old, they no longer work.

Removing an aged septic tank is going to take extra time as our team pulls it out of the ground. Costs may go up considerably based on the complexity of removal. Hauling it away is another tough job, including finding a place for recycling.

Expect at least a couple extra days of work to get a prior tank removed before a new one goes in.

What Type of Septic Tank Is Best for Residents in Akron?

It seems new septic tank technology keeps being invented every couple of years. No longer are conventional tank systems the only option available if wanting more modern means to drain and treat sewage.

Still, the basic mechanisms behind a septic tank are always uniform, no matter what the technology is. In some cases, more complex systems are able to generate faster scientific principles to make these tanks break down wastewater.

A conventional system is one most households in Akron prefer. It still uses a standard tank, but also involves creating a drain field utilizing stone or gravel. Creating the drain field requires digging a trench, adding more work time. The soil in Ohio is generally supportive of this system, which is why most homeowners in the area choose it.

While our repair team appreciates the familiarity of conventional systems, we’re seeing other amazing septic system technologies like these:

Systems that Use Oxygen

Known as an aerobic system, we’re seeing more Akron residents choose this alternative septic tank simply because it uses oxygen to break down wastewater in a clean, faster way.

An air pump creates the oxygen, leading to the principle of oxygen-loving bacteria taking over to break down waste.

These are expensive systems, yet many prefer the faster waste breakdown process rather than rely strictly on nature.

During heavy rains in Akron, everyone appreciates faster drainage to avoid any potential for sewage flooding the grounds around a home. The pumps for these can be installed just a couple of feet away from the water table.

One of the most popular alternative forms of septic tanks is the use of chamber drainage systems. Putting these together is not too expensive thanks to the chambers being typically built with recycled materials.

Pipes help train waste to the chambers where the sewage comes in contact with soil. Since the chambers are usually surrounded by soil, microbes in the dirt help create a faster waste treatment.

How Often Do Homeowners in Akron Need to Have Their Septic Tank Inspected?

Everyone has differing opinions on when a septic tank should be inspected. Nevertheless, we should all adhere to the EPA rule of an inspection occurring at least every three years.

We usually recommend inspections by our experts a little more often than that, depending on the complexity of the system. As always, residents can also inspect basic things to make sure there isn’t any potential of bringing early mechanical failure.

Once our team comes to a residence to inspect a septic tank, the first thing we look out for is any sign of leaks, plus the water level. These tell us whether any pipes are leaking, or if the water is draining properly.

If those signs are definite, we’ll pump the tank. We then check for any backflow in the drain field area.

Visual inspections are a key to noticing many problems and making sure a resident doesn’t have a cesspool developing on the property. The more complicated aspects of the inspection include checking the water pressure in the resident’s home and placing dye in the water. Using dye helps determine how much water is really going into the septic tank.

Other detailed inspections include looking at the tank’s wiring to ensure it doesn’t have insect bite marks.

Are There Any Rebates Available for Septic Tank Services in Akron?

By now, all Akron residents know septic tanks are not inexpensive items to install. Finding ways to save money is understandable, especially when a family is low-income.

Our team works with many low-income families and tries to give discounts whenever possible. We also try to steer families to various state and federal programs that can help with rebates.

For instance, Ohio has a Household Sewage Treatment System Program helping low to moderate-income families replace failing septic systems. Only families living in Summit County can participate. Residents participating need to have homeowners insurance, be current on their property taxes, and have a citation from the Health Department. To implement this, residents should fill out the program’s PDF application form.

Recent Requests We Received From Customers In Akron, OH

Removing existing faucet and replacing with a new one.

Need a septic system put in at a new location.