Looking for an affordable well pump repair company in Cape Coral, FL? Great! Mr. Blue Plumbing is at your service 24/7. 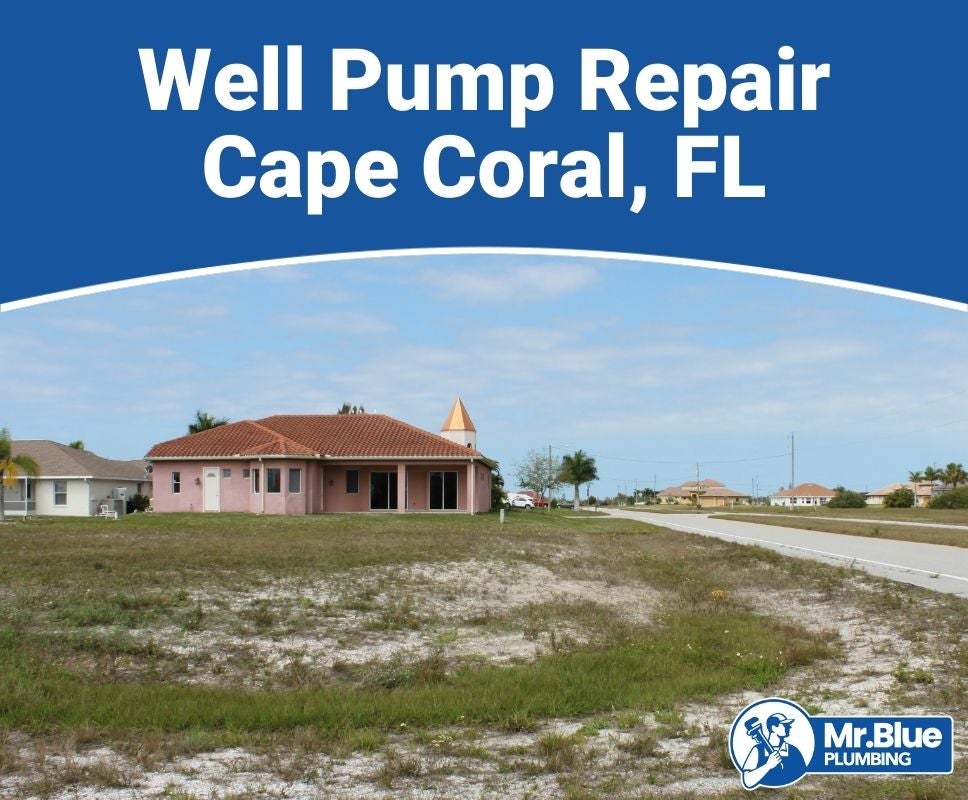 Tell us about your well pump issue in the form and we'll get you connected with a Mr. Blue Plumbing expert in Cape Coral today!

What Are the Most Common Well Pump Repair Issues in Cape Coral?

As the largest Florida city between Tampa and Miami, Cape Coral is like their nearby neighbors, with heavy rainfall during the year. While it can also get hot and muggy here, the precipitation totals are tremendous, making plumbing technology like well pumps easily malfunction.

According to statistics, over 12% of the Floridian population now uses well water as their main water supply. Taking care of a well pump is a big job, something difficult when inclement weather hits.

The weather isn’t always the culprit behind well pump issues, however. Usually, it’s just due to lack of maintenance and ignoring natural problems that can happen to the pump itself.

During drought seasons, low water might repair itself. More often than not, it’s a sign that something is wrong with the pump. As part of a chain reaction, it might start with the pressure switch going bad.

In most cases, a pump failure is due to the pump having to work too hard due to outside circumstances. A sure sign the pump has already failed is when a household can’t get any water after experiencing low water pressure for a while.

To keep awareness of things like this happening, inspections are essential. What should one check for to make sure the pump doesn’t fail sooner rather than later?

What Factors Cause Premature Well Pump Failure in Cape Coral?

Pump failure is the ultimate nightmare for well pump owners, and these mechanical breakdowns can sometimes happen weeks after installation. Certain circumstances can happen to lead to this.

A lower water table is usually one of the main signs something is about to happen to the pump. There might even be flooding going on above ground if a pipe happens to break first.

Take a look at other factors that could lead to a premature pump failure:

All well pumps have complex electrical systems to keep the pump running when needed. Wiring around the pump is also very complicated, often resulting in wires being compromised in some way.

One of the most typical is a wire without a watertight splice. Any wire exposed to water is going to create a possible electrical short. Even worse is the possibility of a resident experiencing electrical shock when inspecting the area.

Another problem related to wiring is simply not sizing it appropriately, something that can easily happen if a resident installed the well pump on their own. Improper wire sizing can lead to the pump motor failing all too soon. It’s yet another good reason to let a professional install the well pump from the beginning.

With wiring size being important, so is the pump size. Well pumps generally come either large or small. A larger household is going to want a larger pump to keep up with their water usage demands.

Not every resident bothers to think about those things beforehand. Getting a smaller pump could mean overworking it if using large amounts of water every day.

Likewise, an overly large pump might take up too much ground space and takes years to pay back if not really needed. This is why a professional ground and home inspection is good practice before the well pump is installed.

Not everyone who owns a well pump realizes sediment and sand can get into the mechanical workings of the pump and cause issues with the bearings. Some workarounds to this include creating more resistant system bearings that can resist exposure to sand and sediment.

Clogging can also happen from sediment or other contaminants. While Cape Coral’s water quality is considered generally good, the legal limits for contaminants have not been checked in over 20 years.

Hard water continues to be an issue for some homeowners, something wreaking further havoc on a well pump’s mechanics. A water test is a good idea before installing a well pump so water softeners can be placed in the water pipes. It’s an effective preventative to possible early well pump failure.

Increased Water Use from a Home Remodel

Sometimes just remodeling one’s kitchen or bathroom can increase water usage, leading to the well pump being strained. As convenient as a home remodel might be, it’s important to realize how it might affect water flow.

A water pump that is too small is just going to burn out from that excessive use, possibly within weeks.

How Much Does Well Pump Repair Usually Cost in Cape Coral?

We can’t give a resident a definitive, fixed price on what well pump repair is going to cost. With numerous variables at play, only ballpark figures are usually given.

According to most estimates, residents should expect to pay $761 to fix a shallow jet pump. Repair costs could go much lower if you’re just getting a pipe clog fixed. A more complicated submersible pump could cost closer to $1,000 or above to repair.

It’s worth noting that one of the major parts of a well pump is the pressure tank. As a separate part from the pump, having it go out is going to add to the general repair cost.

The pressurized storage tank is where the water in the pump is delivered. Many problems with the pump usually stem directly from the pressure tank going bad.

Jet pumps are far more affordable, which is why they’re usually purchased first by homeowners. They’re typically placed at a more shallow level in the well, though, making them vulnerable to low water tables.

Replacing a jet pump won’t cost as much as a more complex submersible pump. With submersibles placed deeper, it’s going to cost more money to lift them out of the well for inspection and repair. Add additional cost for placing it back into the ground.

In scenarios where low water levels are a problem, it might require us to lower the pump farther into the ground, requiring another day of labor time.

Our team sees too many residents attempt to fix their well pumps on their own to try to save money. Without proper knowledge of how these work, no one is going to be able to fix an issue right without it falling apart again.

We see too many people attempt DIY fixes, then discover their tinkering caused more damage that costs them more money. Don’t be one of those who discover this cost factor by shock.

How to Avoid Costly Well Pump Repairs in Cape Coral?

Inspections should be scheduled twice per year to make sure nothing is missed, creating a costly repair bill later. Having an inspection done is especially important after inclement weather hits the Cape Coral region.

Heavy rains from hurricanes can truly cause some serious damage to well pumps which should be addressed immediately. Other things should be carefully looked at as well. These things are what our team looks for during a routine inspection:

Another major issue residents frequently overlook is the danger of pesticides or fertilizers getting into the well pump. This is as bad as the other contaminants mentioned above.

There should be a clean zone of at least 50 feet away from the well with these chemicals, including paints or motor oil. We sometimes find that these chemicals manage to get into water wells due to carelessness.

Each chemical can get into the system and cause further mechanical failure, not including causing major illness to families.

We’ll also look at the well cover (or cap) to make sure it’s on securely. Once in a while, we discover it wasn’t attached properly during the initial installation.

We also inspect the cover’s seal since that helps prevent insects or mice from getting inside and chewing on the wiring. Ignoring this over a long period could lead to some serious electrical repair jobs.

Doing a flow test is also essential since it helps determine the system’s output and whether it’s functioning properly. Water level tests are usually conducted at the same time to determine if any mechanical defects are happening.

All well pump equipment should meet local code requirements or face the potential of city fines along with big repair bills down the road.

When Do You Need Permits for Well Pump Repair in Cape Coral?

No matter where one goes in America, permits are usually a given when it comes to any plumbing job. In Cape Coral, a permit is required before any well pump repair takes place.

To get a permit, residents have to go through the official city website for Cape Coral. They have a page devoted to permits for well pumps, which starts by filling out an owner’s authorization form. The contractor has to fill this out on behalf of the homeowner. The resident also has to fill out a section at the bottom confirming the contractor’s info.

On the permit itself, more details are needed, including many technical details about the type of well pump being installed. Some of this involves estimated well depth plus the type of casing material used.

At the bottom of the permit, residents have to draw a basic sketch of the well pump location. A few important details are required here, including roads or landmarks if nearby. Also needed are distances and reference points to other nearby plumbing equipment.

After the permit is completed, residents have to fill out a well completion report. More installation details are needed here, like the pump’s water level and grout thickness.

Recent Requests We Received From Customers In Cape Coral, FL

Just bought a house and need the well water system checked out. Cleaned and sanitized.

Just bought a house and need the well water system checked out. Cleaned and sanitized.

My water smells like rotten eggs no it's not because of hotwater heater.

No water coming from well, started with low pressure, then quit completely.

Well pump has died I think and no water is coming out of the faucets.