Looking for an affordable well pump repair company in Titusville, FL? Great! Mr. Blue Plumbing is at your service 24/7. 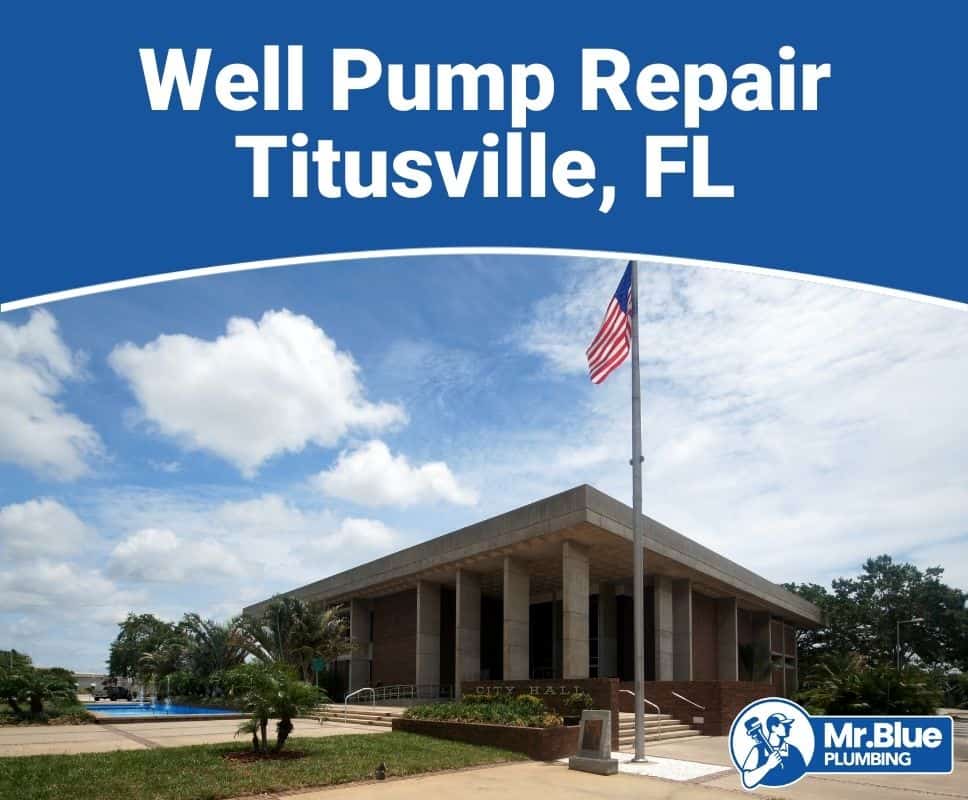 Tell us about your well pump issue in the form and we'll get you connected with a Mr. Blue Plumbing expert in Titusville today!

What Are the Most Common Well Pump Repair Issues in Titusville?

Welcome to Titusville, FL. The list of things to do here is endless. According to Visit Florida, “One of the centerpieces of Florida’s Space Coast, Titusville is the only place on the planet where rockets launch, sea turtles nest, and soothing sunrises give way to inviting surf.”

It’s the perfect place to either go and have a fun night in the town or lay on the beach and relax. Titusville even has its own local delicacy known as rock shrimp for anyone who has a taste for all things seafood.

There are some residents who enjoy the crisp, clean taste of their own well water, and prefer it over water provided by the city of Titusville. With that being said, there are a few issues you need to be on the lookout for if you have a well.

Many horror movies have at least one scene where someone turns on the pipes and brown, murky water comes pouring out. This is probably because no one enjoys taking a bath in dirty-looking water and it causes more problems for well owners than it does for anyone hooked up to city water. Seeing water that has some color to it means that there is something wrong with your water supply and it needs to be addressed.

Water that pulsates or sputters when you turn on the tap is never a good sign. It could be something like trapped air in the pipes. Another possibility is that the pipes are failing, or that the tank’s bladder has finally given up. This will require that the tank be replaced.

Getting the electric bill in the mail is never fun unless you just like receiving bills. It’s even less fun when you see the cost is steadily rising. There are steps you can take to address this such as washing a larger load of clothes as opposed to several smaller ones, turning off the lights when not in use, or using more eco-friendly appliances.

If you try all this, and it’s still not working, it might be time to take a look at your well. If the pump is getting ready to go out, or simply isn’t working efficiently, it may continue to run, which in turn raises your power bill. It’s designed to cut off from time to time, but if something is wrong, then this doesn’t happen. There are several reasons this could be taking place, such as the pump is not building up enough pressure to work efficiently. This could be caused by a pipe with a leak, bladder issues that make it cut off too soon, and a broken water line between the well and your home.

If you turn on the tap and nothing’s coming out, it can be very frustrating, especially if you need a quick shower before a very important meeting. The first thing you should check is the circuit breaker, to make sure it’s still on. If that’s not the problem, then try checking the well’s pressure switch. It can sometimes fail, which means no water for you.

Another potential problem could include a loss of power to the well, or a controller that failed. If none of those is the issue, then it’s possible the well has run dry, which means we will either have to dig deeper in search of water, or dig a new well.

What Factors Cause Premature Well Pump Failure in Titusville?

There are several factors that can cause your well to stop working long before it should. On average, a well tends to last anywhere from 10 to 20 years. However, this isn’t a guarantee.

It’s important to make sure the water you drink and bathe in is both clean and free of pathogens. That’s why it’s recommended you get your water tested at least once a year by our professionals to make sure there are no contaminants in it.

According to the CDC, “Coliforms are a group of bacteria found in plant material, water, and soil. Coliforms are also present in the digestive tracts and feces of humans and animals. Most of the time, these bacteria are not harmful.”

A positive test for coliforms isn’t necessarily a bad thing, as they are naturally occurring bacteria in Titusville. This is a good indicator that your water is being contaminated with soil or feces, which warrants some investigation. While it’s not common, it could be possible that your water supply is being contaminated by animal feedlots, pastures, or even septic tank leakage. It also means that you need to have further testing done to make sure that it’s not E-Coli.

With that being said, the CDC stated that the chance of people becoming infected with E-Coli from their water supply is rare. Most people who become infected do so by eating raw or undercooked food. Even so, it’s better to know what’s in your drinking water.

Water that comes straight from the ground in Titusville will most likely have more minerals in it than water that comes from the city. This isn’t always a bad thing, as well water often tastes better than what comes out of a city tap. However, it can be an issue if you have hard water, which is very common in the area given the organic material in the soil.

Some of the minerals you may find in your drinking water are calcium and magnesium. While these are actually good for you, as many humans don’t get enough in their diet and suffer a deficiency, it’s not so great for your pipes.

The minerals can tend to build up over time, which means less water coming through your pipes. When the well is new, this obviously shouldn’t be an issue, but as the well and pipes age, the buildup will only continue to grow.

Iron is also a major issue for water in Titusville. According to the city of Titusville, “Iron concentrations above 0.3 milligrams per liter and iron bacteria can cause staining of plumbing fixtures and laundry”. Once again, it’s not exactly a health problem but it can cause issues for your pipes.

How Much Does Well Pump Repair Usually Cost in Titusville?

Repairing a well isn’t always easy or cheap. With that being said, there are several factors that will determine the final cost of repair.

Titusville, FL is prone to floods throughout the year, so if you need a well dug or repaired, this will play a role in the cost. While it’s always nice to dig through soil that is soft from recent rain, too much rain can make it dangerous. It’s better to wait until the rainy season is over, but if you must have your well repaired, it will cost extra to do it when there is a high potential for flooding.

Deep wells often make sense depending on the location, but the city of Titusville isn’t exactly known for its dry seasons. With that being said, it’s often possible to dig wells that aren’t as deep. If you do need a deeper well, however, it will increase the costs.

Digging a deeper well means drilling deeper into the ground. This will require that more earth be removed. It also means that you’ll have to have a deep pump installed/replaced, which will cost more than a shallow pump.

The type of pump you choose to have installed will play a huge role in the final cost. Some wells have greater horsepower, which means you get water at a greater rate, and more efficiently. This will increase the cost over a pump that can’t pump as many gallons per minute.

Jet pumps tend to be the more popular option, as they’re cheaper. They’re also easier to remove in the event that it needs to be replaced because they sit on the surface. This makes it easier to check and make sure there are no obvious maintenance issues.

A submersible pump is also a good option because it is installed in the ground. It works more efficiently than a jet pump, as it doesn’t have to fight gravity to pull the water from the ground. They must be submerged in water in order to work.

How to Avoid Costly Well Pump Repairs in Titusville?

Being proactive regarding maintenance can go a long way towards making sure you don’t have huge repair bills later on. It’s recommended that you contact us for well pump maintenance at least once a year. This will involve PH tests, checking for contaminants, and checking the well pump to make sure it’s still working properly.

While it’s recommended to have our professional plumber come take a look annually, there are some things you can do yourself between our inspections. Look carefully for things like standing water, drips, rust on the tank, or anything that looks worn. As you move around, listen for a ticking noise. This will indicate that something is rubbing together. A hissing sound could mean the bladder is failing.

When Do You Need Permits for Well Pump Repair in Titusville?

The city of Titusville does require that you get a permit for many plumbing tasks, but it doesn’t specify that it has to be for well repairs. With that being said it’s not a bad idea to call the permit office and ask just to be sure. Laws are often changed and you don’t want to get hit with a fine because an existing law was tweaked.

Recent Requests We Received From Customers In Titusville, FL

The second well was for watering the yard. The pump stopped working about a year ago and our father never replaced the pump.

We have a well and pump we need to get working again. We have one pump that handles our air conditioner.

Moving into home with a well. Need an inspection and recommendations... while house filter?

Don't like city water, wondering what it would cost for well.

We would like to get Old pump started again. Thanks!