Looking for an affordable well pump repair company in Vero Beach, FL? Great! Mr. Blue Plumbing is at your service 24/7. 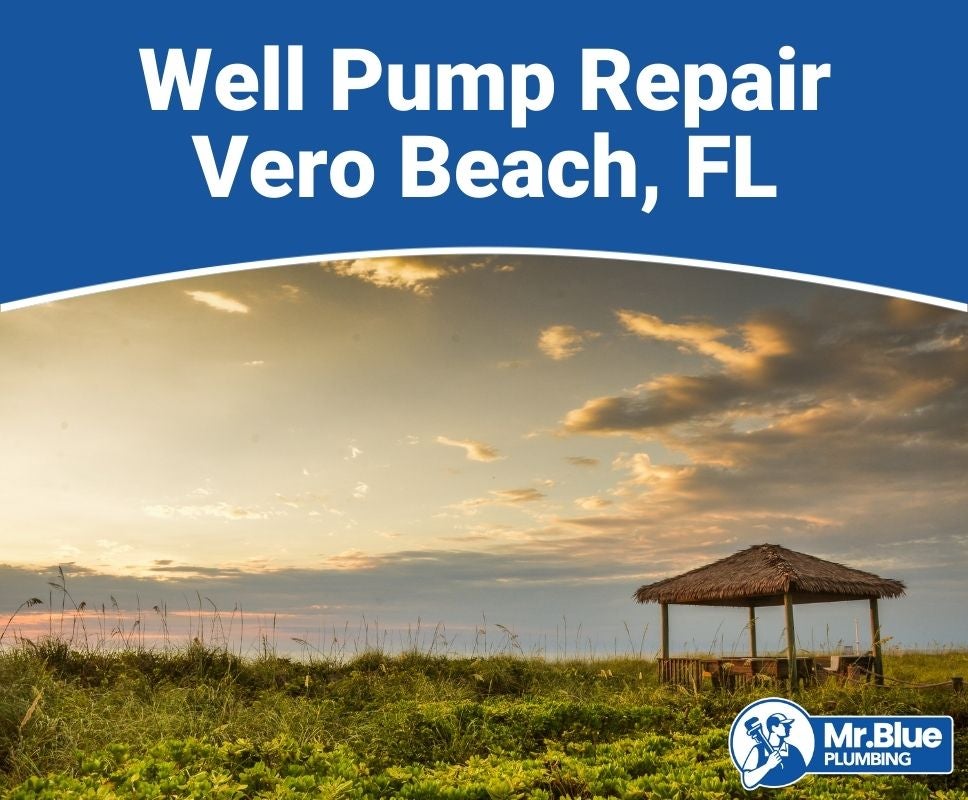 Tell us about your well pump issue in the form and we'll get you connected with a Mr. Blue Plumbing expert in Vero Beach today!

What Are the Most Common Well Pump Repair Issues in Vero Beach?

More and more residents of Vero Beach, Florida are beginning to rely on well water as the main water supply in their homes. With sometimes up to 47 inches of rain here per year, it’s also important to make sure those residential well pumps are working and not prone to an early breakdown.

So many things can potentially go wrong with well pumps due to their mechanical complexity. When one breaks down, it can become a major inconvenience for Vero Beach families who need well water during the city’s hottest months.

While the weather can sometimes play a part in well pump issues, it’s sometimes caused by a lack of maintenance by the owners. One of the first signs something is wrong is when residents discover they have a low water pressure or no water at all.

This is usually a sign that the pump is failing, or even the well is having a problem. Droughts can also cause water to dry up in the well, even if nature isn’t always to blame.

When the pump fails, it can do more than just lower water pressure. It can also turn the water into a muddy mess. What usually causes pump failure is when it’s forced to run constantly due to something else related. In many cases, this means pressure switch issues create a domino effect of low water, hence the pump working overtime.

Having a more astute awareness of what’s going on in a well pump is an important step in weeding out the potential of extensive repair. Numerous things can be inspected on one’s own, though we also recommend a professional inspection.

What Factors Cause Premature Well Pump Failure in Vero Beach?

A well pump could easily have an early failure just weeks after installation if not checked over carefully. Pumps working overtime can certainly be one of the major aspects of premature failure, but so can the breakdown of the water tank.

Residents may know when the water tank goes out based on the sign of dirty water. Also, water may “spit” out of taps inside the house.

These two things are what we look for when we come to do an inspection of a well pump. Although other things can certainly go wrong, we’ll immediately scope out:

Any big home intending to use more water needs a larger pump. Every Vero Beach resident should consider this first before doing a well pump install. However, we find many residents either overestimate or underestimate the pump size.

Most common is the problem of the pump not being big enough. The pump overworks itself from trying to keep up with the overwhelming amount of water a larger household is sure to use.

A pump that is too large could also be a waste of money, not including taking up more land space a household could use for something else.

Clogs in the pump are another common problem we see that can burn out a well pump in days. It’s mainly caused by sediment buildup in the water supply. Vero Beach’s water has been known to have contaminants in the past, leading to minerals occasionally building up (unknowingly) in water wells.

Other times, the culprits for clogs are just dirt or small stones getting in the water.

Another common problem we see is well pumps never drilled far enough down, leading to aquifer depletion. A major first sign of this problem is losing water pressure intermittently throughout the day.

Often, residents get confused by this fluctuation in water and just assume it’s something eventually correcting itself. The only way to get it fixed is to have the recharge rate equal to that of the rate of the pump.

This might require digging the well deeper into the aquifer bedrock. Otherwise, it’ll just make the pump work overtime once again, leading to early mechanical failure.

How Much Does Well Pump Repair Usually Cost in Vero Beach?

There isn’t any resident or professional that can give a definitive figure on the final cost of well pump repair. With so many variables involved, only basic averages can be given.

According to most average stats, one can expect to pay in the ballpark of $900 if repairing a standard jet pump. Submersible types cost a lot more to repair, often up to $2000, depending on the problem.

On occasion, the simplest repair might cost as little as $200, usually in fixing clogs. Regardless, other factors are often at play in total cost:

Upgrading to a Submersible Pump

Jet pumps can easily fail after a time and even after maintenance. Many homeowners find rather than replace those, going with a submersible pump a better bet.

Submersibles are definitely higher quality, yet more expensive due to their mechanical sophistication. Even though these do cost more, residents can save money in the long run since submersibles self-prime, create faster pressure, plus have more energy efficiency.

A couple of well pump types exist beyond jet pumps and submersibles. It’s also possible to install one running strictly on solar energy. Pumps like this are far more sophisticated and will up the cost, not including the upkeep of the solar panel technology. In addition, cloudy weather can affect performance.

Some prefer shallow jet pumps that sit above ground and draw water through an inlet pipe. A well only 25-deep could utilize this pump type. A shallow pump may need expensive boosters on occasion, though, to keep the water pressure consistent.

Replacement of Other Parts

During an inspection, we might discover a resident’s water pipes are too corroded and need replacing. An unexpected discovery like this could up the well pump repair exponentially.

Pressure tanks are usually the other component needing replacing beyond the pump itself. Expect to see an additional $500 replacing these, not including another $1,500 if the pump is also burned out.

Our team always hopes to find just one thing needing a fix during our inspections. If a well pump hasn’t been inspected in a long while, more things could potentially be found.

How to Avoid Costly Well Pump Repairs in Vero Beach?

Based on the heavy rains Vero Beach gets from hurricanes and other tropical storms, it’s a good idea to have a well pump inspected every year. Avoiding costly repair is going to mean putting in as much maintenance as possible.

There isn’t anything wrong with residents checking their own well pump to see if anything looks amiss. Still, we recommend our team doing a professional inspection to look out for these things possibly going unnoticed:

As robust as one might think a well pump motor is, the evidence is clear they can burn out when overused. It’s the first thing we check during inspections, along with the pump wiring.

Doing a test on the amp load and the grounding is also important to determine any electrical issues. Something as simple as underground insects chewing on wiring over time could cause a short.

Conducting a check of these items are things otherwise going unnoticed by a homeowner since they don’t show immediate signs above ground.

Checking for Odd Noises Coming From the Pump

One bad thing about a submersible pump is it’s often so far down in the ground, no one can hear if any strange noises are emanating. Our team always checks for noises coming from the pump, including the sound of clicking or banging.

Any of these sounds could indicate mechanical problems are developing with various small parts.

Checking For Other Contaminants

Any type of contaminant in the water can affect the well pump as already seen. Other contaminants can cause just as many major disruptions. Paints, fertilizers, and even pesticides used around one’s property can lead to contaminants getting into the water system.

We always check carefully for this, including making sure that the said contaminants don’t get into the drinking water, potentially affecting a family’s health.

A sure sign something is wrong with a water pump is when a resident starts getting inexplicably high utility bills. Take action immediately in scheduling an inspection if noticing high water bills for more than one month.

When Do You Need Permits for Well Pump Repair in Vero Beach?

Just about every city in the United States requires a permit to get a well pump repaired. All Vero Beach/Indian River County residents have to do the same through the Florida Department of Health.

FDH states anyone who plans to construct, repair, or abandon a well less than 6” must obtain a permit from their office first. Either the owner of the property or the contractor doing the work can submit the application for the permit.

The Florida Administrative Code rules need to be adhered to carefully by all contractors, which makes reading the rules important beforehand.

To fill out the permit application, one has to fill out the location of the well, the owner’s info, and the contractor’s info. Many other details are required, including the type of work involved, how many wells are being installed, plus the intended use for the well.

Other parts of the application require further detailed info on the pump type, like the primary casing material, and proposed grouting interval. At the bottom of the permit, the applicant needs to draw out a basic sketch of the property to give an idea of the proposed location.

After the installation or repair is complete, residents need to fill out a Well Completion Report Form. It asks many of the same questions as the permit application, not including asking more information about the pump type.

Recent Requests We Received From Customers In Vero Beach, FL

No hot water comes out of the faucet in the downstairs full bathroom tub. Sink hot water is fine.

Shower done 2yrs ago pooling water / drain is good pitch of flooring not.

Hello: I would like a quote to install a well for home irrigation. Thanks.

I need the bottom floor replace how much will that cost me.