Looking for an affordable well pump repair company in Clayton, NC? Great! Mr. Blue Plumbing is at your service 24/7. 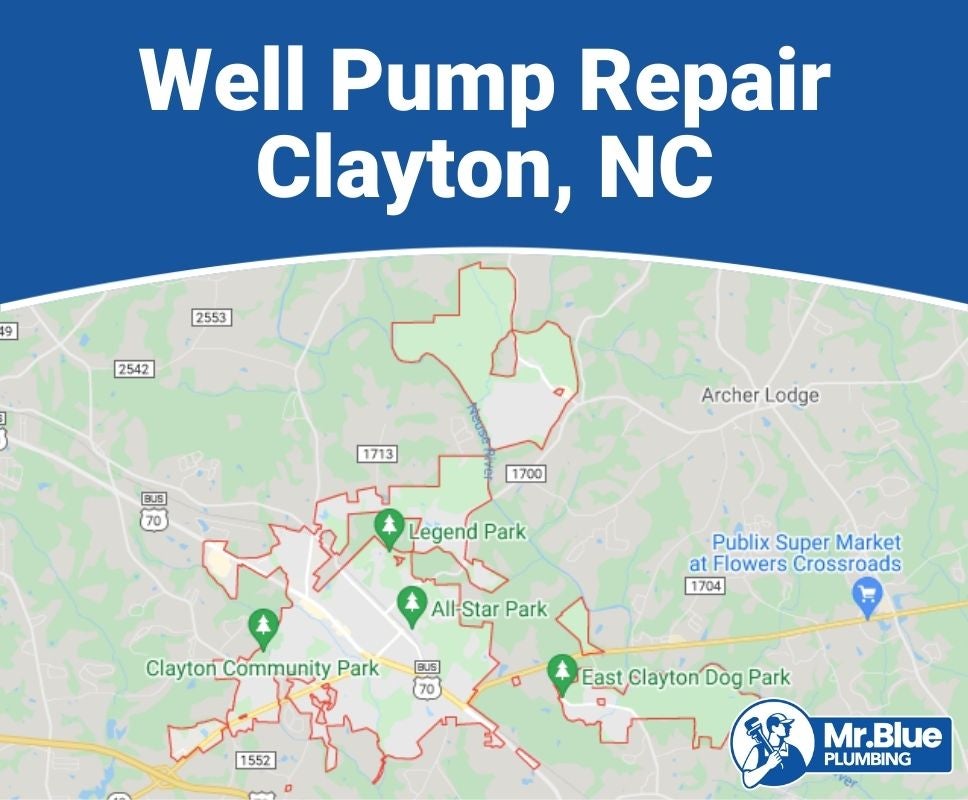 Tell us about your well pump issue in the form and we'll get you connected with a Mr. Blue Plumbing expert in Clayton today!

What Are the Most Common Well Pump Repair Issues in Clayton?

Based on the rainy climate here in Clayton, North Carolina, a well pump could very easily malfunction based on the singular problem of flooding. However, the weather is far from the only thing potentially making a well pump break down.

Many other things can happen that lead to well pumps needing major repairs, usually from just lack of maintenance. No family relying on well water wants to go without water for more than a few days either if not attached to city water lines.

One sure sign something is wrong with a well pump is low water pressure. This might mean a few things, but all residents should request an inspection if water pressure continues to be low. It typically means the pump is beginning to fail. Also, it’s perhaps a sign of the well itself needing repair.

Another sign of pump failure is getting dirty water through the taps in the house. What usually leads to pump failure is the pressure switch going bad. Or, it could be a wiring issue due to hungry insects.

All of these create a cascading effect, burning out a pump all too easily. The initial cause of the pump wearing out is it’s forced to work overtime when not functioning properly. In many cases, not getting any water at all in the house is a sign the pump has already failed.

Other times, the main problem is a direct plumbing issue like clogged or broken pipes.

Most important is to have a continual awareness of anything going wrong. Ignoring various signs can very easily bring a premature well pump failure, requiring complete replacement.

What Factors Cause Premature Well Pump Failure in Clayton?

Many noticeable signs can come up indicating pump failure is happening sooner than later. This can really happen mere weeks after installation due to certain circumstances.

Power loss may be one major sign, not including a low water table if the pump is underground. Flooding might also be occurring somewhere on the property if a water pipe happened to break.

These other factors can bring an early well pump death as well:

The Pump Size Is Too Small or Large

Before installing a new well pump (or replacing an old one), it’s a good idea to estimate what size it should be. It should go on house size and how much water a family intends to use per year.

Basically, all well pumps should be sized based on the size of the house’s plumbing system. How many faucets does the house have and how many appliances are going to use water?

Not bothering to estimate this can lead to the pump being too small, hence probably overworking itself. Likewise, an overly large pump could become a waste of money and space.

Think about the pressure tank as well and how large it should be. These tanks are also sized based on the water amount usage in a home. A pressure tank helps take the load off the pump itself so it doesn’t overwork itself.

Creating the perfect balance where the pump only turns on a few times during the day keeps the pump from burning out so fast. Any pump or pressure tank working constantly day and night could fail in weeks, no matter the initial condition.

Any signs of sputtering water through the taps in the house (or even a bad water taste) are usually signs of a low water table. A drought might be the reason for the water being so low. Regardless, it may not be the issue entirely. Perhaps the pump just wasn’t placed low enough in the ground to reach the low water table level in the area.

If this is the case, it might require us to lower the pump farther into the ground. Ignoring this problem will only overwork the pump once again. Just remember to consider this before installing a new pump in the same spot.

Sediment in the Water

Contaminants in water are always a big problem for well pumps. While the water quality in Clayton is generally good, sediment can always get into the water supply, and mineral content is generally high due to the organic material in the soil. When it does, it can cause clogging in the pump, leading the pump toward a gradual mechanical failure.

Sediment might not seem like a big deal, yet it has an abrasive quality wreaking havoc on the bearings of the pump. Hard water, in general, is a major problem for all well pumps, something needing scoping out in the first year of the pump’s operation. The same goes for making sure small stones don’t also cause similar clogs.

How Much Does Well Pump Repair Usually Cost in Clayton?

Most residents will never find a definitive answer to what the final cost of well pump repair is. Only ballpark estimates can be mentioned based strictly on common issues. All repairs are different, and the circumstances behind them can be varied.

Take a look at a few other factors that may lower or raise the final bill:

Installing a new well pump might be more difficult for our team if the yard terrain is challenging. Some residents in Clayton still live in rural areas where the ground might not be entirely flat. The soil might also be a problem, requiring the use of artificial soil to compensate.

When the terrain is rougher, it may require us to bring in extra equipment to get the pump properly installed. Increased labor time is always going to add more to the cost, especially if taking several days to get everything completed.

Any well pump that’s put deeper in the ground is going to cost more because of the extra digging/excavation involved, plus the complexity of installation. Shallow wells are still popular with residents, especially jet pump types based on their affordability.

More people are also wanting deep well pumps, including submersible ones. Since these can help draw water better, it’s no surprise why our team installs them more often. Yet, they do cost more, particularly the submersibles.

Expect to pay up to $500 more for a submersible deep well pump with a powerful motor.

The Type of Pump

Jet and submersible pumps are only two kinds of well pumps dramatically affecting cost. Improved technology is allowing other types to come to market, like those controlled by solar power.

Even double drop jet pumps are becoming more popular thanks to their sophistication in making jet pumps work a little differently.

How to Avoid Costly Well Pump Repairs in Clayton?

Maintenance is an absolute must on well pumps if still many debates on how often it should be done. Our experts think twice per year is a good idea, including after times when Clayton experiences inclement weather.

No one says residents shouldn’t inspect things on their own, despite a professional installation being more thorough. Our plumbing team can do inspections by checking for various things to prevent future costly repairs:

We always check for this first since it’s an immediate tell on something being wrong. When it’s clear the water is too low, we’ll pump the tank. We’ll also check the water level during the pumping to make sure it’s ok.

Sometimes, low water levels are just due to low rainfall amounts. If so, it’s a better sign of things to prevent a high repair cost bill. All Clayton residents need to remember not to ignore water level problems and assume it’ll correct itself.

The evidence of sediment in the water above is only part of the potential for causing hard water issues. Over time, this can build up with other minerals like iron and sulfides.

We usually check the quality of the water during the inspection to ensure it won’t cause future problems. Hard water can easily be overcome by using a water softener.

We’ll also check to see if any other contaminants are getting into the water from sources like the use of pesticides or fertilizers. Looking at how the water looks and smells also tells us a lot.

Looking At the Well Cap

A well cover or cap might seem like an unimportant part of a well pump. Our inspection team also examines these since a worn-out cover could create problems for the pump in short order.

Other times, the cap may not be attached properly, leading to additional things going awry.

When Do You Need Permits for Well Pump Repair in Clayton?

Nearly every U.S. city requires permits to install or work on well pumps. Only a few exceptions might apply. In Clayton, its residents have to go through the Engineering & Inspections Department to gain access to permits.

It’s easy to look up any permit status filled out online by typing in the permit type, the permit number, and the homeowner’s address. Two different portals exist to check in on permit statuses: one for residents and another for the contractor.

Keep in mind the city of Clayton wants all residents to read their inspection policies and procedures before a permit is granted. An inspection has to take place to make sure the land is suitable for a well pump.

Remember, each inspection checklist has to adhere to the NC Residential Code.

Recent Requests We Received From Customers In Clayton, NC

I am a Real Estate Agent looking to have an inspection of perhaps three wells on a property in Clayton.

Inspect well...not working correctly. Please give me time to answer the phone...thank you.

Trying to get frozen well back up. At well head a blow off is open and I can't get it shut off.

Check on well. Could need repairs after thaw.