Looking for an affordable plumber in Broken Arrow, OK? Great! Mr. Blue Plumbing is at your service 24/7. 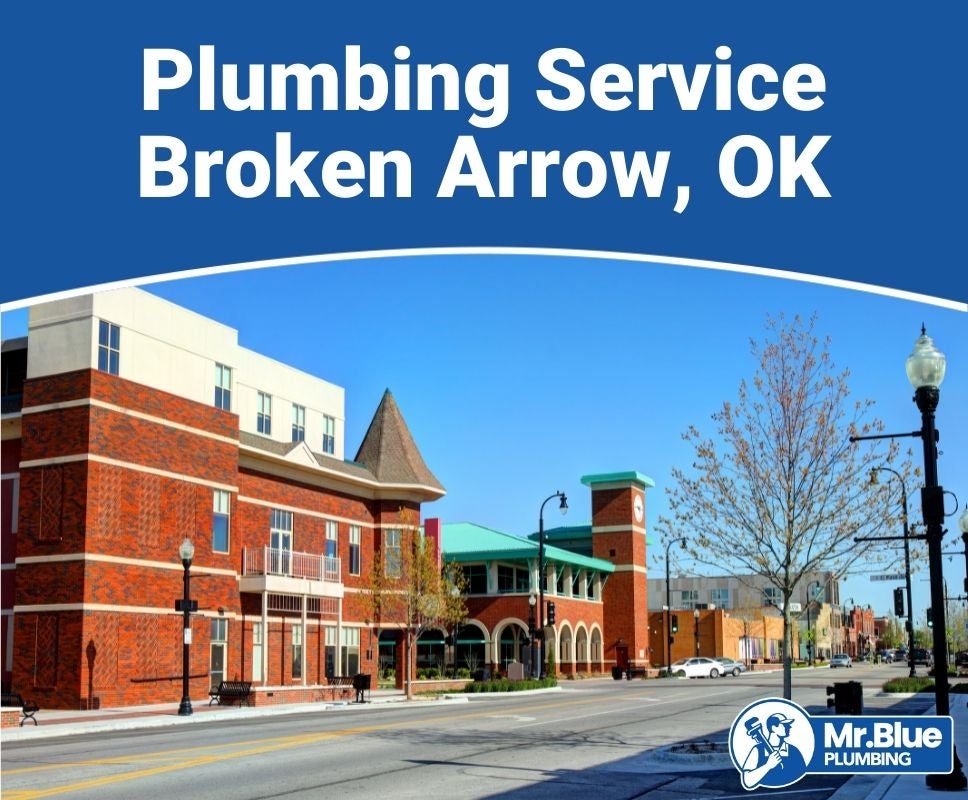 Tell us about your plumbing issue in the form and we'll get you connected with a Mr. Blue Plumbing expert in Broken Arrow today!

What Are the Most Common Plumbing Issues in Broken Arrow?

Most household plumbing issues are in the kitchen and the bathrooms, where the water lines go. Leaky faucets and pipes, clogged drains in sinks and showers, running toilets, and low water pressure, or insufficient hot water are the most common problems. Pipes do break occasionally and require a large repair job, but most plumbing issues in Broken Arrow are fairly mundane.

Plumbing issues are a reality in an aging home, and even a new home starts aging right away, just like a new car. Some problems are an easy fix for even the least experienced DIYer, replacing the flap on a running toilet, for example. Cleaning out a clogged drain is pretty simple too, although kind of gross. Most plumbing concerns, though, are best left to the professionals. You can cause more damage than the original problem if you don’t know what you’re doing.

How Does the Water in Broken Arrow Affect Your Plumbing?

You probably don’t think much about the water coming from your pipes in Broken Arrow – you turn on the tap and make a pot of coffee or hop in the shower. The water is fine to drink, so why would you think much about it?

The water in Broken Arrow and the Tulsa area is ranked “moderately hard” to “hard” on the national water hardness scale. In real-life terms, this means that mineral content in the water, particularly calcium and magnesium, makes it tough on pipes and water heaters. The minerals aren’t an issue until the water flows into the water tank, and when it’s heated they dissolve and sink to the bottom, creating a layer of sediment. The sediment builds up over time, making the heating elements work harder and longer to heat the water through that layer in the tank. Your energy usage goes up and you blame it on the water heater rather than the water, and the cycle continues. Professional plumbers recommend flushing the tanks yearly to remove the accumulation of sediment.

The US Geological Survey (USGS) compares hard water to cholesterol buildup in your arteries. Eventually, the pipes get too clogged to let the water flow through. So the hard water we have here in Broken Arrow can also damage your pipes.

Do you know that pesky white residue that builds up around your faucets and fixtures? That you can’t seem to scrub away no matter how hard you try? And the water spots that just won’t come off your glasses in the dishwasher? That’s a sign of hard water – they look like chalky spots because that’s exactly what they are – calcium buildup on the glass and metal.

Magnesium also builds up in the pipes, so the area for water to flow through is constantly shrinking. The results are a mineral clog that will eventually block the line altogether. When this happens, the block in that part of the line creates problems elsewhere, leaks in the lines, and increased water pressure along other areas of the pipes. These seemingly minor issues lead to the big ones, damaged plumbing fixtures, and burst pipes are just a couple. They are also more expensive to repair since you have to address the supply lines instead of the drain lines.

In an interesting twist, research appears to prove that really hard water can be beneficial to your health in ensuring you get enough calcium and magnesium.

Believe it or not, your water’s pH levels also impact your plumbing and pipes. pH is the measure of the water’s acidic or alkaline qualities, and the greater Tulsa area has a pH level between 7.4 and 8.7, making it fairly alkaline. A 7 is considered balanced, not too much of either. While acidic water can erode the pipes, alkaline water has its own problems. It tastes funny or even has unpleasant side effects that include nausea, gastrointestinal problems, tremors, and confusion.

You can install a water treatment system in your home to balance out the pH levels, saving both your pipes and your health.

How Much Does Plumbing Usually Cost in Broken Arrow?

It’s hard to predict how much you’ll pay a plumber in Broken Arrow without knowing the specifics of the job. Unlike electricians or carpenters, plumbers don’t generally charge an hourly rate – there are too many variables in every situation. Instead, they will quote you a flat estimate based on labor and parts necessary.

Some plumbers have an advertised flat rate for basic jobs like installing toilets or faucets. For a sink installation with existing plumbing, for example, you might pay $150 and up for the sink, and another $75 for the faucet, plus the cost of the materials.

The single biggest factor in figuring out what a plumbing job will cost is the labor involved. That’s why a plumber will charge a flat rate for a simple task that they can knock out in under an hour. A more complicated job estimate will break down the anticipated labor costs and the cost of parts. If there is travel time to pick up parts or shipping costs, expect to pay extra for those.

When you call for service also impacts the cost of service. Pipes hardly ever burst at a convenient time, but they do need immediate attention to avoid further damage. Calls during regular business hours will get you standard rates, but on nights and weekends, you will pay a premium. Having a plumber clear out a drain will cost about $150 during normal hours, and up to $500 on Christmas Eve.

Whether the work is indoors or out is another major consideration. If you need to unclog a toilet, that’s pretty straightforward. If the plumbing problems are outside, that’s a much bigger deal because it means you are dealing with burst pipes or leaky sewer lines. The more involved the repair, like replacing pipes or digging trenches, the more expensive the project. While unclogging the toilet will cost you a couple of hundred bucks, if the problem is further down the line, like branches growing into the pipes, it bumps up to several thousand dollars.

The final factor in determining costs is the location of the affected pipes. If the plumber can reach the impacted area by digging a trench in the yard or going under the house, that’s cheaper than going under the slab or even a wooden deck.

Can Better Plumbing Save You Money in Broken Arrow?

There’s no question that updating your pipes, appliances, and fixtures can save you money. Here are some of the ways how.

Old homes, like those built before the 1990s, have older pipes that may not meet modern building codes. Lead, cast iron, and galvanized pipes were common before the 1970s, and each has its problems. Lead was used for solder as well as pipes, and the toxins leached into the water flowing through the pipes. It wasn’t completely banned until 1986. Galvanized pipes aren’t a whole lot better; the zinc that lines the iron erodes over time and the pipes rust, leading to rust in the water as well as weakened pipes from the corrosion of the rust. The polybutylene pipes that were so popular in the 1970s turned out to allow oxidants in public water utilities to react with the plastic in the pipes, causing flaking and cracking. These pipes were common in the 1980s and 1990s and should be replaced before they fail completely.

If you replace failed pipes in your home, you automatically increase their value because you are compliant with the latest codes and have invested in the safest materials on the market. Cast iron, Polyvinyl chloride (PVC), and chromed brass are good for plumbing the wastewater lines. Galvanized iron, copper, and Chlorinated PVC (CPVC) are the best options for the incoming water supply lines.

You can also replace your appliances and fixtures with modern, energy-efficient models. Not only will you save money in water usage and power costs, but there are several appliances that carry a tax rebate.

When Should You Call the Water Utility Company in Broken Arrow vs Hire a Plumber?

When Do You Need Permits for Plumbing Service in Broken Arrow ?

Any time you are moving pipes or installing new plumbing you need a permit from Tulsa County. This includes kitchens, bathrooms, laundry rooms, and swimming pools. If your pipe repairs extend under the city streets and the repairs necessitate closing any public thoroughfares, you’ll need a permit for the equipment and crew to access the pipes.

Recent Requests We Received From Customers In Broken Arrow, OK

Walk in tub in Newcastle Oklahoma for my father who had a leg amputated.

Our well is leaking somewhere. Possible pipe burst outside by out well head.

I would like a quote on a water softening system installed.

I need to install a thankless gas water heater in my house.