Looking for an affordable reverse osmosis system in Atlanta, GA? Great! Mr. Blue Plumbing is at your service 24/7. 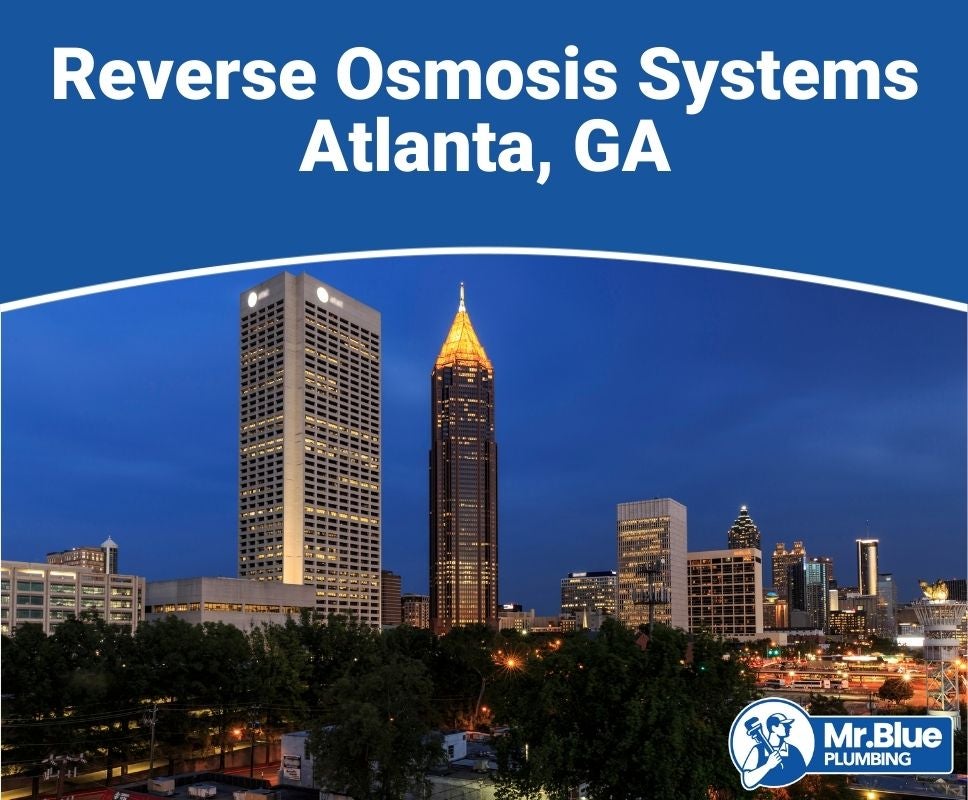 Let us know that you need information on reverse osmosis in the form and we'll get you connected with a Mr. Blue Plumbing expert in Atlanta today!

How Much Does Reverse Osmosis Installation Usually Cost in Atlanta?

The average cost of a reverse osmosis system in Atlanta is $444, including labor, materials, and equipment, but not including permits and taxes. However, there are a number of factors that can either increase or reduce this cost. Here are some things which can impact it.

Generally, most people do not get whole-house reverse osmosis systems, which are very expensive and overkill for most uses. The cost thus depends on the number of faucets you plan on filtering. For some smaller homes, you might put a filter on only the kitchen faucet, but other families may choose to filter, say, upstairs bathrooms, or may have a wet bar in the basement. Each time you add a faucet, you increase the cost.

For a RO system to operate properly, it needs at least 40 psi of pressure and 60 psi is better. If you have consistently low water pressure, then you may need to install a system that increases water pressure, such as a permeate pump. Low water pressure is fairly common in Atlanta, but it may also indicate a problem with your plumbing that needs to be addressed; if we do find a problem or leak, we will recommend fixing it before continuing installation.

Reverse osmosis produces very pure water. However, this can mean that it filters out minerals that are actually desirable for health or water taste. Because of this, some people like to add a system that restores these minerals to the water. Needless to say, this costs more, although many customers appreciate the benefits. In Atlanta, the water is already very soft, so remineralization is less than helpful. However, we can do it if requested to improve the taste of your water.

What Are the Most Common Water Contaminants in Atlanta?

The water in Atlanta is generally of decent quality. Unlike many cities, Atlanta has no lead feeder lines, although there are some lead joints. Lead contamination is still a concern if your home is older and has lead pipes. Point of use reverse osmosis filters (but not whole house) can reduce lead contamination, although replacing lead pipes can significantly increase the resale value of your home and may be worth considering despite the expense, especially with a larger house that is more appealing to families with children. Atlanta’s soft water increases the risk of lead contamination, so you should be particularly careful, especially if you have children.

Atlanta’s water comes from surface sources, with 70% of the water coming from a large reservoir, Lake Lanier. There are also a number of smaller water supply reservoirs as well as a backup store in an old quarry. As it does not come from artesian sources, the water is generally lower in minerals, but higher in turbidity and issues caused by soil runoff from agriculture. Although not in a desert, Atlanta sometimes encounters water shortage issues and also conflicts with states upstream on who gets how much of the available water. Continued population growth may make water shortages more of a problem in the future, and drought restrictions are not uncommon. This can result in low water pressure and water sitting in pipes for longer, possibly picking up contaminants.

There have been significant reports of PFAS in water in various parts of Georgia, including Atlanta. PFAS, which can cause cancer, remains unregulated, which means that levels in water are uncertain. It thus might be a good idea to test your water for PFAS. Reverse osmosis will remove PFAS from your drinking water, as will charcoal filters, but reverse osmosis is generally better for overall water quality and taste.

However, reports of prescription drugs contaminating the water appear to be untrue or, at least, out of date. The study this was based on was in 2008 and more recent tests show that the water is safe. Again, this is something a reverse osmosis filter could help with. (Even in the initial study, the amounts detected were tiny). This is generally not something you should be concerned about, but extra filtering may help your peace of mind.

Finally, because Atlanta’s water comes from surface reservoirs, it is common for it to have turbidity that slightly exceeds the national standards.

Turbidity is essentially how cloudy or murky your water is. It’s caused by clay and silt in the water, that is to say, soil. High turbidity means that there may be contaminants in the water that are stuck or attached to the soil particles. It also affects the appearance and taste of your water. The limit for turbidity is 90, and as of the last test, Atlanta’s water was about 100, so just over the limit. This means that reducing turbidity through filtration is a good idea for Atlanta residents. Some people may consider a whole house system, despite the higher cost, to ensure that they are not bathing in turbid water and to help protect their laundry. However, this is not generally a huge issue. It’s up to you whether you consider it worth the greater cost of a whole house system.

We do not recommend a whole house system if you have lead pipes, as lead contamination will enter your water after it has been filtered.

Can Residents in Atlanta Benefit From Reverse Osmosis Treatment?

The primary benefit of reverse osmosis for Atlanta customers is to reduce “turbidity” in the water. This can have health impacts and affects the appearance and taste of the water. Although typically, turbidity is not a major health issue, there is always the risk that particulate matter from the soil will carry E. coli or other bacteria past the water treatment, essentially allowing pathogenic bacteria to hide. This is rare, but filtering out the particulates will ensure that you don’t get sick from your water. (However, you should still boil water if you have a boil water advisory. Although RO systems can typically be relied on to remove pathogens, they are not 100% and severe contamination should still lead to extra precautions).

Reverse osmosis treatment also removes PFAS, which is not necessarily being tested for due to lack of regulation. It is likely that PFAS will be regulated at some point in the future, but in the interim, the best way to stay safe is to use additional filtration. Even once the chemicals are regulated, reducing levels even further is likely going to be worth it. The jury is still out on the exact risks, but the link to certain cancers appears to be fairly solid.

Finally, a reverse osmosis filter can improve the taste of your water, especially if you tend to be bothered by changes in taste. In addition to contaminants, it removes most of the byproducts of disinfection, which is particularly important in Atlanta. Unlike many places, Atlanta still uses chlorine as the primary disinfectant. While chlorine is not considered a health hazard to most people in the amounts used, it definitely results in an unpleasant taste. Chlorine can also cause problems for people with reduced thyroid function, as can the fluoride put in water to help protect your teeth. The filter will reduce the levels further, helping protect your health and resulting in clearwater that tastes great.

Overall, the primary reason to buy a reverse osmosis system in Atlanta is to remove turbidity, but removing chlorine from the water is also a concern for many residents. Reverse osmosis also generally improves the taste of your water and the additional mineral removal is not a concern given how low the mineral content already is.

How Often Should Residents in Atlanta Replace Reverse Osmosis Prefilters?

Because of the water source, Atlanta’s water tends to have higher turbidity. Prefilters primarily protect your reverse osmosis system by catching particles in the water. Higher turbidity means that your prefilters may need to be replaced more often.

The manufacturer of your system will provide guidelines for how often filters should be replaced, but in Atlanta, you should err towards the lower end of the replacement window. Replacing your prefilters more often will save you money in the long term by protecting the health of your system and also by reducing the amount of water it wastes.

With most systems, the recommendation is to replace pre filters every six months to one year, but in Atlanta, we often recommend a six-month replacement cycle. The actual filters should be replaced about every other year. Again, there may be some variance by system and you should check the manufacturer’s recommendations.

Prefilters should also be replaced after a boil water advisory or contamination alert, especially if it involves large particulate matter. It is common for this to clog filters and replacing them will keep your system from using extra water.

Do You Need a Water Softener With Your Reverse Osmosis System in Atlanta?

Atlanta is one place where you can be confident that you do not need a water softener. Because the water comes from a river, it does not have time to collect a lot of minerals. Atlanta’s water is generally considered very soft, with a typical measure of 20 (Anything under 60 is soft).

In fact, Atlanta’s water is so soft that it can cause some issues. Specifically, it is more likely to leach contaminants out of lead pipes, making it even more important that older homes with lead have point of use reverse osmosis filters. Also, some minerals in water are beneficial, and if your water is very soft, you may want to supplement calcium and magnesium. But no, you should not need a water softener, as the water is already pretty much as soft as you are going to get.

Recent Requests We Received From Customers In Atlanta, GA

I would like to obtain a quote for a whole house RO filtration system. We have one bathroom and our house is ~1800SF. Thanks!

RO system- would like to keep faucet fixtures and not add new fixture.

Pilot light on water heater is out.

Need an estimate for repairs.